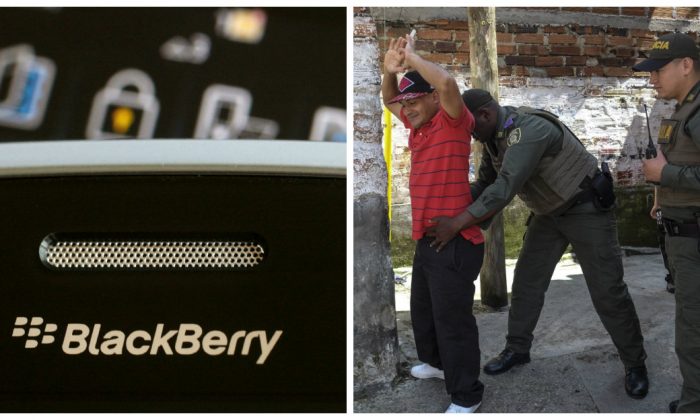 An illustration of a  BlackBerry smartphone. (Reuters/Bobby Yip/File Photo) / Policemen frisk a man in Medellin, Colombia, on October 3, 2017. Medellin's neighborhoods have been increasingly suffering from drug-related violence from gang and paramilitary groups, some of whom may be benefiting from modified BlackBerry smartphones to evade law enforcement. (Joaqin Sarmiento/AFP/Getty Images)
Companies

Vincent Ramos of Richmond, B.C., was arrested March 7 in Bellingham, Wash., near Seattle, and faces criminal charges filed with a U.S. district court in San Diego, Calif. Those records are sealed.

Authorities continue to seek four other suspects from various countries.

They allege that Phantom Secure, which bills itself as “the world’s most trusted communication service,” advertised its products as impervious to decryption and guaranteed that evidence on a device could be destroyed remotely if it was compromised.

The Department of Justice said the case is the first time the U.S. government has targeted a company and its principals “for knowingly and intentionally conspiring with criminal organizations by providing them with the technological tools to evade law enforcement and obstruct justice while committing transnational drug trafficking.”

The Canadian Press hasn’t been able to contact Ramos or his lawyer for comment. None of the charges against Ramos have yet been proven in court.

However, the Phantom Secure website has a notice that says it’s a “law-abiding company” that was founded to provide businesses and people the opportunity to communicate in private in this modern technological age.

Ramos faces charges of racketeering conspiracy, also known as RICO conspiracy, and conspiracy to aid the distribution of narcotics. Both carry a maximum penalty of life in prison.

A partially blacked-out affidavit by an FBI special agent and attached to the warrant to arrest Ramos, alleges that Phantom Secure devices and services were “specifically designed to prevent law enforcement from intercepting and monitoring communication” and its corporate structure was set up to “obstruct, impede, and evade law enforcement.”

It alleges that the company’s marketing material promotes Phantom Secure’s technical team modifying BlackBerry handsets by removing the microphone, GPS navigation, camera, internet and messenger service, and then installs encryption software on an email program routed to servers in countries such as Panama.

“According to law enforcement sources in Australia, Canada, and the United States, Phantom Secure devices are used by the upper echelon members of various transnational criminal organizations to communicate with their criminal compatriots and conduct the illegal activities of the organization,” the affidavit said.

The affidavit also includes a transcript of an exchange between an undercover RCMP agent posing as a drug trafficker and an unidentified Phantom Secure employee who wiped supposedly incriminating data from a modified BlackBerry.