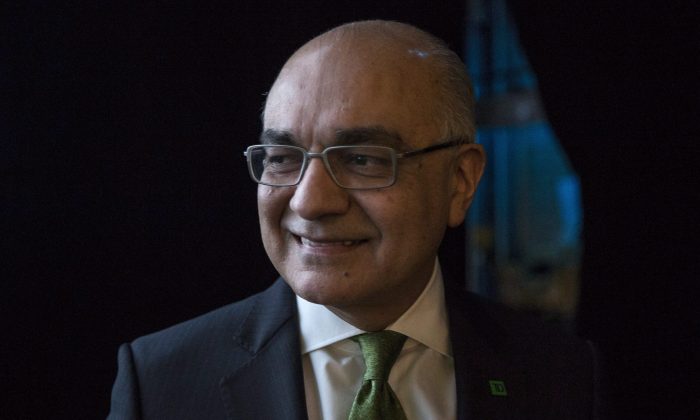 Although many of the banks are on track to deliver record earnings results this year, their shares have taken a beating in recent months due to concerns about how the plummet in the price of crude will affect their loan books.

The S&P/TSX Capped Financial Index, which includes the five big banks, has declined more than 10 percent from its highs of late November.

Speaking at Scotiabank’s Financials Summit on Wednesday, Sept. 9, the chief executives of several of the banks sought to reassure investors that their loan books are strong enough to weather the storm of potential oil patch credit losses and that growth is still possible, even in a sustained low oil price environment.

“Yes, there’s headwinds, but the bank has always been positioned to manage through these situations,” Masrani said, noting that TD still sees opportunities to grow.

He added that the lender’s geographic positioning on the Eastern Seaboard of the United States allows it to benefit from the plunge in energy prices.

The banks also emphasized how cost-trimming initiatives will allow them to grow earnings, even in an environment where it’s hard to increase revenue.

“What’s really going to be key for us is getting the entire leadership team to agree to stop doing stuff that’s not going to add value to banking,” said Victor Dodig, chief executive at CIBC.

David McKay, the chief executive of Royal Bank of Canada, emphasized how digitizing certain manual processes and the institution’s back office functions has allowed the bank to keep expenses in check.

“If you look at the retail bank over the last four or five years, we’ve grown by 40 percent, yet our costs are roughly the same,” said McKay. “We’ve really driven our cost structure very aggressively.”

McKay added that RBC’s wealth management business is a decade behind the retail bank in digitization, which presents an “enormous opportunity” for the bank to trim expenses.

“I think the performance of the Canadian banking sector will continue to surprise on the positive side.”