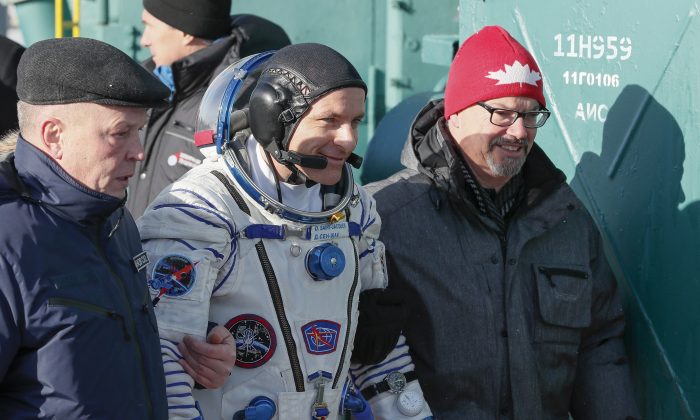 CSA astronaut David Saint Jacques walks to the rocket prior to the launch of Soyuz-FG rocket at the Russian leased Baikonur cosmodrome, Kazakhstan on Dec. 3, 2018. (AP Photo/Shamil Zhumatov, Pool)
Canada

MONTREAL—Canadian astronaut David Saint-Jacques won’t be carrying much with him when he leaves Earth to blast off to the International Space Station on Dec. 3.

If all goes according to plan, he will take off at 6:31 a.m. Eastern time from the steppes of Kazakhstan on the first manned Russian rocket launch since a dramatic aborted Soyuz failure in October.

What does one bring to space? A small shoebox containing items such as wedding rings and a watch.

“I brought a few personal items that remind me of my family, of my children, of my parents, my wife and the people I love on the planet, so they’re mainly mementoes,” he said recently, adding that his luggage has already been sent ahead.

There will also be a few Christmas presents, which he’ll unwrap as his family watches him back on Earth, his wife Veronique Morin said last week.

The 48-year-old doctor and astronaut has spent years training for the six-month mission, which was originally scheduled for Dec. 20 but was moved up after the aborted Soyuz launch.

Aboard the station, his role will include conducting a number of science experiments, some of which will focus on the physical effects of the weak gravity astronauts experience in orbit, as well as how to provide remote medical care.

And while he’s likely to keep in touch, he says Canadians shouldn’t expect a repeat of the out-of-this-world guitar performances that brought his predecessor Chris Hadfield international fame during his own stint on the space station in 2013.

“I don’t think I’m going to try to top what Chris did in terms of entertainment—that is his forte,” Saint-Jacques said on Nov. 29.

“We each go there with our own personalities and our own ambitions.”

People all over the world are expected to watch the launch on Dec. 3 with extra attention, given the fate of the previous mission.

The crowd on the ground in Kazakhstan will include members of Saint-Jacques’ family as well as Governor General Julie Payette, herself a former astronaut.

In an interview, Payette expressed confidence in Saint-Jacques and the technology that will bring him to space.

“David is exceptional…. He’s been working for years, and he fully deserves it,” Payette said, adding that the fact that the launch has been moved up “demonstrates to what point everyone has complete confidence in the equipment that’s leaving.”

Payette, who completed missions to the space station in 1999 and 2009, knows what to expect during the drama of the launch.

“It shakes, as they say,” she said. “It’s very powerful—a rocket that’s leaving Earth’s gravity, and it’s very impressive for a spectator. In fact, it’s very emotional when you know there are people aboard.”

She said the most dangerous moments will come in the moments following the launch, as the rocket passes through several “critical zones” on its way into space.

Payette would not say whether she’d offered Saint-Jacques advice, saying only that astronauts are a tight-knit group.

“We’re very few in Canada, they can be counted on the fingers of two hands,” she said.

But while the list of astronauts may be small, both Payette and Saint-Jacques emphasize the strength and importance of Canada’s space contributions.

“I believe that Canada has a big role to play in that community,” Saint-Jacques said. “To me, it’s the kind of innovative, creative, bold Canada that I would like my children to live in—Canada is there to stay in space.”