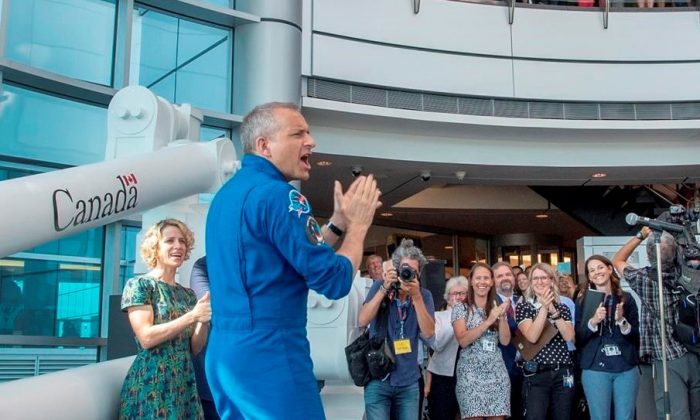 LONGUEUIL, QB.—Canadian astronaut David Saint-Jacques says returning to normal life after his six-month stint aboard the International Space Station feels anything but mundane.

In his first time back in Canada since landing June 24, Saint-Jacques said Wednesday the mission has given him a renewed sense of love for the “extraordinary, varied, and complicated” details of life on Earth.

“I had the chance to have a very full mission where I accomplished everything I could have dreamed of, so I leave without any regrets,” he said. “I left full of renewed love for life on Earth.”

Saint-Jacques said his three children helped him with the transition by reminding him of all the things he’d missed, including feeling the wind and tasting fresh fruit.

“It makes you want to live more simply.”

Saint-Jacques was met with thunderous applause as he returned to the Canadian Space Agency headquarters near Montreal.

Space agency staff chanted his name as he returned just a few weeks removed from a 204-day mission aboard the station—a Canadian record for longest single space flight.

In a news conference, the 49-year-old astronaut said he’s enjoying spending time with his wife and children, and taking a trip to his parents’ cottage in Quebec as he continues to recover from the effects of space flight.

While Saint-Jacques said he wasn’t having trouble adapting mentally since his June 24 return, physically he is still adjusting to life on Earth. He said space flight affects nearly every part of the body, from blood circulation to his head to the bottoms of his feet, which had become soft and smooth after months of not bearing his weight.

He said his balance is improving, although he’s still suffering from dizziness and a kind of lightheadedness that he described as “space fog.”

“You lose the sense of gravity (in space), and that completely confuses the brain,” he said.

Thus far, he says he hasn’t experienced any pain or vision problems, and only “normal” bone loss. He said the effects of radiation, which could make him more prone to cancers, will only be known with time.

Saint-Jacques was greeted on Wednesday by Innovation Minister Navdeep Bains, who described him as “a Canadian hero.”

Bains highlighted the importance of the research that Saint-Jacques conducted in space, and its ability to help people on Earth.

Researchers were able to measure his vital signs through a “smart shirt” biomonitor that has implications for long-distance medical care, as well as study the effects of zero gravity, which is similar to what’s experienced by bedridden patients, Bains said.

“Your work not only inspires Canadians, it truly benefits all of humanity,” he said.

Bains also credited Saint-Jacques with inspiring a new generation to develop a passion for space and science through his stunning photographs of Earth and his conversations with schoolchildren.

As he answered questions from space agency staff and students, Saint-Jacques said he’s still digesting the mission. In the short term, he’s focusing on rehabilitation. In the long term, he plans to return to Houston to renew his lapsed certifications and resume his career in the space program.

He also gave a presentation in which he showed off personal photos and recounted some of the highlights of his trip, which included becoming the first Canadian astronaut to use the Canadarm2 robotic arm to perform a so-called “cosmic catch” to snag a SpaceX cargo capsule, as well as performing a six-and-a-half hour spacewalk.

He described leaving the station in his space suit, “with just my visor between me and space,” as an emotional moment. But rather than feeling small and insignificant, he said, the moment was a reminder of the breadth of human knowledge and the dedication of the team that got him there, both in space and on Earth.

“It was very emotional to be able to be this extension of humanity in this completely hostile place…I didn’t feel alone,” he said.