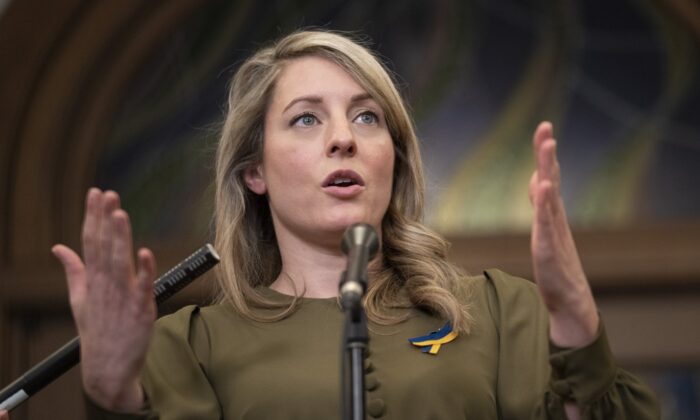 Foreign Affairs Minister Melanie Joly responds to questions in the Foyer of the House of Commons in Ottawa, March 15, 2022.(The Canadian Press/Adrian Wyld)
Canada

The Canadian Armed Forces should be better equipped to face new challenges in light of the Russian invasion of Ukraine, Foreign Affairs Minister Mélanie Joly said on Friday.

Speaking at the University of Toronto’s Munk School of Global Affairs and Public Policy, Joly said there are new challenges on the world stage after Russian President Vladimir Putin decided to start a war against Ukraine.

“It is important for our military to be better equipped. It is important because the world has changed. And we need to be able to face the new challenges,” she said.

“We take stock of what Germany has done, which has increased its military and defense budget. And in that sense, I think that we need to work with the Armed Forces to make sure we are ready.”

Joly added that NATO and Canada are ready to face any further Russian aggression.

“NATO has been making sure that we’ve reinforced the eastern flank,” she said. “Canada has stepped up to the plate to make sure that we would be providing more forces and obviously this is a top priority for government.”

Finance Minister Chrystia Freeland has hinted that more money may be coming for the military in the upcoming federal budget.

The Russian invasion of Ukraine has unified western nations like never before and strengthened NATO’s alliance, Joly said, adding that “there’s nothing like having one villain” to unite against.

“President (Vladimir) Putin sought to divide the West and exploit our differences, but we are more united than ever,” she said.

Canada is working with its allies in the G7 and NATO to send military equipment to Ukraine, Joly said.

“It’s important for … Ukrainians to be able to defend themselves and to stop the bombing of civilians, but also it has an impact on the diplomatic side, because it is a way for Ukraine to be stronger at the negotiation table,” she said.

Joly reiterated that the federal government is willing to bring in unlimited numbers of Ukrainian refugees and officials are looking at possible airlifts from neighbouring European countries to bring individuals to Canada.

Canada is also helping eastern European countries hosting Ukrainian refugees, including Moldova, Romania and Poland, through its funding to the United Nations’ agencies that are helping the refugees, Joly said.

“We’ve provided $200 million in terms of humanitarian aid. We’re working with the UN, and its different agencies, including the UNHCR,” she said. “Particular interest and support should be given to Moldova because it’s one of the poorest countries of Europe.”

More than 3.5 million people have fled Ukraine so far during the 23-day Russian invasion.