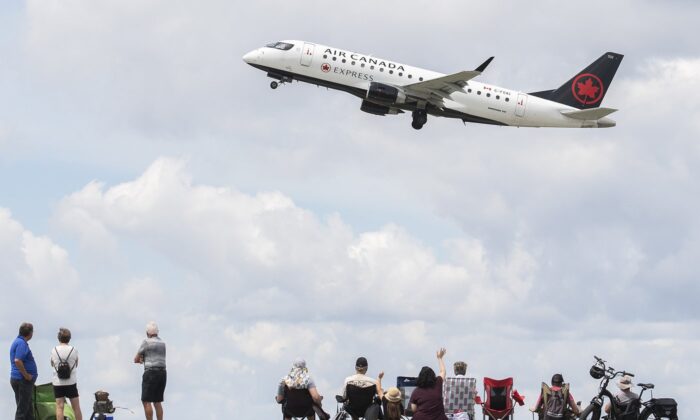 Canadian airlines and airports claimed top spots in flight delays over the July long weekend, notching more than nearly any other around the world.

Air Canada ranked No. 1 in delays on Saturday and Sunday as two-thirds of its flights—717 trips in total—landed late, according to tracking service FlightAware. At 67 percent on Sunday, it was more than 14 percentage points above the three carriers tied for second place, two of which are Air Canada-affiliated.

Jazz Aviation—a Halifax-based company that provides regional service for Air Canada—and the lower-cost Air Canada Rouge both saw 53 percent of flights delayed, putting them in the No. 2 spot alongside Greek regional carrier Olympic Air on Sunday.

On Saturday, WestJet and budget subsidiary Swoop placed third and fourth at 55 percent.

On the airport front, Toronto’s Pearson claimed the No. 2 spot Sunday after 53 percent of departures were held up, below only Guangzhou’s main airport in China. Pearson beat out Charles de Gaulle airport in Paris and Frankfurt Airport in Germany.

Montreal’s airport placed sixth Sunday at 43 percent of takeoffs delayed, on par with London’s Heathrow, according to FlightAware figures.

Air Canada said last week it will cut more than 15 percent of its summer schedule, or nearly 10,000 flights in July and August, affecting hundreds of thousands of passengers as the country’s aviation network sags under an overwhelming travel resurgence.

Bookended by statutory holidays in Canada and the U.S., the weekend saw scenes of long lines and luggage labyrinths flood social media as airports across the globe grappled with the start of peak travel season following two years of pent-up demand.

Passenger flow at Canadian airports is already at 2019 levels during peak times, though closer to 80 percent of pre-pandemic volumes overall, experts say.

“This is going to be with us all summer,” said Helane Becker, an airline analyst for investment firm Cowen.

“Almost every airline encouraged people to retire early or take leaves. And those people that retired early maybe don’t want to come back to work,” she said of airline employees.

“It’s hard to rebuild off those lows.”

Some pilots have not yet had their licences renewed, while positions with groundcrews and baggage handling remain unfilled—or quickly vacated—due to low wages and stressful work conditions, unions say.

Government agencies have been on a hiring spree for airport security and customs, with 900-plus new security screeners in place since April—though not all have clearance to work the scanners—according to the federal Transport Department.

Air Canada has hired more than 2,000 workers at airports and more than 750 in customer service centres this year for a payroll surpassing 32,000—93 percent of 2019 levels.

“The airlines also used the pandemic to eliminate aircraft types from their fleet, and to ground and retire their oldest aircraft. It’s hard to bring these aircraft back once you park them without doing a lot of maintenance,” Becker added.

“As demand continues to surge, we’re basically looking at an inability for the airlines to easily accommodate it. And I think that’s true worldwide.”

In a memo obtained by The Canadian Press, Air Canada CEO Michael Rousseau warned staff on Wednesday night that “this Canada Day weekend will be difficult.”

The schedule streamline likely won’t have the airline “see the full benefit until the latter part of July,” he said.

In an email to passengers the same evening, Rousseau apologized for cancellations and “customer service shortfalls” but also said the flight reduction stemmed from strains on the “global aviation system,” calling them “unprecedented and unforeseen.”

Since January, Canada’s two biggest airlines or their affiliates have made up five of the top seven airlines for proportion of flights delayed, according to FlightAware.

The swelling crowds at international arrival areas prompted the Greater Toronto Airports Authority’s fire chief to issue a directive that warned of a potential “hazard” caused by clogged exits and “life safety concerns.”

“Passenger congestion in the Arrival Transfer level of Terminal 1 and Terminal 3 continues to exceed acceptable levels at certain times, which is due in part to some air carriers not following the Hold Procedure that is in effect for the purpose of maintaining safety in the terminal buildings,” warned Todd Aitken in an order dated June 23 and obtained by The Canadian Press.