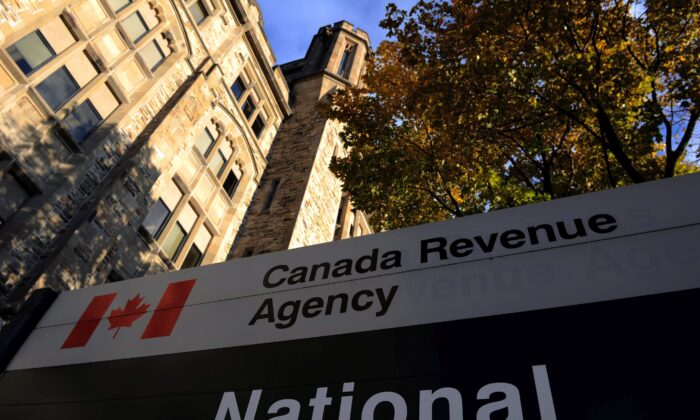 The Canada Revenue Agency headquarters in Ottawa, in a file photo. (The Canadian Press/Sean Kilpatrick)
Viewpoints

Canada’s Tax System: A Monstrous Labyrinth That Needs to Be Simplified

Do you have a grumpy accountant? If not, perhaps you don’t live in Canada. But if you do, you probably need one. You shouldn’t.

George and Winokur want to put themselves out of business. And here, as surprisingly often, it may be necessary to explain to Canadians that they are being ill-used. In this case because the tax system they take for granted, as part of the price we pay for living in a world-class country, is in fact a scandal.

Like long waiting lists for medical procedures, the length of the tax code, complexity and instability of its rules, vast budget of the Canada Revenue Agency and its aggressive and obtuse procedures, and the need to file tax returns is all an unnecessary aggravation, a failure of governance, and a breach of the social contract.

Wait a minute, you cry. The need to file tax returns? Didn’t Oliver Wendell Holmes Jr. say “Taxes are what we pay for civilized society”? Are you some sort of nutbar libertarian?

OK, maybe you didn’t all cry the Holmes bit. But yes, he did, in 1927. Yes, they are. And no, I’m not a nutbar who thinks either taxes or government unnecessary. But the need to pay taxes is not the same as the need to pay excessive taxes in a system so monstrous it would inspire envy in whoever created the rack. And as Winokur points out, there are plenty of civilized countries where most people do not file tax returns.

No, really. Their employers simply file the local equivalent of the T4 which tells the government what they earned, so it applies the appropriate rate. Here you get penalized for not submitting a T4 they already have. Crank that thing a little more, willya? Whereas in exotic locales like, well, England, 90 percent of taxpayers do not have to file a return. In Sweden, 74 percent. And in Estonia it takes on average five minutes to file one.

Canadians are a little too used to be treated like dirt beneath the government’s feet. If you try to call the Canada Revenue Agency you can’t get through but receive a stern automated warning not to seem ungrateful if you somehow hang in for, say, 90 minutes and finally get an agent. And don’t be rude because they will hang up, and because I actually feel sorry for CRA agents dealing with scared, frustrated people all day. But why should we be either? And for so long?

Some Canadians actually feel fortunate to get a tax “refund,” as if the government did us a favour by eventually repaying the principal on an involuntary, no-interest loan. Whereas if the CRA thinks you owe them money, hoo hah on the eventually, the no-interest, and the manners.

Then there are all those tax credits. Politicians love them, including a man once suspected of being a nutbar libertarian who turned out not to be a libertarian, Stephen Harper, because they let you “microtarget” voters. Which is not the purpose of a tax system and in his case didn’t even work. But I digress.

No. I don’t. As the grumpy commentator I want all kinds of changes to governance in Canada, including conservative parties making conservative critiques on biggies like climate and euthanasia. But if those things are too much to ask, can we at least simplify the tax system? Is it so controversial?

There is no principled argument for it being a labyrinth complete with bureaucratic minotaur. People hate it. Even accountants, a vast and lucrative industry in Canada because of both labyrinth and minotaur, hate it. Economists hate it. And if politicians love it anyway, well, feel free to hate them too. Especially as it’s not a new issue.

As Winokur grumps, our tax system hasn’t had a fundamental re-examination since the Leafs last won the cup. But it hasn’t sat still. The GST was added, infuriating a populace who preferred a less efficient less visible tax. But the basic exemption for small businesses to become unpaid tax collectors was $30k in 1991 and today… still is. Is it fair? Logical? Open to debate?

Our tax code is some 3,000 pages long, over a million words prone to shape-shifting. Yet no party advocates cutting it to 300, rationalizing social assistance, or letting most salaried Canadians avoid accountants, tax-filing software, and fear and loathing every April 30.

If they do it to us, and we let them, at least drop the pretense that we even want good government. And get grumpy.