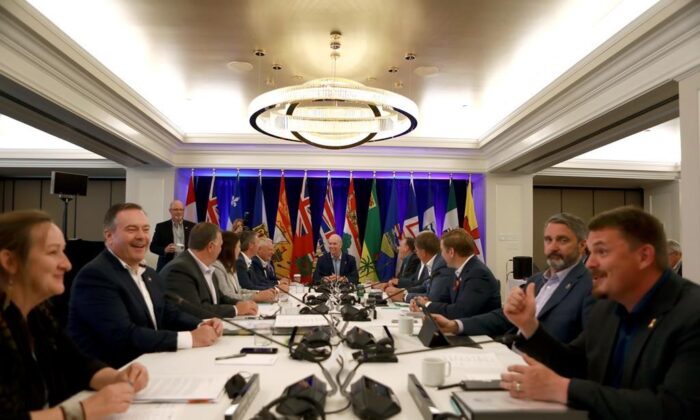 Premiers mingle during a photo op while at the summer meeting of the Canada's Premiers at the Fairmont Empress in Victoria, on July 11, 2022. (The Canadian Press/Chad Hipolito)
Canada

VICTORIA—Canada’s premiers are meeting again today in Victoria after a day of talks dominated by health care.

Affordability issues and economic recovery are among the other topics on the table during the Council of the Federation’s summer meetings, which wrap up today.

On Monday, the premiers called on the federal government to boost its share of health−care funding to 35 percent from the existing 22 percent amid staffing shortages.

B.C. Premier John Horgan, who chairs and hosts the council, says the health−care system need to be reimagined with a plan for sustainable human resources and stable federal funding.

He says it’s been eight months since the federal government promised to sit down with the premiers to come up with a strategy to restore the health−care system and that meeting is overdue.

Horgan says the premiers are also sharing ideas for combating inflation and skyrocketing costs of living, and they hope to see significant federal support in that arena as well.

“The ideas in Quebec are as valid there as they are in British Columbia,” Horgan said Monday.

While some of the causes are global, like the COVID−19 pandemic and Russian aggression in Ukraine, the impacts are local and require sustained intervention, he said.

“These are seismic issues that are rocking the international economy and we’re not immune to that. But collectively, working together to find best practices — what can we do in our respective jurisdictions — and most importantly how can we collaborate with the federal government on meeting these challenges.”