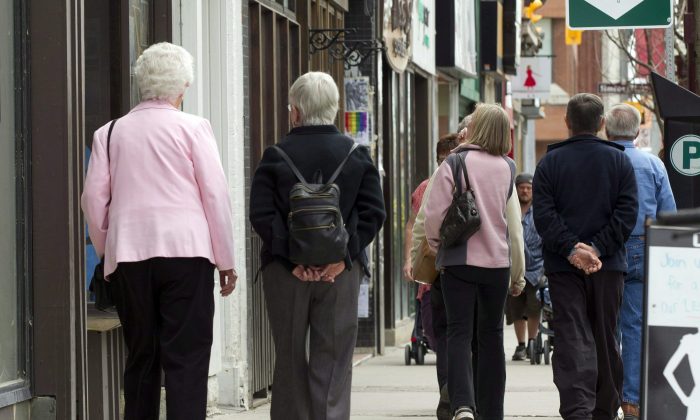 Senior citizens make their way down a street in Peterborough, Ont., May 7, 2012. (The Canadian Press/Frank Gunn)
Canada

Canada Will Have More Seniors Than Children Within 10 Years, Feds Say

Canada’s senior population is set to outpace its number of children by 2030 due to the country’s increasing average age combined with its low fertility rate, says a federal government report.

In the 2020 “Actuarial Report On The Old Age Security Program” Canada’s chief actuary, Assia Billig, projected that the country’s population made up of citizens aged 0-19 will gradually decrease over the next eight years until it finally dips below the number of Canadians aged 65 and older in 2030, as first reported by Blacklock’s Reporter.

Statistics Canada (StatCan) also said in a recent report that over 25 percent of the population will be aged 65 or older by 2068 and that the population made up of citizens aged 85 and older will triple in just over 40 years.

“While less evident in some projection scenarios that favour higher immigration, lower life expectancy and (above all) higher fertility, the aging of the population very much remains a reality, and thus seems to be unavoidable over the next 50 years,” said StatCan in its 2022 report “Population Projections for Canada, Provinces and Territories, 2021 to 2068.”

Meanwhile, StatCan still expects its overall population to grow significantly over the next 50 years due to increasing immigration numbers.

Canada’s population in 2021 was just over 38 million, but the federal government expects that number to reach over 50 million by 2043, before increasing to as much as 74 million by 2068, according to a high prediction.

StatCan said that immigration is “expected to remain the main driver of population growth” over the next 50 years, but that the rising immigration rates will still be unable to balance Canada’s youth-to-elderly ratio.

“Immigration is unable to significantly increase the proportion of youth in the population,” said StatCan. “This means that Canada will remain dependent on high immigration levels to renew its population, particularly in the context of a low and recently declining fertility rate.”

Canada’s fertility rate has dropped so significantly in recent years that its “children per woman” number—a measure of birth rate—dipped to just 1.4 in 2020, which was a new record low.

Furthermore, StatCan predicts that Canada’s natural growth rate—determined by calculating its total number of births minus deaths—will decrease in both the short and long-term future, and could even become negative during a nine-year span between 2049 and 2058.