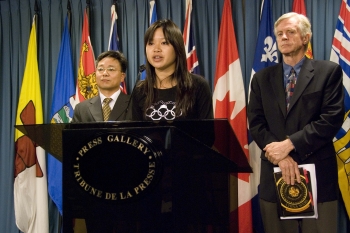 Borlongan said the organization procured a recorded conversation on June 23 between a Eutelsat employee in Beijing and someone the employee thought was an official of the Chinese regime’s propaganda department.

“The conversation exposes that the CEO of Eutelsat, Giuliano Berretta, stopped NTDTV’s broadcast under pressure from the Chinese regime,” she said.

Founded in 2001, New York-based NTDTV is an independent, not-for-profit station that has been broadcasting via satellite into mainland China and across Asia since 2004. It is the only Chinese-language media broadcasting news into China that is uncensored by the communist regime.

She noted the station’s in-depth coverage of the Chinese regime’s human rights abuses against Tibetans, underground Christian churches, Falun Gong practitioners and others —“taboo subjects” that are “heavily, heavily censored in China”

One of the results of China’s tight media control, said Borlongan, is that the current generation of Chinese students is starting to look at the Tiananmen Square massacre of 1989 as a “Western myth.”

Eutelsat has been attempting to sign lucrative contracts with China for several years. In the recorded conversation, the employee said Eutelsat had "received complaints and reminders from the Chinese government" about NTDTV, and Chinese authorities had told Eutelsat two years ago to “turn it [NTDTV] off before we can talk.”

NTDTV’s coverage of the regime’s human rights abuses and corruption has made it a target for interference and blockade by the Chinese Communist Party, in Canada as well as in other countries.

“Chinese representatives in Canada have tried all means to interfere with NTDTV’s business,” said Joe Wang, president of NTDTV Canada.

Wang noted a document smuggled from the Chinese embassy and obtained by The Epoch Times that revealed embassy officials had attempted to influence the CRTC and Rogers Cable not to air NTDTV in Canada.

NTDTV now has a contract with Rogers along with a verbal commitment and a set date to launch in Canada, said Wang. “We hope Rogers will honour its commitment soon,” he added.

David Kilgour, former Secretary of State for Asia-Pacific, also spoke at the press conference. He said when Mr. Berretta tried to cut off NTDTV to obtain more business from China in 2005, nearly 60 Canadian MPs and Senators co-signed a letter that helped stop the decision.

The letter said that despite promising greater media freedom after being awarded the Olympics, China has instead intensified censorship, and noted that it is therefore even more crucial for Eutelsat’s “open satellite window” to remain open and to expand to allow NTDTV and other independent channels to broadcast to East Asia.

Borlongan said if NTDTV’s broadcast is not resumed immediately, “none of the TV companies that are Eutelsat’s clients will ever be sure they could not also be arbitrarily disconnected one day because of their content.”

Wang urged the government and the Canadian people to put pressure on Eutelsat to resume NTDTV’s broadcast to China immediately.

“With support from the free world, we will be able to re-open this free flow of information to millions of Chinese citizens.

“China will become a world power and a world power with freedom is a plus for humanity and the world. But for freedom to come, people have to be informed, and this is what NTDTV is doing [in China.].”