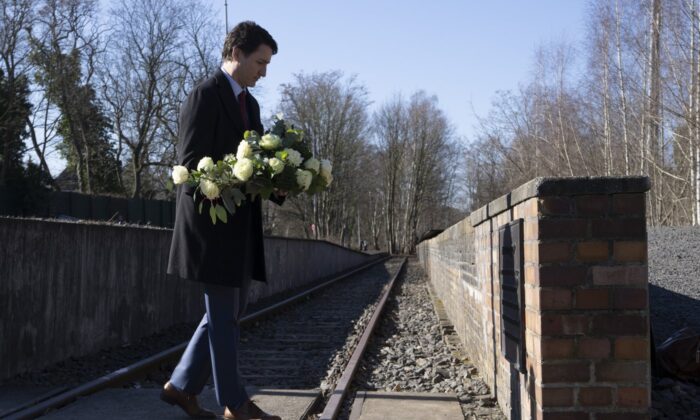 Canada Sending Another $50 Million in Specialized Equipment to Ukraine: Trudeau

Canada is sending another $50 million in specialized equipment, including Canadian-made cameras for surveillance drones, to help Ukraine defend itself against the Russian invasion, Prime Minister Justin Trudeau said Wednesday.

Trudeau was in Berlin for meetings with Chancellor Olaf Scholz largely about the response to Russia and ongoing needs to support Ukraine. But from Berlin he spoke by phone to Ukrainian President Volodymyr Zelenskyy to inform him of the additional aid.

“We have obtained a number of specialized equipment, including cameras used in drones that a Canadian company makes that we will be able to start sending in the coming days towards Ukraine,” Trudeau said during a news conference with Scholz.

Canada previously said it was shipping non-lethal equipment such as body vests and helmets, as well as more than $10 million of weapons such as machine-guns, rocket launchers and hand grenades.

Trudeau acknowledged getting the equipment into Ukraine has not been easy.

“There are challenges at the borders in terms of getting equipment securely across and into Ukrainian hands,” he said. “But we are working through that with partners alongside all allies who are facing the logistical challenges that are real, but not insurmountable.”

On Twitter, Zelenskyy said the conversation with Trudeau focused on how to increase sanctions and pressure on Russia.

“Agreed on further diplomatic steps,” he said. “Canada stands with Ukraine. We feel it every day.”

It was Trudeau’s first conversation with the Ukrainian leader in six days. Trudeau has praised Zelenskyy’s resilience and leadership as his forces try to fend off an invasion by the largest military in Europe.

The call came 14 days after Russian troops began pouring into Ukraine in an invasion the Office of the United Nations High Commissioner for Human Rights says has now killed more than 400 civilians.

On Tuesday, Zelenskyy released a new video showing him standing near the presidential offices in Kyiv in front of piles of sandbags, a few cars and a snow-dusted fir tree.

It was Zelenskyy’s second video in 24 hours showing him near the country’s seat of power, apparently made to dispel any doubts about whether he had fled the city.

After the call, Trudeau paid a sombre visit to Berlin’s Platform 17, a memorial that marks the railway station where 50,000 Jews were deported to ghettos and labour and concentration camps during the Holocaust.

The visit was poignant given that Russian President Vladimir Putin has falsely justified his attack on Ukraine because he says he is trying to save the country from Nazis.

Trudeau paused silently for a few moments after laying flowers near a plaque at the end of the platform, and made the sign of the cross before leaving. He did not speak to reporters.

Trudeau’s discussion with Scholz was the first in-person meeting for the two since Scholz replaced longtime chancellor Angela Merkel in December.

They discussed the need for an immediate ceasefire in Ukraine and a desire to end the war without further escalation. They also talked about energy security in Europe, which is heavily reliant on Russian oil and gas but wants to cut its Russian imports by two-thirds by the end of this year.

The logistics of turning to Canada to replace that energy are difficult, so the conversation on energy appeared to focus more on developing clean technology and future sales to Germany of Canadian-made hydrogen.

Hydrogen fuel technology and development is still in the early stages in both countries.

The Prime Minister’s Office said Trudeau will also be meeting with U.S. Vice President Kamala Harris in Poland on Thursday evening to discuss the situation in Ukraine.