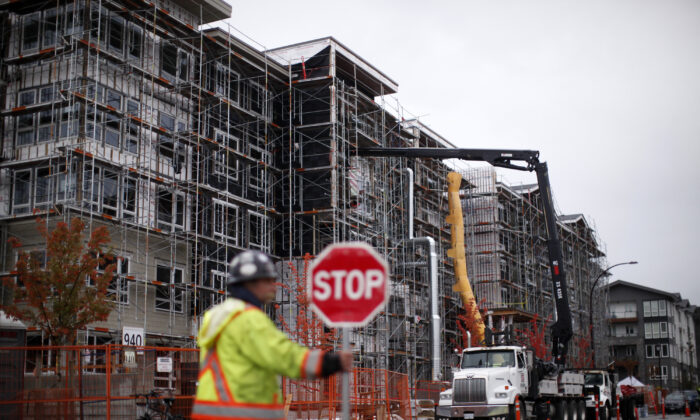 Canada needs 3.5 million more homes to be built by the end of the decade before housing becomes affordable again, a new report says.

The report, published by the Canada Mortgage and Housing Corporation (CMHC) Thursday, says Canada’s approach to housing supply needs to be rethought before housing costs can reach a level where average households spend not more than 40 percent of their disposable income on shelter.

“There must be a drastic transformation of the housing sector, including government policies and processes, and an ‘all-hands-on-deck’ approach to increasing the supply of housing to meet demand,” said CMHC deputy chief economist Aled ab Iorwerth in a statement, released on the same day as the report.

The agency projects that if the current rates of new construction continue, Canada will add an additional 2.3 million housing units between 2001 and 2030, reaching nearly 19 million homes nationally.

But to achieve affordability for all Canadians, an additional 3.5 million homes are needed, meaning hitting a total stock of 22 million homes across the country by 2030, exceeding current projections.

To reach #housing affordability for everyone in Canada, our research estimates that Canada’s housing stock would need to climb by 3.5M to over 22M units by 2030.

The CMHC used 2003 and 2004 as a benchmark on housing affordability, at a period when the economy was stable and housing costs were a relatively low share of the economy, according to the report.

“Around 2003–2004, an average household would have had to devote close to 40 percent of their disposable income to buy an average house in Ontario, and close to 45 percent in British Columbia,” the report said.

“In 2021, such a household would have had to devote close to 60 percent of their incomes to housing.”

“Restoring affordability levels in these provinces means cutting housing costs by between a quarter and two-fifths,” the agency added.

Softening housing market conditions and a labour shortage in the construction sector could get in the way of bringing Canada’s housing stock to more than 22 million by 2030, however.

“There are supply issues, labour shortages at the moment, and the cost of financing is going up, so clearly there are short-term challenges,” ab Iorwerth told The Canadian Press in an interview.

In addition, the CMHC report cautioned that “dramatically and suddenly” increasing the supply of housing will put pressure on the costs of construction.

The agency said further study is needed to address those issues, though it proposed redeveloping existing housing structures, industrial structures, and retail spaces into multi-housing units to increase supply without the need for new construction.

The CMHC noted that supply is only one factor among others that affect affordability. Others include government policies that affect demand, choices made by households, and trends toward working from home post-pandemic not considered in the report.

The housing agency also found that two-thirds of the 3.5 million housing gap will be felt in Ontario and British Columbia, two markets that have faced large declines in affordability.

The situation for Quebec is similar, as the report said affordability in the province has declined over the last few years.

In total, Ontario will need 1.85 million more homes built, whereas British Columbia and Quebec will require about 570,000 and 620,000 extra units respectively over the next 7.5 years to bring home prices down.

Cost reductions do not necessarily mean that the value of homes drop, according to ab Iorwerth. In an interview with The Globe and Mail, reported June 23, he provided the example of how four detached homes worth millions of dollars could be redeveloped into hundreds of apartment units, which would lead to an average price decline.

“It doesn’t necessarily mean that anybody would lose out on their housing value,” he said.

With the Bank of Canada set to raise its key interest rate higher to tame inflation, it will deter home ownership in the short run, according to RBC’s “Housing Trends and Affordability” report, published on June 23.

“However, we see the burgeoning price correction eventually bringing some relief to buyers.”

Ottawa Can’t Do It Alone

The CMHC said the federal government cannot achieve affordability for every Canadian on its own.

“We need partners. The private sector will be critical in addressing this supply shortfall,” said the report, adding that governments should make their regulatory systems as efficient as possible so that projects can be approved sooner.

The agency further proposed that governments at all levels must “come together” to help build the supply, though it acknowledged that its plan will fall short for low-income Canadians.

“It’s important to note that even if we do reach these targets, there would still be many low-income households that would face affordability challenges,” the CMHC said.

“Our intent in this work is to look at factors affecting affordability for the average household in Canada rather than low-income households,” the report concluded.