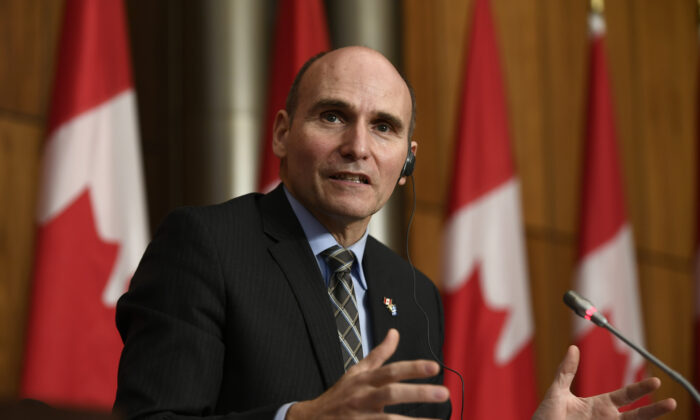 Minister of Health Jean-Yves Duclos speaks during an update on the government’s response to the COVID-19 pandemic, in Ottawa on Dec. 10, 2021. (THE CANADIAN PRESS/Justin Tang)
Canada

The federal government is advising Canadians against non-essential travel to foreign countries amid concerns about the Omicron variant.

Federal Health Minister Jean-Yves Duclos made the announcement at a press conference on Dec. 15.

“To those who were planning to travel, I say very clearly—now is not the time to travel. The rapid spread of the Omicron variant on a global scale makes us fear the worst,” Duclos said.

When asked if Canadians who travel despite the advisory would be subject to quarantine upon returning, Duclos did not answer directly, saying only that additional measures are being considered by the government and mandatory arrival testing will be ramped up in airports.

Despite the House of Commons being under vaccine and mask mandates, and with the majority of MPs having already voted to conduct hybrid sessions with remote attendance, the Liberals announced on Dec. 14 they were further cutting down in-person participation in Parliament due to Omicron.

Government House leader Mark Holland said the Liberals will “greatly reduce” the number of their MPs in the chamber and intend to hold all caucus meetings virtually for the time being.

The concerns seem to stem from Omicron’s high transmissibility and capability to evade vaccine protection—a subject the World Health Organization (WHO) addressed in a recent technical briefing on Dec. 10.

“Preliminary evidence, and the considerably altered antigenic profile of the Omicron spike protein, suggests a reduction in vaccine efficacy against infection and transmission associated with Omicron,” wrote the WHO, based on limited available data.

Trudeau held a call with provincial premiers on Dec. 14, where new measures were discussed to deal with Omicron.

A readout of the call provided few details, but said the PM “consulted premiers on additional border and travel measures that could help slow community spreading, and First Ministers discussed other potential measures to keep Canadians safe.”

The readout reiterated the authorities’ assertion that mass vaccination is necessary to defeat the SARS-CoV-2 virus, which causes COVID-19.

“The Prime Minister and premiers agreed that the key to moving beyond this pandemic is ensuring that as many Canadians as possible, including children, get vaccinated and have access to booster shots, particularly our most vulnerable,” it said.

Combating Omicron with available vaccines could prove to be a challenge, according to emerging research.

The U.S. Centers for Disease Control and Prevention (CDC) published a report on Dec. 10 based on limited data showing that out of 43 cases attributed to Omicron, 34 individuals had received the full course of an approved vaccine and 14 had received a booster shot (with five of the 14 having received the dose less than two weeks before symptom onset).

Six individuals also had a previous SARS-CoV-2 infection, which indicates that 40 out of 43 cases had some form of protection against previous virus strains, which could not stop the highly-mutated Omicron variant.

The CDC said the most commonly reported symptoms from Omicron thus far have been cough, fatigue, and congestion or runny nose. One vaccinated patient was hospitalized for 2 days, and no deaths in the United States have been reported to date, according to CDC data.

A large study from South Africa, where Omicron was first discovered, reported similar findings. Released on Dec. 14, the data is associated with the first three weeks of the Omicron-driven wave in the country.

As for the severity, the study said “The risk of hospital admission among adults diagnosed with COVID-19 is 29% lower for the Omicron variant infection compared to infections involving the D614G mutation in South Africa’s first wave in mid-2020, after adjusting for vaccination status.”

The study was conducted by Discovery Health, South Africa’s largest private health insurance administrator and is based on 211,000 COVID-19 test results in South Africa.

Some provinces have already taken steps to address the spread of Omicron.

In Atlantic Canada, travellers arriving in Prince Edward Island will need to isolate until receiving a negative COVID-19 test and indoor gatherings will be limited to 20 people.

Quebec is asking employers to recommend working from home and is seeking to accelerate its booster shot campaign and make rapid tests available to the public at large.

This last measure is also being pursued by Manitoba and Alberta.

Despite Omicron fears, Alberta Premier Jason Kenney announced on Dec. 15 that the province is loosening indoor gathering limits ahead of the holidays. Previously only two households could gather privately indoors and now any number of households can gather—up to 10 people above age 18, with no limits for those under 18.

“The notion that we could just cancel Christmas, in an excess of caution for the second time … I don’t think reflects what Albertans would be willing to tolerate. So we’re trying to balance these things,” Kenney said in a press conference.

“The public will not, I believe not Alberta, not the rest of Canada, will not accept a permanent, long-term impairment of basic aspects of a free life, and one of those aspects is travel,” he said.