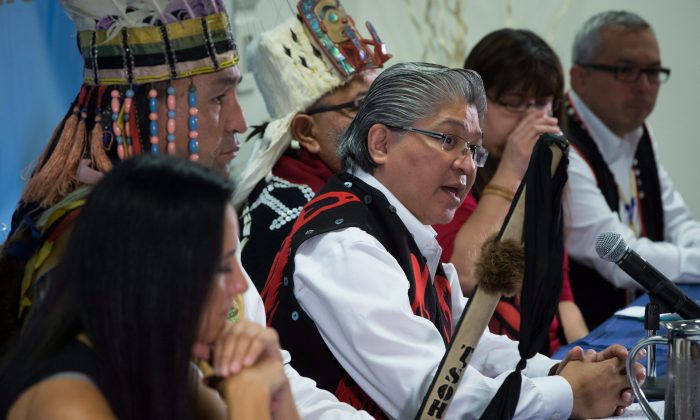 VANCOUVER—The government is asking the Federal Court of Appeal to uphold its controversial decision to approve the Northern Gateway pipeline project.

First Nations, environmental groups, and a union are asking the court to quash the decision because of an alleged failure to consider environmental threats or consult with aboriginal bands.

The government approved the $7-billion proposal from Enbridge in June 2014 with 209 conditions, including the creation of plans to protect caribou habitats and marine mammals.

A lawyer for the government says a federal review panel concluded the conditions would mitigate nearly all the ecological risks associated with the plan to link Alberta’s oilsands with British Columbia’s north coast.

Jan Brongers says the Joint Review Panel found that threats to grizzly bears and caribou were justified given the pipeline’s expected long-term economic benefits to Canada. He says the panel heard oral and written evidence from First Nations and determined the project would not have significant adverse effects on traditional use of their lands.

Harper said Conservatives are examining Quebec’s Bill 94, which requires Muslim women or others who wear face coverings to remove them if they want to work in the public sector—or do business with government officials.

Harper told CBC’s Power and Politics on Tuesday that, if re-elected, the Conservatives would look at their own federal ban. He made similar comments last week in the French-language debate hosted by network TVA.

Both Liberal Leader Justin Trudeau and NDP Leader Tom Mulcair condemned the proposal as an attempt to distract voters from serious questions about Conservative management of the economy.

Harper’s proposed ban on niqabs in the civil service would affect an infinitesimally small number of bureaucrats. Statistics from 2011 show only 1.8 percent of 257,000 federal employees are Muslim women, and only a small subset of them is likely to wear face coverings.

SAINT JOHN, N.B.—A forensic identification officer with the Saint John police department says some of the 40 blows to the head of Richard Oland were caused by a hammer-type instrument while others were inflicted with a blade-like weapon.

In the second-degree murder trial of Oland’s son, Dennis Oland, in New Brunswick’s Court of Queen’s Bench on Oct. 7, Sgt. Mark Smith said the blade-like weapon left wounds that were six- to seven-centimetres long. He said it was one of the bloodiest crime scenes he had ever seen.

Many of defence lawyer Gary Miller’s questions focused on Smith’s examination of Dennis Oland’s silver Volkswagen Golf and a red reusable grocery bag in the trunk. Smith said the car was searched for almost 16 hours and a number of different tests were conducted but there were no positive tests confirming any blood.

Oland has pleaded not guilty to the charge.

But Mayor Denis Coderre has said federal officials have known about the plan since September 2014, and he gave Environment Canada until the end of the week to meet with him and city officials.

Aglukkaq tweeted Wednesday, Oct. 7, that her office learned last week of the wastewater dump plan, which has become fodder in the federal election campaign and the subject of intense debate in the Quebec legislature.

Prime Minister Stephen Harper weighed in during a Saskatoon campaign stop Wednesday, urging the city to find an alternative plan. On Tuesday, the federal government urged the city to suspend the planned dump, prompting Coderre to accuse Ottawa of playing “cheap” politics.

Quebec Premier Philippe Couillard supports Coderre’s plan—a one-week sewage dump set to begin Oct. 18 which is aimed at relocating a snow chute that runs under a major downtown expressway that is being razed.

REGINA—Nearly nine out of every 10 people who responded to a Saskatchewan government survey say they don’t want the province’s farmland to end up in foreign hands.

Eighty-seven percent of the more than 3,200 people who responded to a farmland ownership consultation say they don’t support foreign ownership of Saskatchewan farmland. Seventy-five percent also say they’re opposed to allowing investors such as Canadian pension funds to purchase farmland in Saskatchewan.

The issue of who can own farmland in Saskatchewan has prompted a spirited debate that was sparked after the Canada Pension Plan Investment Board started buying up farms in 2013.

The rules currently don’t allow institutional investors to own Saskatchewan farmland and limit foreign ownership to four hectares, but the investment board’s structure made it eligible.

Farmers have raised concerns about loopholes they say allow a variety of investors to drive up rents and farmland prices in the province.

In their submission to the consultations, the National Farmers Union said that under today’s laws, Canadian-owned investment companies are legally buying up farmland, a trend it says has turned Saskatchewan landowners into tenant farmers.