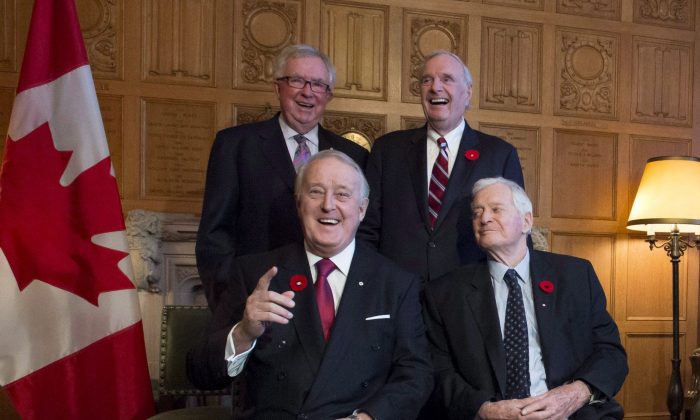 Former prime ministers Brian Mulroney (front L) and John Turner, with Joe Clark (rear L) and Paul Martin as they mark the 150th anniversary of the first meeting of the first Parliament of Canada, in Ottawa on Nov. 6, 2017. (The Canadian Press/Justin Tang)
Canada

Federal politicians and former prime ministers of all partisan stripes gathered in the House of Commons on Nov. 6 to mark the 150th anniversary of Canada’s first Parliament.

Former prime ministers John Turner, Joe Clark, Brian Mulroney, and Paul Martin were among those who watched and listened from the Commons visitor’s gallery as tributes were read into the official record, with speeches from Prime Minister Justin Trudeau, Conservative Leader Andrew Scheer, and Green party Leader Elizabeth May.

Earlier in the day, the four men sat together and shared a few memories with House Speaker Geoff Regan and former Commons speakers as they celebrated the moment.

The recent sex-assault controversy involving the founder of the Just For Laughs festival has prompted the creation of a new comedy bash.

Several dozen mainly francophone Quebec comedians have joined forces to put together an alternative festival, expected to be launched in 2018.

Organizers admit it’s being created as “a direct response to the scandal that recently shook Quebec.”

Just For Laughs founder Gilbert Rozon recently stepped down as president of the organization following allegations from at least nine women he either sexually harassed or sexually assaulted them.

The federal Immigration Department conducts a public poll every year prior to putting together its annual immigration plan.

This year’s survey, which collected input from 2,503 people, shows a modest increase in the number who think the country is letting in too many immigrants. The survey also showed a slight decline in the number of people who believe they, their province, or the country benefits from immigration.

Edmonton couple says adoption nixed over their views on sexuality

A Christian couple from Edmonton is accusing Alberta of discrimination, claiming their application to adopt a child was rejected over their religious views on gay marriage and homosexuality.

The married couple say they submitted their application last year and passed a required course for potential adoptive parents. But during a follow-up by officials this year, they ran into trouble when they answered questions about sexuality, according to an affidavit filed in support of an application for a judicial review of the government’s decision.

The couple, who aren’t named, say they accept that same-sex marriage is a legal reality, but they don’t support it and believe that homosexuality is wrong.

Angelina Jolie to give keynote address at Vancouver peacekeeping summit

Academy Award-winning actress Angelina Jolie is expected to lend her star power to next week’s peacekeeping summit in Vancouver.

A draft program for the two-day meeting leaked to The Canadian Press says Jolie will deliver a keynote address at the event, appearing as a special envoy of the UN High Commissioner for Refugees and co-founder of the Preventing Sexual Violence Initiative.

The other keynote address will be delivered by Patrick Shanahan, the U.S. deputy secretary of defence.

Representatives from 80 countries are expected to attend the summit, which kicks off Nov. 14.