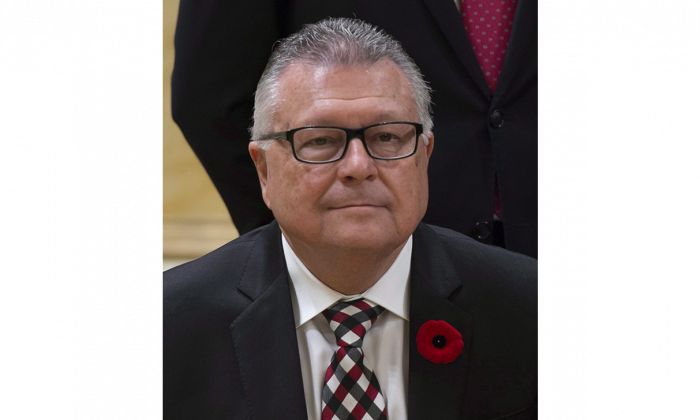 Minister of Public Safety and Emergency Preparedness Ralph Goodale in Ottawa after being sworn in on Nov. 4, 2015. (The Canadian Press/Justin Tang)
Canada

OTTAWA—Public Safety Minister Ralph Goodale says there’s no reason to raise Canada’s threat level, even in the wake of the deadly attacks in Paris last week.

The minister says authorities are being extra vigilant and everything possible is being done to keep Canadians safe. He urges people to be alert, but says the country is basically safe and peaceful.

RCMP Commissioner Bob Paulson says his force is working with other security forces around the world in monitoring threats.

Goodale says now is not the time for what he called “vigilante retaliation,” an apparent reference to a fire attack on an Ontario mosque and an assault against a veiled woman in Toronto. Instead, he says, it’s a time for Canadians to stand together.

MANILA, Philippines—The new Liberal trade minister says the $4.3 billion compensation package the previous Conservative government made to dairy farmers to counter any ill effects of the Trans-Pacific Partnership is not a done deal.

International Trade Minister Chrystia Freeland said that package is under review, as part of the Liberal government’s promise to consult with Canadians on the massive 12-country Pacific Rim trade pact and put it to a vote in Parliament.

For now, she said her government is not bound by the compensation commitment made by the Conservatives during the federal election campaign.

Freeland’s assessment came in Manila on Nov. 18 at the same Asia-Pacific Economic Co-operation leaders’ summit where U.S. President Barack Obama made an impassioned pitch to the leaders of the 12 TPP countries—including Prime Minister Justin Trudeau—to ratify the deal as quickly as possible.

Freeland’s comments are not likely to be well received by Canada’s dairy industry, which fought hard to protect its supply management system.

OTTAWA—An eight-year investigation into allegations of price fixing in the chocolate candy business has concluded after charges against Nestle Canada and a former executive were stayed.

The Public Prosecution Service of Canada entered a stay of proceedings Nov. 17 against the company and former president Robert Leonidas, who were accused of conspiring to fix chocolate prices between 2002 and 2008. No reason was given for the Crown’s decision.

Hershey Canada, the only company convicted in the case, pleaded guilty in June 2013 to price-fixing and was fined $4 million.

Hershey had co-operated in the Competition Bureau’s investigation and the regulator recommended the company receive lenient treatment in return.

That was the burning question asked on the front page of a Manila newspaper Nov. 18 as the first day of the Asia-Pacific Economic Co-operation leaders’ summit opened.

A pair of large photos of the two leaders filled the top half of the Philippine Daily Inquirer broadsheet. The caption said: “Ladies choice Are you with Team Nieto or Team Trudeau?” The newspaper said that the two leaders have been described in reports as “Apec hotties.”

An accompanying story that described the arrival of the 21 APEC leaders on Tuesday said employees and staff of the country’s Bureau of Immigration and members of local media tried to get selfies with the prime minister after he landed.

“Aware of Trudeau’s popularity, a member of the Malacanang media office earlier reminded journalists covering his arrival against shouting or making giddy shrieks,” the newspaper said.

OTTAWA—Opposition Leader Rona Ambrose has chosen a veteran Quebec MP to serve as deputy leader of the Conservative caucus.

Denis Lebel had been among the candidates vying for the post of interim leader last month, but lost out to Ambrose for the top spot. He’s largely considered responsible for the party’s better-than-expected showing in that province in the October election; there are now 12 Conservative MPs from Quebec.

Ambrose also announced that former Speaker Andrew Scheer will serve as the party’s House leader. Scheer, who represents a Saskatchewan riding, says he’s experienced life on the opposition benches and is used to some of the work that entails, and that he will also bring his experience as Speaker to his new job.

CALGARY—It’s been a tough week for workers at Canada’s two biggest pipeline companies, with TransCanada the latest to hand out layoff notices.

TransCanada spokesman Mark Cooper confirmed the cuts but declined to say how many jobs are being lost or what parts of the business are bearing the brunt. He says the cuts aren’t related to any specific project or decision, but are rather meant to ensure the company stays competitive amid tough market conditions.

Earlier this week, fellow pipeline firm Enbridge announced it would be shedding 500 jobs and leaving 100 more vacant positions unfilled. The Enbridge cuts represent about five percent of its workforce in the United States and Canada.