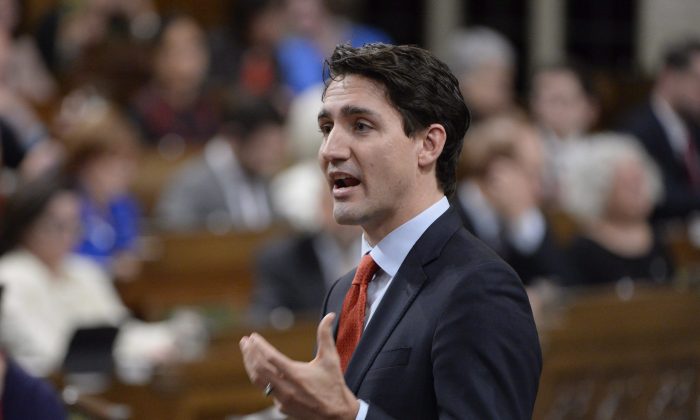 Prime Minister Justin Trudeau during question period in the House of Commons on Dec.7, 2016. (The Canadian Press/Adrian Wyld)
Canada

TORONTO—The federal government is setting aside $218 million over five years on a government agency intended to lure investment.

During a speech before the Toronto Region Board of Trade, International Trade Minister Chrystia Freeland said the money will go to the Invest in Canada Hub, which was announced last month during the fiscal update.

Freeland said the agency will be operational next year and act as a one-stop shop for investors in an effort to boost employment and economic growth.

She said Canada may be the only industrialized nation in the West to be bucking the trend towards protectionism by continuing to stand up for an open society that welcomes immigrants and is open to trade.

The federal Liberals have promised the law in the spring, but Pallister says he and some other premiers have concerns that there are still many details to work out.

Pallister says issues such as the minimum age for users, maximum strength of the pot, and proper distribution are still up in the air.

He also says there needs to be a large public awareness campaign about the dangers of driving while high, and that he wants the provinces to have a common set of rules on marijuana.

VANCOUVER—Alberta Premier Rachel Notley says chants of “Lock her up” at a rally protesting her plans for a carbon tax reflect the views of extreme groups of people who have migrated to both conservative parties in the province.

Notley says that should be concerning to the Wildrose and Progressive Conservative parties because people who are democratically elected shouldn’t be confronted with threats of being jailed.

Speaking in B.C. on Dec. 6, Notley said she knows with “complete conviction” that such views don’t reflect the vast majority of Albertans or Canadians and are not a sign of Trump-style politics coming to Canada.

The “Lock her up” refrain was often heard at U.S. president-elect Donald Trump’s campaign rallies when he accused Hillary Clinton of destroying email evidence in a congressional investigation.

Speaking during a special assembly of First Nations leaders on Dec. 6, Trudeau said Canada’s first First Nations school board agreement in Manitoba is expected to be signed later this month.

He said Canadians are working in unison to correct historical wrongs and to deal with the intergenerational trauma of indigenous people.

Chiefs from across Canada gathered this week for three days of meetings to discuss a range of issues, including resource development, aboriginal suicide, and missing and murdered indigenous women.

ST. JOHN’S, N.L.—A fisheries union and environmental group are releasing a plan to work together to conserve fish stocks off Newfoundland and Labrador.

WWF-Canada and Fish, Food and Allied Workers say their plan is meant to rebuild northern cod in the province.
It’s hoped that the Fishery Improvement Project will make sure the once-depleted stock remains sustainable once it reaches a level that can support a commercial fishery.

The groups say a rebuilding plan would include timelines, harvest-control rules, and an estimate of the recreational cod-fishery catch. It would also involve regular monitoring of how the fishery affects the ecosystem, such as the bycatch of endangered species.

The plan will be implemented over the next five years.