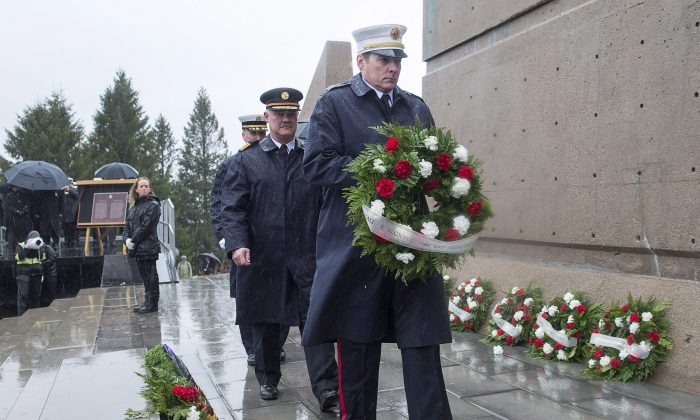 Halifax firefighters lay a wreath at a ceremony to mark the 100th anniversary of the Halifax Explosion at Fort Needham Memorial Park in Halifax on Dec. 6, 2017. Two ships, the SS Imo and the SS Mont Blanc, collided in the harbour and the resulting explosion remains the worst human-made disaster in Canadian history. (The Canadian Press/Andrew Vaughan)
Canada

Poets and politicians remembered those who died and those who struggled to rebuild a shattered city as a sombre ceremony was held Dec. 6 to mark 100 years since the Halifax Explosion.

The wartime blast resulted from a collision of two ships in the harbour that led to approximately 2,000 deaths and an estimated 9,000 wounded.

A large crowd turned out in cold rain at the Fort Needham memorial site, not far from where the French ship SS Mont-Blanc erupted and wiped out the city’s north end and a Mi’kmaq village across the harbour on Dec. 6, 1717.

The catastrophe remains the worst human-made disaster in Canadian history.

Quebec Premier Philippe Couillard bemoaned the dearth of qualified labour in the province Dec. 5, saying the problem is more glaring than any dangers posed by possible changes to trade deals.

Speaking in Quebec City at a forum on diversity and discrimination, Couillard estimated more than 1.3 million jobs will need to be filled in Quebec by 2024.

Quebec government statistics indicate the province’s active population has been diminishing by 5,000 workers a year since 2014. That translates into companies being forced to scale back on investments and turning down contracts.

Couillard said many Quebec businesses are crying out for workers.

Indigenous Services Minister Jane Philpott says the next federal budget will include more money for First Nations child welfare services on reserves, but she won’t say how much.

Speaking at a special chiefs meeting convened by the Assembly of First Nations on Dec. 6, Philpott said the Liberal government is keen to fix the “funding gap” in the resources available to Indigenous children as compared to non-Indigenous kids.

She said she plans to discuss funding levels with Finance Minister Bill Morneau prior to the release of the next budget in 2018.