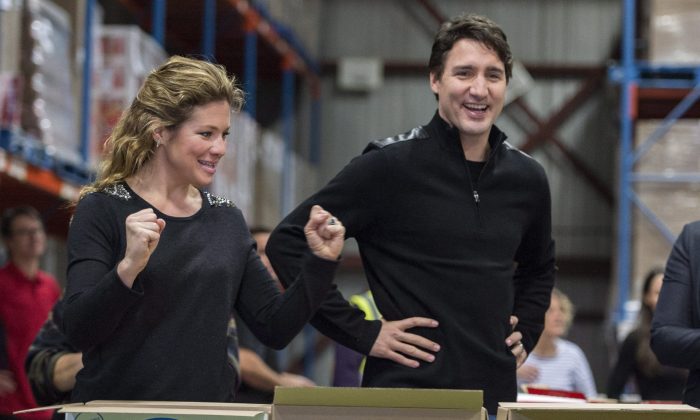 Prime Minister Justin Trudeau and his wife Sophie smile after preparing their 100th Christmas basket at the Moisson Montreal food bank on Dec. 18, 2015, in Montreal. Trudeau has been selected Canada's Newsmaker of the Year in The Canadian Press's annual survey of newsrooms. (The Canadian Press/Paul Chiasson)
Canada

Trudeau picked as Canada’s Newsmaker of the Year

OTTAWA—It’s been quite the year for Prime Minister Justin Trudeau.

He scored a stunning come-from-behind election victory; became both the first offspring of a prime minister to ascend to the top job himself and the first federal leader to vault his party straight from a distant third place into office; circled the globe; and created an international sensation.

And now he’s been selected as Canada’s Newsmaker of the Year in The Canadian Press’s annual survey of newsrooms across the country.

Unlike the hard-fought Oct. 19 election, it wasn’t much of a contest. Fully 87 percent chose Trudeau as the top newsmaker in the survey.

Rachel Notley, the NDP leader who put an end to the four-decade Conservative dynasty in Alberta, came a distant second, chosen as top newsmaker by just seven percent of those surveyed.

Little Alan Kurdi, the toddler whose lifeless body on a Turkish beach put a human face on the Syrian refugee crisis and pushed the issue smack into the midst of the federal election campaign, was one vote behind Notley.

VANCOUVER— Jose Figueroa, an asylum seeker from El Salvador who spent two years in sanctuary inside a British Columbia church has been handed freedom by the federal government.

Figueroa has been granted an exemption to remain in Canada by Immigration Minister John McCallum as a permanent resident on humanitarian and compassionate grounds.

The 48-year-old sought refuge at a church in Langley, B.C., in October 2013 after a warrant was issued for his arrest despite protests from supporters across the country.

Figueroa, who has lived in B.C. for 18 years, says he and his wife and three children are overjoyed—and he believes his change in status can be largely credited to the new Liberal government.

In 2010, Immigration and Refugee Board officials declared Figueroa inadmissible as a refugee claimant pointing to his admitted membership in a revolutionary group called FMLN during a civil war in the 1980s.

Figueroa says he was helping his countrymen who were being murdered by death squads, and that same revolutionary group is now the political party that forms El Salvador’s democratically elected government.

North Korea says Canada and Prime Minister Justin Trudeau are “recklessly spouting rubbish” by protesting the sentencing of a Canadian pastor to life in prison with hard labour for what Pyongyang calls “crimes against the state.”

A statement shared by North Korea’s mission to the United Nations on Dec. 22 says Canada’s government is “obliged to make an apology” for the crimes it says Hyeon Soo Lim committed.

Lim was sentenced last week after being accused of trying to use religion to destroy the North Korean system. Trudeau’s comments followed.

Lim’s relatives have said the pastor, who is in his 60s, travelled in January on a regular humanitarian mission to North Korea. He had previously visited the country numerous times for the same reason.

A spokeswoman for Canada’s Global Affairs Department has said Canada is “dismayed at the unduly harsh sentence.”

Work has begun for appeal in Oland conviction, says lawyer

SAINT JOHN, N.B.—A lawyer involved in the case of Dennis Oland says a legal team has started to prepare an appeal of his conviction in the death of his father.

William Teed, who represents Oland’s mother Connie, says in an email that work is being done “to commence an appeal in the very near future.”

The statement comes after a jury found Oland guilty Saturday of second-degree murder in the death of prominent New Brunswick businessman Richard Oland, whose body was found face down in a pool of blood in his Saint John office on July 7, 2011.

Dennis Oland sobbed uncontrollably as the jury read out the verdict in a Saint John courtroom. Family members cried and hugged each other, with many appearing to be stunned by the verdict—which has also surprised legal experts.

The trial heard from nearly 50 witnesses and revealed a case built on what Justice John Walsh called largely circumstantial evidence. Richard Oland had suffered 45 blunt and sharp force blows to his head, neck, and hands, but no weapon was ever found.

SASKATOON—A woolly mammoth tusk believed to be between 12,000 and 15,000 years old has been discovered at a gravel pit east of Saskatoon.

Tim Tokaryk of the Royal Saskatchewan Museum says the fossil was found by Inland Aggregates at their work site last fall.

Tokaryk says the tusk will help expand knowledge of where woolly mammoths once roamed. He also says it’s rare to make such finds in work areas.

He says it’s a good thing the company contacted the museum promptly, because an ivory fossil can break down quickly once it’s unearthed.

“Conservation of ivory from fossil animals is extremely delicate. Once the tusk becomes exposed to air, it begins to dry out, expand and crack,” Tokaryk said in a release.

Mammoth remains tell of an environment in Saskatchewan of tundra at the edges of ice fields during the glacial period. Almost all of the Royal Saskatchewan Museum’s collection of mammoth remains are isolated bones and teeth, except for the partial skeleton of one animal found near Kyle.