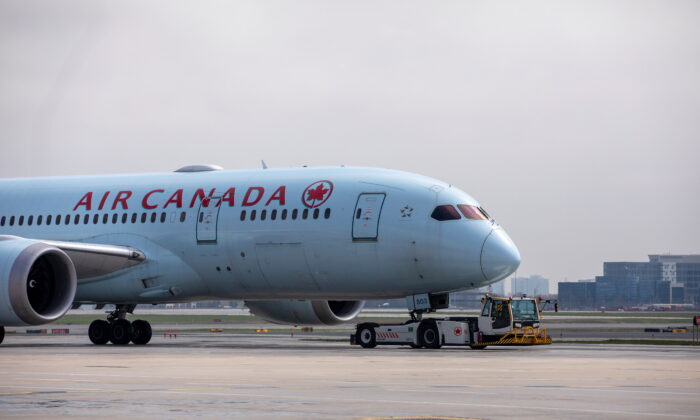 An Air Canada airplane is towed along a runway at Toronto Pearson Airport in Mississauga, Ontario, Canada, on April 28, 2021. (Carlos Osorio/Reuters)
Canada

Ottawa Firm on Masks After Mandate Dropped for Travel in US

“We continue to evaluate and reevaluate based on the science, based on shifting numbers. But when we have announcements to make, we will make them but they will always be grounded in science,” Trudeau said on April 19 while making a funding announcement in New Brunswick.

“I can tell you that our government and Transport Canada‘s priority is the health and safety of passengers and the workers in the aviation sector.”

Trudeau said Canadians must balance getting back to the “things they love” with staying safe from another wave of the virus.

“And the best way to do that is to lean in on what science is telling us, what the experts are telling us, and make sure that we’re moving forward in the right way,” he said.

On April 18, a U.S. federal judge struck down the mask mandate for planes, trains and other mass public transit systems that had been imposed by the Centers for Disease Control and Prevention (CDC).

District Judge Kathryn Kimball Mizelle said the CDC rule violated administrative law by not giving proper notice before imposing the mandate in February 2021, and exceeded its statutory authority by regulating travellers within the United States.

Transport Minister Omar Alghabra would not comment on the ruling while making an announcement on April 18 in Calgary, but he said the mask mandate will remain in place as the government continues to assess the situation.

Alghabra said the government’s decision is “based on the advice that we receive from our experts and doctors and based on data, it is proven that masks prevent or reduce the transmission of COVID the virus.”

“Having said that, these measures are—as we said, we’re always assessing them based on the developing and the evolving science. For now, there is no change in our regulation.”

The Biden Administration has not yet indicated if it will appeal the decision, citing the need for the CDC to weigh in beforehand.

“The Department of Justice and the Centers for Disease Control and Prevention (CDC) disagree with the district court’s decision and will appeal, subject to CDC’s conclusion that the order remains necessary for public health,” said an April 19 Justice Department statement.

Many public health restrictions have been lifted by Canadian provinces and territories in recent months, but Ottawa has not repealed any measures within its purview, such as the vaccine mandate for air and rail travel, and for federally regulated workplaces.