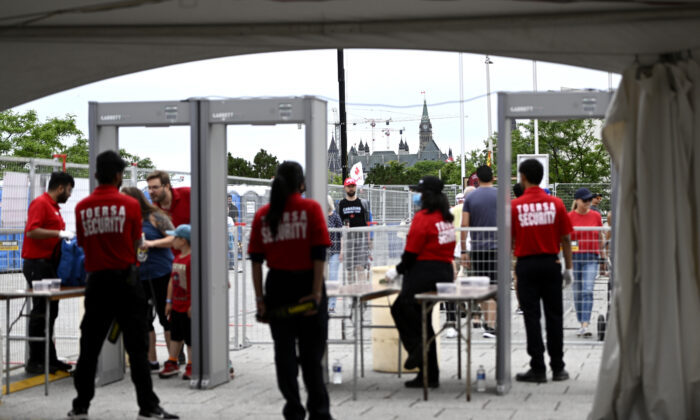 Parliament Hill is seen beyond a security screening area for people arriving for Canada Day celebrations at Lebreton Flats in Ottawa on July 1, 2022. (The Canadian Press/Justin Tang)
Viewpoints

Canada’s descent into authoritarianism was illustrated July 1 when we saw citizens being herded through metal detectors and having their bags searched under a heavy security presence as they tried to celebrate Canada Day in the nation’s capital.

Police issued warnings and followed through as hundreds of vehicles were ticketed and dozens towed for being too close to Parliament Hill. The celebrations, most of which were held in LeBreton Flats Park this year, had a low turnout and were described as subdued. It’s hard to celebrate a nation’s creation when you are treated as a potential criminal and could be ticketed for using sidewalk chalk or causing any “unusual noise.”

While the COVID-19 pandemic is fading, the government appears to be addicted to its newly gained authority and is continuing its work to erode fundamental pillars of democracy and individual liberties. The state has learned just how easily Canadians will hand over their freedoms under the guise of protecting the public good.

The Trudeau government already had a poor track record of respecting the rule of law and judicial independence after the SNC-Lavalin scandal unfolded in 2019. There was never a sense that Prime Minister Justin Trudeau felt anything had been done wrong—even after conflict of interest and ethics commissioner Mario Dion concluded that he had contravened the Conflict of Interest Act when he tried to pressure then-justice minister and attorney general Jody Wilson-Raybould in an active case. Perhaps Trudeau was right, considering he never faced anything more serious than a judicial finger-wagging for his actions. The prime minister feels above the law and for now, maybe he is.

Perhaps Trudeau was feeling emboldened from the lack of consequences for his past actions when he allegedly tried to influence, through the RCMP commissioner, the active investigation into the Nova Scotia mass shooting in the spring of 2020.

He sees institutions such as the judiciary and RCMP as subservient to his office rather than independent of it. It doesn’t help when the prime minister personally appoints the head of the RCMP and the attorney general. Canada’s power structure is laid out in a way that makes it nearly impossible to hold a prime minister accountable for his or her actions while in office.

The House of Commons is supposed to act as one check upon the authority of the prime minister’s office. In a majority government it rarely is, though. All the same, the House is the place where the government is questioned and held to public account for its actions by members of the opposition. The pandemic has provided the government with the means to greatly de-fang the House through “hybrid” sittings. Members haven’t had to appear in person for sessions since the pandemic began in 2020. They could virtually attend and vote through an app. The government learned to enjoy this lack of effective albeit often raucous questioning they used to have to endure in attending Parliament in person, and have quietly extended the hybrid status of the House into 2023 with nary a peep from the public or legacy media.

The legislative agenda this year reflected a government that has embraced authoritarianism as its core ideology. Nearly every major government bill tabled in the House and the Senate had the purpose of further empowering the government over its citizens.

Bills C-18 and C-11 are both modelled to control information and expression. Bill C-18 would impose strict regulations on internet platforms such as Google and Facebook, requiring them to pay “eligible news businesses” for content. A government committee would determine which news businesses are eligible, of course, while small outlets could be left by the wayside. Bill C-11 would empower the CRTC to regulate streaming content from Netflix to independent podcasters. Both bills appear to be solutions seeking a problem. The government sees unfettered media and speech as a problem.

Bill S-7 was designed to give customs authorities the ability to compel access to the personal digital devices of citizens on grounds of “reasonable, general concern.” It appears that the Senate may stop the bill, but it has to be asked why this bill was proposed in the first place. Why does the government have such a pressing need to access the personal information of citizens?

Bill C-21 proposes a freeze on all handgun sales in Canada and imposes stringent new regulations on long guns. Canada isn’t immune from firearm crime but it is well established that legal firearm owners have little to do with it. Regardless, the government is adamant about cracking down on law-abiding firearm owners.

The invocation of the Emergencies Act in Ottawa in February was the government’s most egregious attack upon civil liberties. While the blockades were disruptive and needed addressing, it is becoming evident that the imposition of the Emergencies Act was a gross overreaction as the government’s rationale for invoking the act crumbles under committee scrutiny.

Accountability, democracy, civil liberties, and transparency appear to be annoying afterthoughts to Canada’s Liberal government. They are all hindrances that need to be skirted and bypassed when possible. When the government is found to have gone too far, they are unapologetic. Indeed, they tend to react with legislation designed to further empower the state over citizens.

The current government is ideologically obsessed with top-down control. Citizens are to be led and controlled, ostensibly for their own good rather than listened to.

Worst of all, most of Canada’s citizens appear to be OK with this right now. Our docile nature only emboldens this government.

The images of children being patted down while dejected-looking lines of people make their way through security into an Ottawa park for a subdued celebration of Canada should serve as a wake-up call. Parliament Hill is supposed to be the place of the people, and citizens couldn’t even use it to celebrate Canada Day this year.

The Hill is now the place of the government, and the people come second.