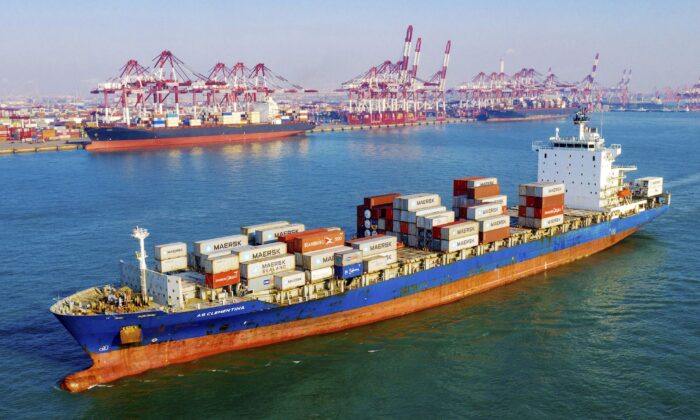 A container vessel moves past the port in Qingdao in eastern China's Shandong Province on Jan. 14, 2020. (Chinatopix Via AP)
Canada

Canada should halt all trade with China until Beijing abides by international norms and the rule of law, says Liberal MP John McKay, the chair of the House of Commons public safety and national security committee.

The Toronto-area MP’s comments come after the recent establishment of a special all-party committee to re-evaluate all aspects of Canada-China relations.

The committee was formed on Dec. 10, 2019, exactly one year after China detained Canadians Michael Kovrig and Michael Spavor in apparent retaliation for Canada’s arrest of Huawei CFO Meng Wanzhou in early December 2018 at the behest of the United States.

“When your starting point is kidnapping of Canadian citizens for absolutely no reason at all, you have to realize that there’s no basis for any arrangements: trade deals, contractual arrangements, diplomatic arrangements,” McKay said in an interview.

“Understandings are only going to last for as long as the Chinese government decides it lasts, and that’s the end of it.”

Doing business with the Chinese regime exposes Canada to vulnerabilities, as Beijing could cut off trade at any time and without warning, McKay says. He cites Canada’s canola farmers who were hit by a sudden Chinese embargo on imports in March 2019 to the tune of $2 billion.

Trade should be paused until China is “prepared to adhere to international norms of the rule of law and respect for human rights and citizens’ rights,” he says.

As for trade agreements with China, U.S. President Donald Trump and Chinese leader Xi Jinping recently signed a bilateral trade deal in which China will, over the next two years, purchase at least US$200 billion of American products and services more than it did in 2017. The agreement also includes a dispute resolution mechanism to ensure full enforceability.

McKay says such a scenario isn’t likely to occur between Canada and China, however.

“We are a middle power at best, and our leverage is not the same as the U.S. leverage,” he says. “Trump could have a deal one day, and he slaps sanctions or trade tariffs on the next, and he can do it because they are the United States and the biggest consumer in the world. And the Chinese need to have access to the American market, so they need to come to the table.”

As for Canada, McKay says that “they don’t need us, to be realistic about it. … Our leverage is quite modest, and so I don’t know that we should be pursuing any deal with China with any enthusiasm.”

China experts have termed Beijing’s aggressive foreign policy measures as “asymmetrical warfare.” McKay describes the regime’s use of this tactic as “unique.”

“It’s all things at all times in all places,” he says, citing two examples: a Canadian government scientist and her research team from China who were escorted from a lab in Winnipeg by RCMP in July 2019 and are under investigation; and the possibility of Chinese telecom giant Huawei’s participation in Canada’s 5G network.

“I’m sure [Huawei has] got very fine technology,” he adds, “but if in fact their ultimate masters are in Beijing, and if Beijing wants to know something about somebody or something, Huawei will be obliged to provide it.”