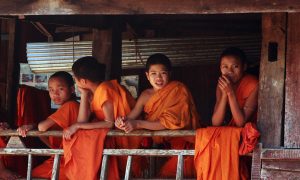 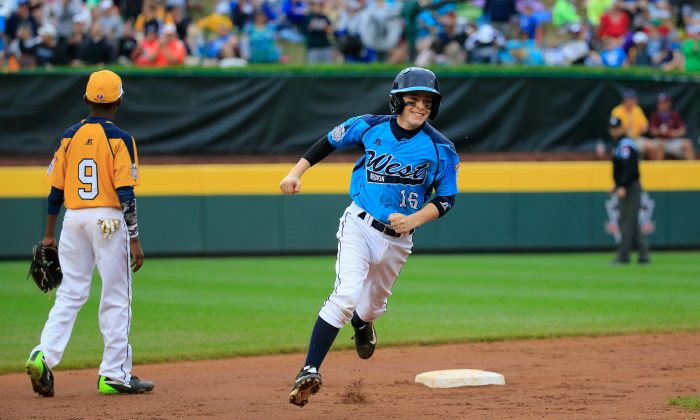 Brad Stone 16 of the West Team from Las Vegas rounds the bases after hitting a home run against the Great Lakes Team from Chicago during the United States Championship game of the Little League World Series in South Williamsport, Pa., on Aug. 23, 2014. (Rob Carr/Getty Images)
Opinion

Youth sports are viewed as a rite of passage in a child’s development. If the clichés that permeate sports broadcasts and locker room speeches are to be believed, sports participation teaches children the value of hard work, builds character, and develops future leaders.

While the validity of these claims are questionable, the fact remains that parents allow millions of children to participate in youth sports each year. At the very least, parents have partial faith in the idea that youth sports are good for their children.

Yet as a researcher and consultant who studies youth sports, I frequently speak with concerned parents. They’re worried that their child’s experience playing organized sports has diverged from their own.

Youth sports have become a big business in the United States, and have taken on a much more professionalized form over the past decade. In previous generations, children spent a large portion of their leisure time roving and playing throughout their neighborhoods. Today’s children, on average, are spending much less time in unstructured settings and much more time in environments—sport or otherwise—organized by adults.

In a study published earlier this fall in the Creativity Research Journal, some colleagues and I wrote an article that investigated the relationship between childhood leisure activities and creativity in young adults.

We hoped to explore the extent to which youth sport participation could influence creative development. In particular, we wanted to take a first step toward understanding whether participation in informal sports played in unstructured settings (for example, neighborhood or “pickup” sports) had a different impact on creativity than participation in traditional, organized youth sports.

In the study, we asked 100 undergraduate and graduate students to complete a very detailed “childhood leisure activities questionnaire,” which asked them to reflect on hours spent in various leisure activities during their school-age years. These ranged from creating art, to reading, to playing video games, along with participating in organized and informal sports. We also asked these same participants to complete the Abbreviated Torrance Test for Adults (ATTA), a widely used creativity test that required them to draw and write in four creative activities.

We then analyzed the relationship between the participants’ self-reported childhood leisure activities and their performance on the ATTA.

The study design contained a number of inherent limitations (for example, asking participants to remember and estimate hours spent per week participating in numerous leisure activities throughout their childhood). For this reason, we used a very conservative interpretation in our analysis of any relationships that emerged.

Perhaps even more interestingly, the difference between those participants whose scores placed them into “above-average” creativity bracket was only about two hours per week of unstructured sport participation throughout their school-age years.

What could account for such distal results? On a theoretical (and, frankly, intuitive) level, informal sports played in unstructured, unsupervised environments capture many of the elements that are linked with the developmental benefits of play for children. These environments offer children the freedom to self-govern, create rules, problem-solve, and resolve social conflicts on their own terms.

“The Land” is a documentary that tells the story of a play space in Wales where kids can freely roam, build structures using scraps, and experiment with fire. The film highlights the benefits of unstructured play.

Organized sports, on the other hand, tend to replicate hierarchical and militaristic models aimed at obedience, replication, adherence to authority, and a number of other qualities that, on a theoretical level, would be unlikely to be conducive to creative development.

When I’m out in the field researching or consulting, parents often ask, “How does this research impact how I should approach my child’s youth sports experience?”

I tend to respond by pointing out two key takeaways.

1. How We Play Sports Matters

As the youth sports experience (at least in the United States) becomes increasingly competitive and more intensely structured, children’s leisure time has been viewed as a zero-sum productivity enterprise. Children’s play, particularly in the form of pickup and neighborhood sports, has all but vanished in many communities.

What the results of our study indicate is that these unstructured settings that permit informal sports are not without merit. Rather, they may contribute to fostering positive outcomes like creativity. Under the right conditions, organized sports can do many beneficial things for a child’s development, but they cannot do everything (and, under the wrong conditions, they can be equally damaging). The long-term benefits of a less-structured environment may be harder for an adult to see, but they are well-established and validated over decades of research about children’s play.

Perhaps the single-most intriguing finding from our analysis was the fact that those individuals whose scores on the creativity assessment identified them as “above-average” were not children who eschewed organized sports in favor of the activities we traditionally associate with creativity (art, music, theater, etc.). Instead, the respondents with “above-average” creativity simply appeared to strike more balance between their time spent in organized and unstructured sport settings.

As someone who researches youth sports, I find this distinction to be particularly encouraging. It suggests, at least to me, that parents interested in fostering more creative development for their children don’t have to necessarily forgo traditional organized sports. They simply need to be aware of the importance of a balanced distribution of their children’s time between organized and unstructured settings.

Matthew Bowers is clinical assistant professor in sport management at the University of Texas at Austin and co-principal of Hook & Ladder Creative Sport Solutions. This article previously published on TheConversation.com.