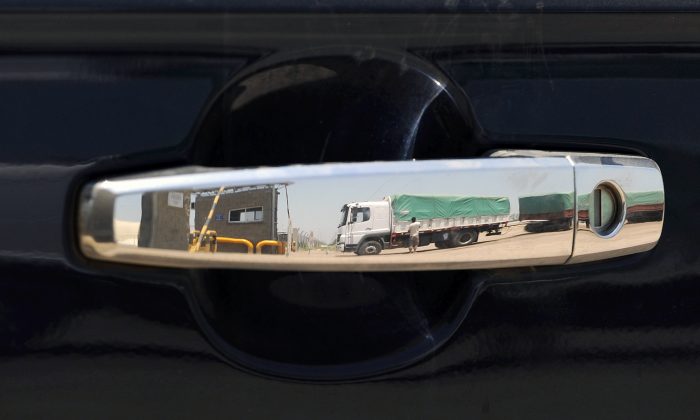 Can You Unlock a Car Door With a Mere Penny?

There have been rumors going around Facebook and elsewhere that thieves have been wedging coins—like a quarter or a penny—into car door handles to get inside the vehicle. The rumors claim that it affects the “central locking” of the vehicle.

RIP OFF ALERT: If You See A Coin Inserted In Your Car Door Handle READ THIS FIRST #RT https://t.co/rsv790tT1Y pic.twitter.com/xI9sBGwytK

Here’s one example of the rumor (and there’s been several recent articles about it that have gone viral on Facebook):

“Attention, new thing of thieves
While your car is locked, they slide a 5 cent coin in the door handle of the passenger.
When you leave, nothing happens but when you stop and close your car, the central locking will not function normally and the car will therefore remain open.
As soon as your departure, the thieves who have followed you will be able to penetrate in your car and steal everything that interests them.
You have to control your doors to each closure. (sic)”

But these rumors have been around for some time, and several experts say they have very little credibility.

According to Snopes, “We contacted Caliber Collision Repair in Lindenhurst, New York, to ask whether a maneuver like the one described in the warnings would effectively disable any vehicle’s locking mechanism. When we described the rumor, the employee laughed and explained that car door locks can’t really be disabled in that fashion. He said that on most current vehicle models there is no place in which to wedge a coin, and that even on models with inadvertent coin slots the key fob locking mechanism wouldn’t be disrupted by the depicted coin-wedging.”

On a forum for car mechanics a few days ago, one person noted that he’s “been unable to find a vehicle this works on,” referring to the coin trick.

“In principle of course, where it works, it will be because the central locking mistakenly thinks the door is ajar. It doesn’t work on every brand of car though. At least on my Toyota, and my wife’s Suzuki, the mechanism appears to be specifically designed to avoid such tampering,” the user wrote.

But he stipulated, “I have a strong suspicion this is a hoax.”

Another person on the forum agreed.

“I’ve checked with W203 2010 and the central lock works. Also with a friend’s KIA and Toyota. Central lock still works,” the person said.

Added another: “Doesn’t work on Kia Soul, either. I can even hold the door handle as far open as it will go without actually opening the door, and the door still locks with the remote.”

On the website ThatsNonsense, a writer tested the coin method.

“We tested it on a number of cars available to us that utilized central locking, and the ‘trick’ worked on none of them. As with most car door handles, you can leverage the handle towards the open position to a certain extent without actually opening the car door,” read the article.

“With all the cars we tested it on, the central locking worked fine unless the handle was opened all the way and the door physically opened. Inserting a coin was never sufficient enough to cause the door to actually be registered as open and thus it did not have any influence on the central locking.”