Can You Spot the Difference in These 27 Chinese Knockoffs?
0
Share Now
FacebookTweetParlerEmail
Copy Link 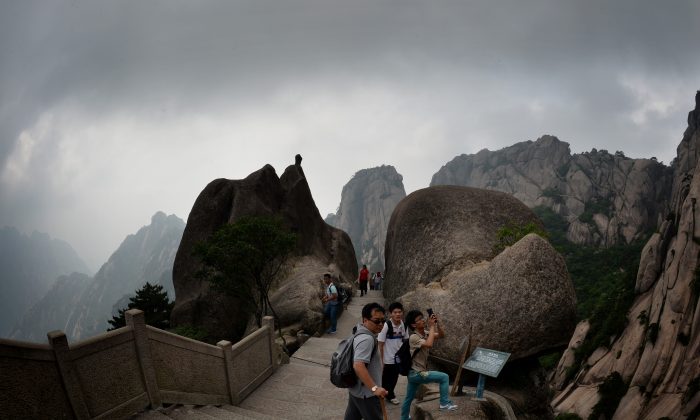 Chinese tourists hiking on Lotus Peak which is the most revered of the Huangshan (Yellow Mountains) peaks at the park in Anhui Province. The UNESCO World Heritage Site is one of China's major tourist destinations and has been a source of inspiration to Chinese painters, writers and poets for thousands of years. (Mark Ralston/AFP/Getty Images)
China Society

Can You Guess the Meaning of These 15 Chinese Slangs?

Slang carries the thoughts and feelings from the youth of any culture, so of course there will be great variance between cultures for behavior and what they deem important.

Below are Chinese words that are given very literal translations, partly to illustrate the relationship between the meanings of their characters, and their actual definitions.

This is an ancient wording, dating roughly 1,500 years back in use, to the Northern and Southern Dynasty period. It simply referred to a person, or family, of prominent background and great wealth. During the Cultural Revolution, it was used as a word to attack wealthy people. Now, it’s used on anyone who leads an extravagant and showy lifestyle.

When Apple released the iPhone 5s, a golden version was almost double the price of the other models. It was often called the “Land Wealthy Gold” (tǔháo jīn) iPhone, and many lavish gold objects would be sarcastically referred to as this type of gold.

Some women in China began to refuse marriage. Reasons range from waiting for true love, to urbanization of modern China and access to education and better job opportunities. Standards for marriage went up.

This phrase was even employed by the government, blaming these women for not marrying. The lack of brides-to-be was more-so an issue of the one-child policy and easy-to-obtain abortions in China. In America, an older definition we’d use is “Spinster.”

The two characters happen to have identical pronunciation (but much different writing) with the word “travel.”

This is quite a coincidence, since the English word it matches up with involves walking for a long distance, something that donkeys are good at, as well as carrying stuff upon one’s back, another place where donkeys do well. Especially when there is a friend with you.

A “donkey friend” in Chinese is “backpacker” in English.

Unfortunately, it’s not the kind of cuddly teddy bear type. A bear child in Chinese is the type who is raised with no discipline or boundaries, misbehaving at will.

The one-child policy has made for families of four grandparents and two parents looking after one child, and hoping to pour all their love and attention into that one child. And all that doting could spoil that child. We may say “a spoiled brat” in English.

In archaic definitions, this character meant an open window which light could shine through. This definition has all but been lost, when it regained popularity in the age of the internet and emojis, due to it’s similarity to a face. It’s used to show embarrassment, helplessness, shock, and any similar emotions.

In certain situations, it’s actually okay to say that oneself, or someone else, is a glass noodle. It doesn’t mean what it literally sounds like, that someone is frail or flimsy like a noodle made of glass. It’s more a coincidence in pronunciation when compared to English.

A common East Asian dish, glass noodles, or cellophane noodles, are made of mung bean starch, potato starch, or several other starches. It just happens that the pronunciation of glass noodle in Chinese is somewhat similar to the word “fans,” and is thus given to an adoring fan of a singer, actor, athlete, or so on.

Though its original meaning is that a child has grown mature, the internet meaning took it in a different direction. When a reporter in southern China was interviewing people on the street about a celebrity scandal, one of the men answered, “What does this have to do with me? I’m out buying soy sauce.”

The phrase then became a catch all phrase to express “I’m not involved with whatever is going on.”

The overly literal translation above is given only to illustrate the silliness of the actual meaning of the characters. The individual characters in the word don’t carry their literal definition, and instead are characters that sound similar to a Japanese word.

This word, which first became popular and common with internet forums, means in English “to troll.” Trolling is a form of provoking emotional responses from other internet users by making absurd or offensive comments.

This Chinese form also includes complaint and needless nit-picking, publicly pointing out others shortcomings. It later became a word that entered spoken language too. Another word, specific to the internet, is “Keyboard Hero.”

The meaning of this word is much similar. It comes from animals at feeding troughs. When the animals are already eating at one trough, and some new food is added to a second trough, some animals will scramble and struggle for the newly poured food.

When people do that, in Chinese, they instead are referring to a new job. In English, it’s called “job hopping.”

What once was a vulgar term is now a word of praise. The word first appeared during the Qing Dynasty, which ended in 1912. In modern times, the second character was replaced with an English letter, thus removing the crass origin of the word, except for those in-the-know.

Consequently, the abbreviation of the pinyin used in this word is NB. Pinyin is, the standard romanization system of language used in mainland Chinese. The popularity of this word, and with this abbreviation, may account for New Balance’s popularity in China.

Often times the word above for “cattle” is used to express someone who is strong or impressive. The word in its current definition means “powerful” or “awesome.”

Imagine two people at a high-class restaurant. The husband is wearing his suit, and the wife is wearing a beautiful evening gown. They sit at their small table, the waiter pours a glass of wine, they clink their glasses in a toast to one-another’s love, looking deeply into each other’s eyes—all with an extremely bright lamp shining down onto them overhead.

When two people are together in an intimate situation, but there is something, or someone else there that prevents any romantic emotions, the Chinese refer to this as a “light bulb.” In the United States, we call this a “third wheel.”

Compared to adolescents and teenagers of the United States, Chinese youth have a much lower rate of finding relationships. This is not for want, but for traditional culture which promoted respect and restraint between the sexes, especially during the teenage years.

Positive remnants of this self-moderation still exist in Chinese society, but with both modern and social media facing youth, the pursuit of relationships, as opposed to studies or extra-curricular activities, is becoming more common among Chinese youth.

Chinese dating, being wholly different when compared to the norms of the West, make for a higher frequency of single high school students, college students, and even young working individuals. This, along with Chinese modesty, created this self-abasing title, “single dog.”

For those couples who are more unrestrained, and have little concern for a “light bulb” as described above, the couple may be willing to display affection in front of someone else. If it happens that the person around the couple is a “single dog,” that person may feel sadness or jealousy about not being in a relationship.

A modern Chinese youth may now think “stop abusing the dog,” where as an American would more likely think, or even say “get a room” to such a couple.

Along the same line as the two above, this is for those couples who like to hug and kiss out in public areas. Others, upon seeing the couple behave that way, may say that the couple is “spreading dog food.” That is to say, the couple is taunting all of the “single dogs” that can see them.

In America, this would be instead called a “public display of affection.”

One of the newest phrases in Chinese slang, and more surprisingly, a new character. New phrases are very often made in China, especially with smartphones and internet connections being common-place. However, it’s  very rare that a new character is created.

Many Chinese characters are combinations of already existing characters. One of the most common examples is the word for “good,” which is a combination of the words for “female” and “son.” One interpretations is that it’s good to have both a daughter and a son.

This new word, which also has a pronunciation that does not already exist in standard Mandarin, means exactly what the title implies. It refers to an individual who is poor, ugly, and has no background. What may be most surprising to western learners of Chinese is that this word is almost strictly used to refer to oneself.

Most Chinese will not openly praise themselves. Due to Chinese modesty, it’s more common to be modest or even politely debase oneself in front of others, so as not to stir competition or jealousy from others.

This new character, which can not even be typed on a computer or smartphone, may stem from rationalizing why one can not find a partner. For example, common requirements in China for finding a wife, from the groom’s side, include having a house, a car, and a nice income. Due to years of China’s one child policy and a general preference towards sons, there are significantly fewer Chinese bachelorettes compared to bachelors.