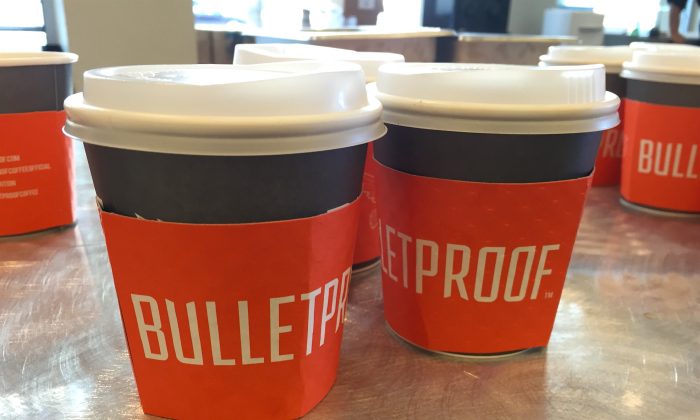 Can You ‘Biohack’ Your Way to a Healthier Lifestyle?

PASADENA, Calif.—Crowds of butter coffee-lovers filled the Pasadena Convention Center at the fourth annual Bulletproof Biohacking Conference over the weekend, trying out new technology and supplements in search of more energy and better health.

“Bulletproof” is named as such because Mr. Asprey says it’s how his coffee and other products make you feel.

Asprey is also a “biohack” enthusiast who plans to live to 180 years old.

“The main idea of biohacking is to change the environment around you so that you have more control over your own biology, so you can do whatever you want to do,” said Asprey during an interview at the conference.

Asprey said he grew up in a state of poor health due to a moldy house and the standard American diet.

“I had arthritis in my knees,” he said.

Later, as an entrepreneur in the Silicon Valley, he said he weighed 300 pounds and felt tired all the time. Low-fat dieting and exercise didn’t help.

“I took my computer hacking skills and I turned them on myself, and I said, ‘I’m going to solve this.'”

Asprey spent hundreds of thousands of dollars on extensive blood testing and experimentation to find what his body responded to best. He lost 100 pounds and says he now has more energy in his 40s than he ever did in his 20s, and his findings even helped his wife overcome infertility problems.

He now recommends something akin to a paleo diet with no sugar, grains, or vegetable oil, a low to moderate protein intake, and copious amounts of saturated fat.

Due to his experience with the harmful effects of mold, Asprey created branded products such as coffee and chocolate that are supposedly specially processed and tested to eliminate mold toxins. He says these products commonly harbor legally-allowed trace amounts of mold, which can especially affect sensitive people.

Many potential customers balk at these products’ high prices, but Asprey says many helpful lifestyle changes discussed on his blog and on his podcast do not require buying his products.

As chairman of the Silicon Valley Health Institute, a nonprofit research group, Asprey also dabbles in things such as “smart” drugs to boost cognitive performance, or cryotherapy, using extreme cold to enhance immunity and curb pain and inflammation.

“I have a half a million dollar laboratory at home that I use to maintain myself,” he says. “I’m serious about living to 180 years old. How could I not share that with everyone else?”

Retired neurophysiologist Bill Hunter from Illinois attended the Bulletproof conference with his son after hearing about Asprey’s ideas about a year ago.

“I think a lot of it is based on good science,” he said. “Some of it is out on the edge, and some of it, I think, from my perspective, is a little bit beyond the edge, but that’s the idea of the whole thing, as I get it, that Dave wants to do, is to get people to become engaged and to think about these things in a systematic way and to apply them to themselves.”

Hunter said he began researching how to avoid age-related health problems as he started getting older. He said the literature convinced him to cut sugar out of his diet to reduce inflammation, which can also cause other problems.

He also began doing cross-fit and was eventually introduced to the paleo diet. He’s now 76 years old and can do squats and handstands.

“I’m in better physical condition now than I was eight years ago,” he said. “I’m very sold on that whole kind of approach to a lifestyle.”

Lindy Royer, a physical therapist and pilates teacher, came to Pasadena for the Bulletproof conference from her home near Denver. She loves the coffee.

“I serve it at some of our events, and people think I’m weird,” she said.

Royer said she’s been tweaking her diet and overall health for about 15 years after being diagnosed with an autoimmune disease. She’s renewed her energy and now finds she rarely gets sick.

“There are always things on the cutting edge that if you dig enough, you learn about it,” she said, “but the mainstream doesn’t hear about it until much later.”

Many media reports have been quite critical of Bulletproof products and ideas, citing a relative lack of research. But Asprey is unfazed.

“It’s healthy to have skeptics,” he said. “Drink Bulletproof coffee and notice how you feel. That would be a very important form of evidence.”