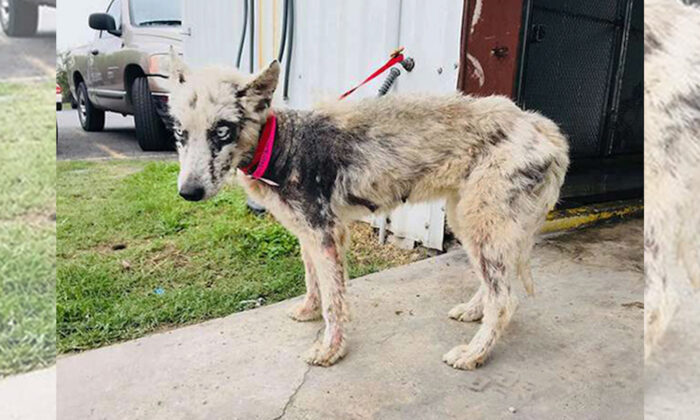 Can You Believe This Beautiful Husky Was on the ‘to-be-euthanized’ List? She’s Now Lovin’ Life

Homeless dogs don’t often look much rougher than this. This poor 1-year-old was disease ridden and starving. After being picked up, she was put on the “to-be-euthanized” list. However, the dog’s fate was about to do a turnaround.

A once-beautiful husky-cross was picked up off the street in Palm Valley, Texas. Named Skye, she had lost most of her fur because of mange, and also had a tick disease.

Skye looked like she had not seen food in quite a while, as she was so skinny and undernourished. When she was delivered to the local shelter, she was straight away doomed to be put down. Luckily for Skye, the shelter staff reached out to Rescue Dogs Rock NYC, hoping they might save her.

“The protocol at the shelter is that medical dogs get euthanized right away because they don’t have the means or the space or anything to treat them … We knew we had to pull her immediately, because she’d die if we didn’t,” Silverstein said, according to TheDodo.

They got Skye that very day and took her for a vet check before looking after her until a foster home became available. Fortunately, they found a temporary foster home in Texas for Skye while she recovered.

After a few weeks, another foster home was found in New York—this was Skye’s next lucky break.

“She [the mom] has got little kids and little dogs, and she [Skye] just kind of fit in perfectly, like it was meant to be … She’s an incredible dog.”

Just look at her now with her thick white coat. Who wouldn’t want her to be a part of their family?

Silverstein summed it up best: “We took this dog who was on death’s door, and look at her now. She’s gorgeous, stunning … and having the most amazing life.”

Thank goodness for such caring people in the world; they are just like guardian angels to many unfortunate animals.