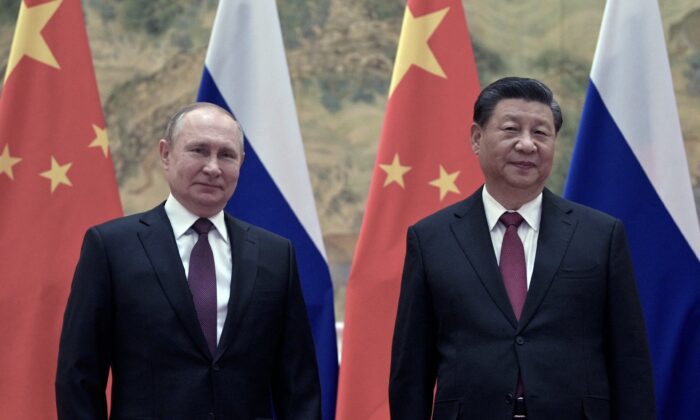 Can We ‘Contain’ the Enemies of Liberty?

In post-World War II Western intellectual circles, many were intrigued with the ideological vision of “socialism,” but few understood the ruthless ambitions of communist dictators.

One man who had firsthand knowledge about Joseph Stalin’s aggressive inclinations was a U.S. Foreign Service officer: George F. Kennan.

In 1946, writing as Mr. X, while he was chargé d’affaires in Moscow, Kennan outlined his position toward the USSR in a “long telegram,” which was later published in the journal Foreign Affairs.

Kennan concluded that “the main element of any United States policy toward the Soviet Union must be that of a long-term, patient but firm and vigilant ‘containment’ of Russian expansive tendencies.”

In 1949, Chinese communist leader Mao Zedong’s civil war victory led us to suspend relations with his so-called “Democratic People’s Republic.” The Sino–Russian bloc and the archipelago of client states that developed throughout the world were clearly viewed as enemies of liberty.

Proxy wars in Korea and Vietnam reinforced our resolve to disengage from what free nations came to regard as an “axis of evil.”

“Containment” provided the conceptual framework for a series of post-war initiatives undertaken to check communist expansion and limit the influence of totalitarian regimes.

The Tenuous Promise of Peaceful Coexistence

By the early 1960s, amid a chilling nuclear stand-off between East and West, optimistic thinkers began to imagine an alternative to containment. Some looked forward to a social, economic, and political “convergence” between capitalist and communist societies. It was thought that rational common goals and the requirements of interrelated international systems would lead naturally to a convergence of opposing societies and a mood for peaceful co-existence.

With regard to Russia and the West, convergence began with a period of détente in the 1970s and reached its apex in the transformative era of Ronald Reagan and Mikhail Gorbachev. Weakened by internal economic decline and under pressure from Reagan’s bold new defensive policy, hardline Russian communism collapsed under the weight of its own inner contradictions.

By the early 1990s, the Russian people appeared ready to recognize the independence of Soviet satellite states and reestablish a closer, more productive, relationship with the West.

Canadian Prime Minister Pierre Elliott Trudeau took a leading role in an international movement to recognize the People’s Republic of China and establish normal diplomatic relations with the communist regime in Beijing. In 1971, following the example of the Trudeau government, Republican President Richard Nixon surprised the world by announcing he would travel to Beijing.

Nixon’s visit to China in 1972 opened the free world to contrived images of a communist country filled with smiling children and happy workers. The USA and the PRC established diplomatic relations and signed a bilateral agreement that gave rise to rapid growth in trade between the two nations.

Two decades later, Democratic President Bill Clinton pushed Congress to approve a U.S.–China trade agreement and China’s accession to the World Trade Organization, claiming that more trade with China would advance the economic interests of the United States and its partners in the free world.

Unrequited affections seldom result in happy endings, and the West would soon discover that cultural Marxists are more inclined toward envy than love.

Over several decades, our retreat from the policy of “containing” tyranny bore bitter fruit in the West and did little to free ordinary people in Russia and China from oppressive regimes.

Late last century, we looked forward to a “new world order” based on democratic principles, fair trade, and the emergence of a global free-market economy. We imagined an “end of history” that would turn communist oppression around and usher in the triumph of liberty throughout the world. Despite our best intentions, we never got there. We underestimated the Nietzschean “will to power” deeply embedded in the DNA of Stalinists and Maoists.

Our trade and cultural integration with China grew enormously. But over the years, competition from low-paid Chinese labor led to significant setbacks for our home manufacturers. The CCP adopted coercive and destabilizing measures aimed at destabilizing our sovereignty, national security, and the rules-based international order. By the second decade of this century, middle- and working-class North Americans had concluded that the PRC was “eating our lunch.”

In the 1990s, Russia entered into a second marriage with the West under the affable stewardship of Boris Yeltsin. The honeymoon was short.

After Yeltsin, Russian political leadership fell to former KGB officer Vladimir Putin. Putin first became acting president, then president, then prime minister, then president again in 2012 and 2018. Following a referendum in 2021, he signed constitutional amendments that will potentially allow him to extend his authoritarian rule to 2036.

Putin’s rule has been marked by endemic corruption, crony corporatism, imprisonment and assassination of political opponents, suppression of media freedom, and electoral manipulation.

Like his present ally Xi Jinping, he has cynically disabused both old-school Marxism and post-modern “woke” culture in favor of a deceptive, neo-corporatist world order that seeks to disassemble the nations of the free world.

Putin’s brutal invasion of Ukraine, carried out with the discreet approval of his partner in Beijing, is a brazen example of their mutual ambitions.

Can Putin and Xi Be Contained?

During the Cold War, NATO aimed to “contain” the advancement of totalitarian regimes and restrict their influence within vulnerable independent nations.

The policy certainly wasn’t perfectly executed, but it did hold the free world together and prevent the kind of unchecked aggression that might have led to the outbreak of a third world war during the latter half of the 20th century.

But, the ability to contain aggression requires the will to act swiftly against it. When, in his 1961 inaugural address, President John F. Kennedy said, “Let every nation know, whether it wishes us well or ill, that we shall pay any price, bear any burden, meet any hardship, support any friend, oppose any foe to assure the survival and the success of liberty,” friends and foes alike were convinced that he meant business.

Kennedy wanted the world to understand that the United States was prepared to take a leadership role in protecting the free world. For multiple reasons beyond the scope of this article, we have to acknowledge that this is no longer the case. Over the past 70 years, America’s ability to project strength and come to the aid of friendly nations has been significantly undermined by forces from within the nation itself.

Beijing’s failure to suspend international travel from Wuhan in the early stages of the CCP virus contagion was a striking reminder of the disregard for human life that has characterized communism for the past 100-plus years. The invasion of Ukraine by a former KGB officer who seized control of Russia is the latest reminder that “convergence” was a self-defeating illusion.

In the long run, our capacity to contain Putin and Xi, hold tyrants to account, and preserve peace can only be accomplished through a return to the founding values of free nations.

From a moral and political perspective, we need to restore freedom of speech, assembly and religion, personal responsibility, the sanctity of life, the right to self-defense, secure borders, law and order, impartial judges, and election integrity.

With a view to renewing social and economic well-being, we need to restore fiscal responsibility, domestic manufacturing, and energy independence.

We need schools that promote well-informed citizenship over self-loathing and racial division. We need to support a strong, purposeful military, equipped with all the means necessary to secure our defense. In short, we need to overturn the pernicious agenda of our progressive political class.

Finally, we need to set aside ideological obsessions about the “sustainability” of the planet and summon up the kind of immediate and real courage being demonstrated by Ukrainian freedom fighters.

As in the era of JFK, the West should reembrace the idea that those who seek peace must be prepared for war.