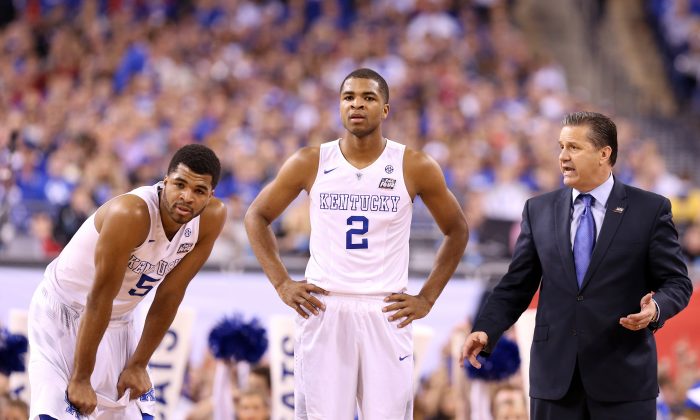 Can Too Much Talent Hurt You? Ask John Calipari

The Kentucky Wildcats and head coach John Calipari are fresh off, arguably, the greatest season ever for a team that didn’t win the national championship. Calipari’s ridiculously talented 10-man platoon system produced a record-setting 38–0 start, an appearance in the Final Four, and an SEC regular season and tournament title, all while tying the record for most wins (38) in a season—a record Calipari was already the sole owner of (in 2012 at Kentucky and 2008 at Memphis).

So why is Calipari, only the greatest recruiter of his time, having trouble replacing his seven early-entrants to the NBA this spring? (I’m speaking relative to his previous mammoth classes, of course, as this year’s four-man haul is ranked second overall by ESPN.)

According to an open letter posted Tuesday on his website, coachcal.com, titled “We may never platoon again, but players will always come first,” the successful coach clearly believes that his 10-man “platoon system” was being used against him in recruiting.

The 1,300-word PR piece—a letter clearly written to high-profile recruits that may be concerned about playing time at one of the country’s premier programs—touches on how they HAD to use the platoon system, how he doesn’t regret it, how he’ll never do it again, and how he didn’t think they’d lose to Wisconsin.

“It never entered my mind that we would lose, even late in the Wisconsin game or the Notre Dame game,” said Calipari.

Though the Wildcats fell two wins short of winning the championship this past April, there was little doubt that they had the best overall season.

Calipari’s 2014–15 squad, which will likely see an NBA-record seven players selected in the draft next month, had to make sure everyone got a fair amount of playing time. As such, no player averaged more than 11.0 points per game; and only one, Karl-Anthony Towns, averaged more than 22.0 minutes per game—a stat that’s not always popular with kids looking to be showcased for the NBA.

“The only way I could figure out for all of them to eat was to platoon. I didn’t feel comfortable trying to sub 10 guys in and out. I thought it would hurt every player if I did that.”

It would appear that Calipari certainly thought the lack of individual statistical accolades was being used again in recruiting circles. “It’s amazing people could try to use that against us, but I guess you have to come up with something.”

When you attract enough talent to produce 26 NBA draft picks in a six-year period, they kind of do.