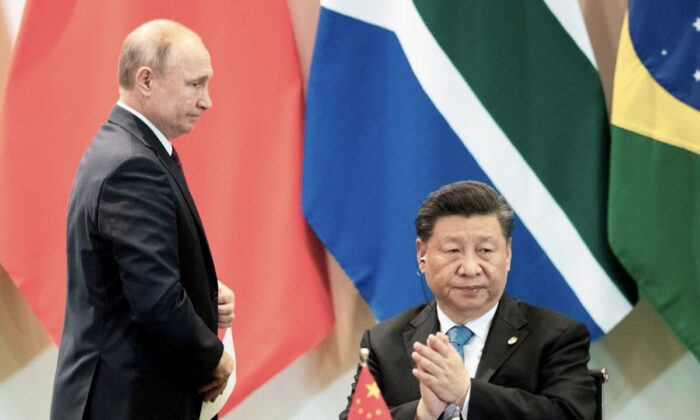 Chinese leader Xi Jinping and Russian President Vladimir Putin attend a meeting with members of the Business Council and management of the New Development Bank during the BRICS Summit in Brasilia on Nov. 14, 2019. (Pavel Golovkin/Pool/AFP via Getty Images)
Thinking About China

Can the West Actually Ostracize Russia?

The Russo-Ukraine war is upsetting the geopolitical balance of power in more ways than one.

Russia has been increasingly ostracized from the world community since its February invasion of western neighbor Ukraine. The most recent development in this process has been Moscow’s impending exclusion from the upcoming G-20 summit in Indonesia. U.S. President Joe Biden has voiced his support of this move as well.

In response to these reports, Kremlin Spokesman Dmitry Peskov nonchalantly brushed aside a rescinded invitation as “not fatal” to his country.

The decision of the Western world to entirely turn its back on Russia will facilitate Moscow’s turn to the east—this much is sure. Increasing the country’s economic dependence on China as Western markets become more hostile will strengthen Beijing’s geopolitical hand; however, this expanding influence has more to do with than just the bilateral relationship between Moscow and Beijing.

Sure, China will provide an important outlet for Russian oil and natural gas exports and other commodities such as agricultural products. But the decision for Beijing to stay silent on Moscow’s position in Ukraine will reverberate throughout the rest of the developing world as well.

Contrary to the impression conveyed by Western mainstream media, many developing countries are not as eager as the United States and Europe to condemn Russia’s decision to invade Ukraine. Instead, some have taken the lead of China and opted for a morally ambiguous analysis of the situation.

This isn’t reserved only for the usual suspect “rogue nations” such as Iran and North Korea. India, the world’s largest democracy and second-largest country by population, has agreed to find a common position with China regarding the current ongoing situation in Ukraine.

Chinese Foreign Minister Wang Yi arrived in New Delhi on March 25 for talks with his Indian counterpart Subrahmanyam Jaishankar. Both agreed that the primary consideration of the international community at the current time should be establishing a ceasefire in Ukraine and urging a diplomatic resolution to the conflict through dialogue and negotiations. Like China, India has refused to criticize Russia’s military operation in Ukraine and has abstained from voting to condemn Moscow in the United Nations.

India has indeed been a traditional ally of Russia in the modern era, but New Delhi has not enjoyed overwhelmingly positive relations with Beijing as of late. The ongoing border war over the Kashmir region between Pakistan and India has seen China often come out to condemn the latter. As such, the decision of the Chinese Communist Party (CCP) to decide to use the Ukraine crisis as a way to mend relations with India is significant.

This demonstrates how China is attempting to reap the most significant possible geopolitical advantage from the ongoing Ukraine crisis.

China, India, and Russia are all members of the emerging economy organization BRICS (in addition to Brazil and South Africa). The group will have an upcoming meeting this fall that is scheduled to take place in China. Foreign Ministry spokesperson Wang Wenbin announced on March 23 that the focus of this year’s summit would be a “new era of global development” and vaccine research and coordination.

While Brussels and Washington would like to cut Moscow off from the entire international community, the reality is that organizations such as BRICS are outside of their control. More than this, the fact that these nations find themselves in a similar stage of development means that, at least economically, they actually share more in common than they do with Western Europe or the United States.

Joining in on the moral condemnation of one or more of their partners adds unneeded animosity between one another. As they say, strength in numbers—it is better to have a united front against developed Western economies, which hold the financial and economic leverage to pressure smaller countries.

The developing world—such as the countries represented in BRICS—are learning that they can potentially defy the more powerful economies of the world if they maintain their solidarity. Many of the latter are considered OECD countries and have relatively high gross national income per capita and Human Development Index (HDI) scores.

However, Beijing and India have demonstrated that they can provide large and affluent markets for products that would otherwise be destined for the developed world. In particular, both have stepped in to arrange lucrative deals for Russian energy exports.

This ability to flout the dictates of the major Western economies has not always been available. China’s (and in part India’s) tacit support of Russia in an unprecedented 21st-century extraterritorial military operation in Europe means Beijing can present itself as a bastion of support for the economically downtrodden countries of the world—an example of defiance to the dictates of their former colonizers.

That is why speculation that China is wavering in its support for Russia is probably overblown. Secondary sanctions on Beijing for its role in helping Moscow bypass the Western world’s plan to economically punish Russian President Vladimir Putin are unlikely to make a serious impact. China has become too integrated into the world economy and is an integral part of the global supply chain.

The failure of the United States to comprehend this fact has led to our overreliance on China. We are now experiencing the painful reality of zero-sum power politics, in which the relative strengthening of one country equates to the weakening of its competitor.