Can ‘The Magnificent 20’ Remake the Republican Party for the Better? 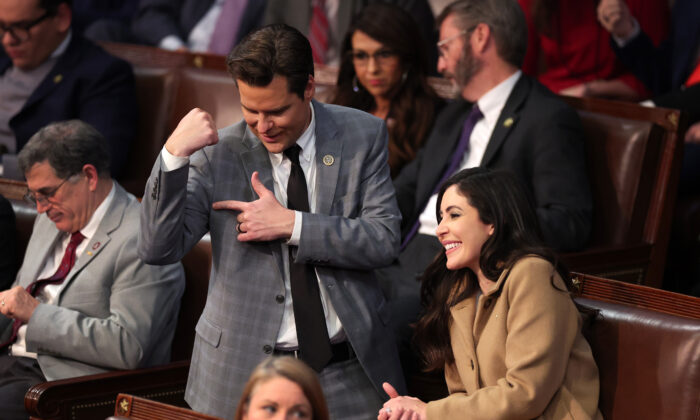 U.S. Rep.-elect Matt Gaetz (R-Fla.) flexes his arm alongside Rep.-elect Anna Paulina Luna (R-Fla.) after getting into an argument with Rep.-elect Mike Rogers (R-Ala.) in the House Chamber during the fourth day of elections for Speaker of the House at the U.S. Capitol Building in Washington, D.C., on Jan. 6, 2023. (Win McNamee/Getty Images)

The success of what we might call “The Magnificent 20”—after the film “The Magnificent Seven,” itself a remake of Akira Kurosawa’s classic “Seven Samurai”—who were able to win many concessions in return for allowing Rep. Kevin McCarthy (R-Calif.) to become speaker of the House, has implications far beyond Congress.

It could and should be a harbinger of a new Republican Party, a party that’s actually responsive to the people, to the will of its voters.

This would be something unique in recent American politics, right or left.

For this to happen, two important things must happen.

One, those voters must keep their politicians’ feet to the proverbial fire; in fact, they must redouble or more their vigilance.

Two, Republican establishment politicians must themselves do either of two things: get off the playing field or show some real courage by demonstrably, and not just verbally, reforming.

We’ll have a rapid measure of the latter with the behavior of McCarthy.

But it’s a far greater problem than that. The Republican Party, high and low—including all its institutions from the Republican National Committee down to the county level—are shot through with “Six Degrees of RINOism”—those who occasionally say the right things for the public, but rarely follow through in private.

Often, they deliberately obstruct real constitutional progress and the very things the 20 were fighting for. The primary interest of these people isn’t the wishes of the people but their own self-interest, preservation of power, and, most of all, financial gain.

Even at those lower levels—down to the selection of textbooks, local candidates for seemingly minor positions, and, it should go without saying, voting methods themselves—political power has become a royal road to riches. At the higher level, it has become a royal road to spectacular riches with Big Tech and Big Pharma, not to mention China, providing virtually limitless wherewithal.

To put an end to this and to honor the courage of “The Magnificent 20,” the Republican Party needs what communists used to call a rectification program. That’s becoming evident from those Republicans who are suddenly rising in resistance to the House Rules package with the bogus excuse that it was negotiated behind closed doors, as if it could have been done otherwise, given the current state of our country.

But there’s good news, optimistic news, with excellent ramifications for the future, including and especially the announcement that Rep. Jim Jordan (R-Ohio) will chair the select committee on the “Weaponization of Government.” Nothing could possibly be more urgent for the survival of our republic.

So let’s cheer on the work of “The Magnificent 20” and their comrades-in-arms, such as Jordan and the others who supported them in their quiet, let’s hope now-public, ways.

And if you’ll excuse this onetime Hollywood screenwriter (special advice: avoid the acclaimed but über-pretentious and boring “Tár” at all costs), I would like to explain my reference to “Seven Samurai,” which was directed by Kurosawa, possibly the greatest filmmaker of all time.

Douglas Laman describes the film this way at “The 11 Best Akira Kurosawa Movies, Ranked:” “The entire landscape of global cinema has been shaped by this film about seven men who must train a village to fight back against a horde of bandits.”

Can the entire landscape of American politics be changed by 20 men and women? There’s no question that what they’re fighting is a “horde of bandits,” almost in a global sense. But can they “train a village” (i.e., us) “to fight back”?

In the not-too-distant future, we’re going to find out.