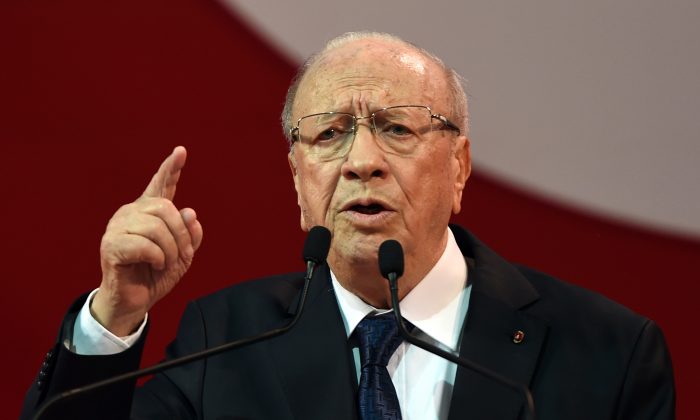 Beji Caid Essebsi, Tunisian leader of the main anti-Islamist party Nidaa Tounes and presidential candidate, gives a speech during a campaign meeting on November 15, 2014 in the capital Tunis. A total of 27 candidates are set to compete for the role of president, with former prime minister Beji Caid Essebsi, 87, widely tipped as one of the frontrunners. (Fethi Belaid/AFP/Getty Images)
Africa

Tunisia will hold its first presidential elections on Sunday, Nov. 23. Main candidates include former Interim Prime Minister Beji Caid Essebsi of the Nidaa Tounes Party, Moncef Marzouki of the Congress for the Republic (CPR), and Mustapha Kamel Nabli, a former governor of the Central Bank of Tunisia. The Islamist Ennahda party did not present a candidate, wrongly assuming that it would regardless become the strongest voice in politics. Instead, however, Tunisia’s main secular party, Nidaa Tounes, won 86 seats in the October 26 parliamentary elections, making it the biggest voice in the 217-seat legislature followed by Ennahda at 69 seats.

This signals a major shift in Tunisian politics, which have hitherto been marked by a dominant Ennahda and weak secularists. The parties that come next in line are the modernist Free Patriotic Union (UPL) with 16 seats, the leftist Popular Front with 15, and the liberal Afek Tounes with eight. What all of them have in common is that they did comparatively poorly during the 2011 Constituent Assembly election. This shows that many Tunisians are longing for a “new start” as they reproach the troika—the former coalition government of Ennahda, the CPR, and Ettakatol—for the country’s continuing economic malaise and emerging security challenges. The CPR earned only four seats in last month’s election, while Ettakatol was left empty-handed.

Secular parties were weakened under the troika by their internal fragmentation and inability to form strong coalitions. In response Essebsi created Nidaa Tounes in mid-2012 with the promise to unite secularists and counterbalance the Islamists. He is now trying to join with smaller secular parties to form a coalition. An alternative would be for Nidaa Tounes to create a national unity government, but this is currently more unlikely given that most secular parties have campaigned on anti-Islamism and fear alienating their base by teaming up with Ennahda. Creating a strong and lasting all-secular coalition will, however, also be challenging, given that many secular parties have little more in common than their opposition to Ennahda.

A History of Disunity

The secular parties that did comparatively well in the 2011 elections were the CPR and Ettakatol, parties that caught the revolutionary mood at the time by focusing on human rights and anti-establishment policies. But even these two parties were quickly weakened from inside when they decided to form a coalition with Ennahda, a step many of their members opposed. A particular problem was that party leaders and close associates made this and other decisions unilaterally, without consulting the rest of their respective parties. “During negotiations within the troika, the Islamists were the only ones who had to discuss decisions with the Majlis Shura [Ennahda’s main consultative body],” remembers a former minister of Ettakatol. “The leaders of the CPR and Ettakatol took almost all decisions themselves.”[1]

As a result, many secular party members became quickly alienated due to the decisions of their leaders, which they sometimes neither understood nor approved of. This led to a high number of internal resignations. The three biggest secular parties, the CPR, Ettakatol, and the opposition’s Progressive Democratic Party (PDP), have lost about half of their deputies over the last three years. The only time secular voices managed to unite was when Nidaa Tounes and the Popular Front led the National Salvation Front in July 2013 to force the troika government to resign. Once this was achieved, however, the coalition quickly broke apart, mainly owing to ideological differences between secular parties and leadership frictions amongst parties that are ideologically similar. Overcoming these splinters would be the main challenge of a Nidaa Tounes-led secular coalition.

Anne Wolf is a D.Phil candidate at the University of Oxford, St. Antony’s College, and an associate at the Center for the Study of the Middle East and North Africa at the University of Cambridge. She has spent the last three years in Tunisia conducting research on the country’s democratic transition and Islamism, as well as secular party politics. Her academic writings on the region have been published in the Journal of North African Studies and her articles have appeared in the Guardian, the National, Carnegie, and many other outlets. Wolf holds an MPhil in international relations from Cambridge University. For her current research activities she has been awarded a scholarship from the German Academic Exchange Service (DAAD).