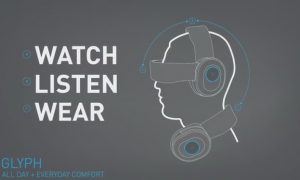 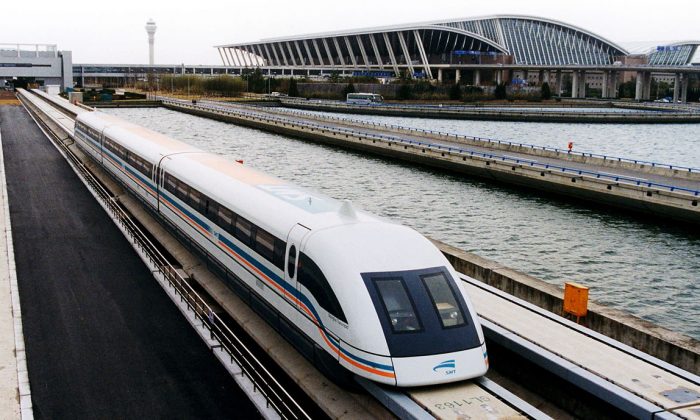 Faster than a plane? (Alex Needham, CC BY)
Tech

Trains that use magnets to levitate above the tracks might sound like something from Back to the Future, but the concept of magnetic levitation has been around for many years. Maglev trains, which use this technology, were first developed in the 1960s and many different methods have since been developed to free trains from their earthbound wheels, axles and bearings.

Maglev trains sidestep two of the limitations conventional trains have. First, the mechanical contact that conventional trains have between their wheels and the rails slows them down. Because a wheel typically weighs around a tonne, the wheel pummels away at the rail at high speed, needing regular maintenance to keep the track up to scratch.

Second, trains drive and brake themselves via this mechanical contact and therefore must carry propulsion equipment on board. This is fine at speeds of up to 400km/h (250 mph, the speed of proposed Britain’s HS2 line), but aerodynamics makes going much faster very difficult. The amount of power needed increases exponentially in proportion to the vehicle speed. For example, operating at 400km/h instead of 300km/h needs nearly two and half times as much propulsion power, so at very high speeds the propulsion needed becomes impractical.

A 19-mile journey in just a few minutes, all in first-person.

All Maglev technologies use some form of magnet – this could be a permanent magnet, an electro-magnet or a magnet using a superconducting coil. The train floats atop this magnetic field and is given support and guidance from the interaction that takes place between the magnet and another element on the ground, such as a steel track, a conducting element in the track or another magnet. Elimination of direct mechanical contact they can reach higher speeds.

Despite the variety of Maglev concepts that are possible, there are two common types. The first is known as the Electro-Magnetic System (EMS), and has an electro-magnet providing the force of attraction to a steel rail. The second is known as the Electro Dynamic System (EDS) which uses a powerful magnet. This interacts with a coil or sheet of aluminium in the track formation. When the magnet moves along the track a force of repulsion is generated, and the vehicle rises a few centimetres above the track, but only when moving at a considerable speed so wheels are still required at low speeds.

Of course driving and braking Maglev vehicles is still necessary – this is also achieved through magnetic effects. To achieve high-speed operation, coils are fitted to the track and these are used to create a travelling magnetic field which essentially drags the vehicles along by their magnets. Therefore it is no longer necessary to carry the heavy power equipment on the trains: instead the equipment is fitted to the track, making the trains lighter and able to travel significantly faster.

The Shanghai EMS Maglev Train operates regularly at 430 km/h, and in Japan JR Central’s prototype EDS Maglev system can run at more than 500 km/h. There are Maglev technologies that can push speeds up to around 600 km/h.

Interestingly, in the 1960s there was a general belief that 200-250km/h was the limit for conventional trains, but now we have regular service at over 300km/h, and 400km/h is entirely feasible. The mechanical contact between the wheels and the track remains, but it is also possible for the Maglev-style propulsion system to be used for normal trains, even though they don’t have the magnets.

The reality of getting trains up to speeds over 1000km/h (620 mph) is not as simple as the theory. Even Maglev trains have to contend with aerodynamics. This is why the higher speeds that have been postulated by the American entrepreneur Elon Musk in his concept Hyperloop (1500km/h, 930 mph) and the Chinese “Super Maglev” (2,900km/h, 1,800 mph) propose running in a partially evacuated tube to reduce the forces going against them. Such high speeds therefore depend upon the ability to construct and maintain a very accurately aligned guideway, within a low pressure tube over hundreds of kilometres. This is where it becomes really difficult, and very costly.

And yet some of these high-tech propositions make bold claims about cost. In reality transportation providers would be enormously excited by the prospect of reducing the system costs by 30% or 50%, but often the proponents of new concepts suggest much larger savings. For example, Musk suggests a 90% reduction in cost compared with a high-speed rail system, despite the sophisticated infrastructure that would be required. Unfortunately this takes the idea from being exciting to being unbelievable and may well be a case of Back to the Future.

Roger Goodall receives funding from EPSRC. He is affiliated with a variety of professional engineering institutions: Institution of Mechanical Engineers, Institution of Engineering and Technology, Royal Academy of Engineering. This article was originally published on The Conversation. Read the original article.