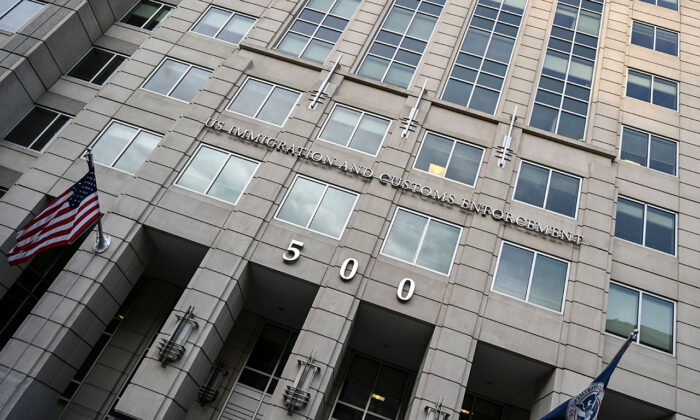 U.S. Immigration and Customs Enforcement building in Washington on May 9, 2019. (Eva Hambache/AFP via Getty Images)
Viewpoints

The labor force—those working or actively seeking work—remains 5.5 million short of pre-pandemic levels. The worker shortage is slowing the pace of the recovery. Though the teeming mass of asylum-seekers at the southern border might seem to offer a solution, it is doubtful in this matter that immigration can help much.

But there is also another, more fundamental labor shortage developing. It is demographic in origin. Decades of low birth rates have left a dearth of young workers to take the place of retiring baby boomers. Immigration can help in this important long-term matter, but only if Washington can do what it has failed to do for decades—reform the nation’s immigration system.

The immediate labor problem is a legacy of the pandemic. Many, for fear of infection, have avoided the workplace. No statistics exist on how much of the labor shortfall is due to this effect, but given the fears that grew up during the pandemic (and were actively promoted by the authorities and the media), the number is surely significant.

Meanwhile, lavish federal benefits have for many reduced the urgency of work. The extra unemployment benefits made it easy for large numbers of people to postpone the search for employment. These unemployment benefits had a special appeal to those with child care responsibilities, as they allowed them to save on child care expenses as well as gave them the added income. The special unemployment payout expired in September, which may explain the remarkable employment surge in October, but there are still other federal benefits that will slow the return to pre-pandemic levels of willing workers.

Recently, vaccine mandates have compounded the problem. Thousands, it seems, have either been fired for not complying or quit rather than comply. No direct statistics yet exist on the numbers so affected, but fragmentary anecdotal reports suggest that across the entire country, numbers easily could approach a million workers.

In this matter, immigration answers for little. The people at the southern border cannot answer, at least not in any reasonable amount of time. Even if, contrary to law, each was immediately issued a green card, many do not speak English, and it would take time for them to migrate to where workers are needed. The immediate shortfall may not lift quickly, but it will lift sooner than any arrangements with these people who can add to the active workforce. Nor do other sources of immigration promise much relief. The green card lottery may admit 1 million at most this year—some relief, perhaps, but far from complete. The H2-B visas promise 90,000 at most this year.

Fortunately, this shortfall will dissipate relatively quickly, if not quite as fast as Washington would like or forecasts. Fears will lift gradually as rates of infection recede as they are doing. Even if the disputes on vaccine mandates persist, they will also soften as rates of infection recede. Rising wages—up 4.6 percent in the past year, faster than in a long time—will also lure people into the workforce.

If immigration cannot help with the immediate worker shortfall, it could play a vital role in addressing the nation’s demographically driven labor shortage. This matter has not yet become acute, but the trends are undeniable. Low birth rates since the mid-1960s have constrained the flow of young people into the workforce, and now the huge baby boom generation has begun to retire. The Census Bureau reports that the nation presently has about 2.6 people of working age for every retiree, down from about 3.5 twenty years ago. By 2030, the bureau forecasts that figure will drop to barely over 2. Such a constrained labor situation, if left unaddressed, will slow growth significantly. A flow of work-able immigrants could help ease matters, but that solution will require radical immigration reform.

Presently, the U.S. immigration system favors those with family in the country. Whatever the virtues of this approach, it cannot answer to the economy’s needs. A more economically responsive system might gain from the systems used in Canada and Australia. In these nations, prospective immigrants receive points for years of education, for example, special skills, and whether they speak English. If they score high enough, they gain an immediate right to work. The system could help the United States in its demographic predicament, but it would require radical reform to the nation’s system—if what the United States has can be described as a system.