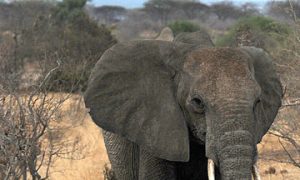 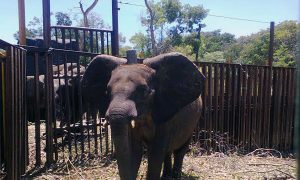 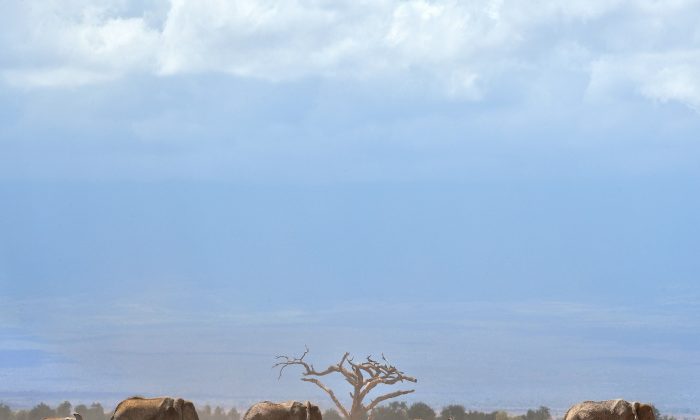 Can Elephants Retain Their Social Bonds in the Face of Poaching

As highly social animals—like human beings—elephants rely on their bonds to navigate everyday life. Group living helps elephants with the difficult decisions that they make on a regular basis—what to eat, where to go when the water dries up, how to parent.

And as with people, some social bonds are more important than others. Old age among the elephant matriarchs that lead family groups has been linked to more appropriate responses to predator noises, better recognition of the calls of elephants from other groups, and higher calf survival during droughts. These honed skills and the benefits they provide to younger family members may be critically important for animals that traverse vast and dynamic landscapes across African ecosystems.

Unfortunately, older elephants have also been the primary targets of poachers because of their larger tusks. Loss of these socially critical elephants may have long-lasting implications for surviving elephants. With ivory poaching reaching unsustainable levels over the last decade, my colleagues and I decided to investigate how the unnatural deaths of these cornerstone matriarchs affect the remaining elephants in their groups. How resilient are elephant social structures when important members are killed?

To find out, we analyzed observations of free-ranging elephants in the Samburu and Buffalo Springs National Reserves in northern Kenya between 1998 and 2014. That stretch included periods of low poaching and the more recent period of high poaching, intensifying in 2009. The high-poaching period was exacerbated by a severe drought that killed many old and very young elephants.

Each observation consisted of a list of elephants that we found in a group together while conducting transects across the reserves. Over the 18 years that Save the Elephants has maintained this field project, we’ve compiled an identification guide to individual elephants using unique physical attributes—an ear tear in the shape of a diamond, a broken tusk, a scar, a consistent fondness for the feel of the truck hood against one’s trunk. Elephants in these reserves have been exposed to tourist and research vehicles for decades, making it easy to approach and observe without disturbing them.

Typically, we drive along the Ewaso Ngiro River, a perennial water source that elephants and other wildlife are tied to in this semiarid savannah ecosystem. Elephants follow a predictable movement pattern in our study area, heading toward the river as the sun gets stronger and away from the river as the day cools. River transects are a great way to bump into elephants in the middle of the day, where families, bull groups, and lone males can be found drinking, feeding and resting.

Elephant groups vary in size dramatically between seasons, from families of 10 or fewer common in the dry season to groupings approaching 300 elephants in the wet season. Large groupings can be especially illuminating, as old friends reunite after extended separations and their calves intermingle. By recording which elephants are found in groups together and how frequently, we can calculate the strengths of relationships.

What We Know About Elephant Society

Female elephant social relationships give rise to networks within networks. Take my professional network as an analogy: the members of the laboratory in which I am training comprise those scientists I interact with most. This research group is one of several that make up our university department. Interdisciplinary programs within the university connect multiple departments, and my larger professional network may consist of those scientists to whom I may be one step removed through university affiliates (for instance, by LinkedIn contacts).

These nested groupings are clearly defined tiers that characterize my professional world, and each tier serves a function. The social interactions of very few species give rise to such emergent complexity, and elephant interactions are among those that do.

Females and their calves spend nearly all of their time with their core family groups traveling, resting and feeding. Bond group reunions occur less frequently, and clan groups even less frequently. Bond and clan groups come together more often during the wet season, when resources are abundant (easing limitations on group size) and elephants are healthy. These large groupings when life is good may facilitate information exchange and mating.

Old matriarchs are the leaders of their families, deciding when, where and with whom to group. Their choices are responsible for the emergence of these tiers of social contact. So what happens when they are killed?

Over the 16 years of our study, the Samburu population became significantly younger. Only 30 percent of the elephants in the recent period were present from the beginning of the study. Yet despite these changes, family and bond groups were as clearly distinguishable after poaching as they were before the disruption.

In some disrupted groups, females reached into their bond or clan groups from years earlier to reconstruct new groups. Sometimes this resulted in family groups that comprised nonrelatives.

From previous genetic work in the population, we know that elephants sometimes create family where they have none. We watched this process anew over the last few years as poaching intensified and females reached into their mothers’ extended networks. For example, the once-dominant Planets bond group—which previously had several matriarchs over 50 years old—now comprises two young mothers named Europa and Haumea and some surviving calves (Europa is the oldest mother at 23). Their new bond group includes the Flowers, elephants that were only clan group affiliates in the prepoaching years.

This work is showing us that elephant bond and clan groups may act as important buffers from social collapse, providing surviving females with a framework from which to build their own networks. The legacy of elephant mothers lives on in their daughters’ social choices.

Resilience, but Not Security

Perhaps it’s not so surprising that elephants have ways to cope with dramatic changes to their social landscapes. Social bonds are vitally important to elephant survival. And even before poaching reached unsustainable proportions, elephants had a history of perturbation in their societies due to hunting and drought. But this resilience is certainly impressive.

It’s likely not all good news, though. Our research could not include those females we couldn’t study, some of whom may have died themselves as a result of poaching in their families. Further, there may be downstream implications of losing grandmothers and mothers that we don’t yet know, such as higher calf mortality.

But the larger social structure of the population has remained relatively intact, indicating that there is overall social resilience in the population. Combined with recent findings that the price of ivory in China is dropping for the first time in years, our work provides some hope that elephant societies can recover if we give them space to do so.

Shifra Goldenberg is a Ph.D. candidate in ecology in the Department of Fish, Wildlife and Conservation Biology at Colorado State University. This article was previously published on TheConversation.com