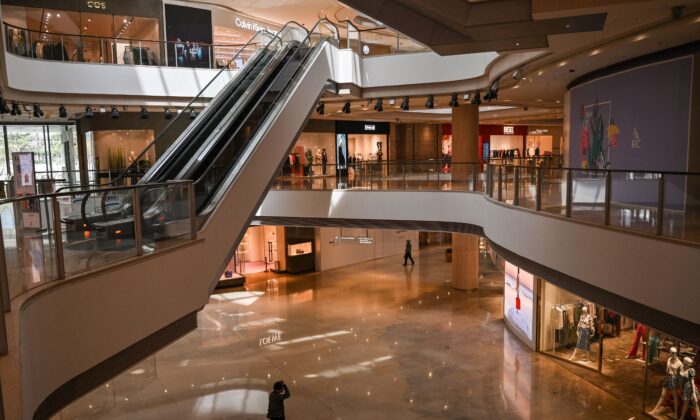 People walk in a shopping mall in Jingan district in Shanghai, China, on March 16, 2022. (Hector Retamal/AFP via Getty Images)
Thinking About China

Can China Transition to a Consumption Economy?

The great economist Michael Pettis at Tsinghua University has noted for years the importance for the Chinese economy to shift its growth dependency away from investment and toward greater consumption. As China faces its weakest sustained economic period in modern history, it bears worth asking, can China shift toward a more consumer-focused economy?

The Chinese economy is unique among major economies due to its low share of the household sector within the macroeconomy. Most economies typically have a household sector that accounts for 60 percent to 75 percent of activity. The United States, for example, hovers around 70 percent. In China, however, households account for only about 45 percent. This difference creates a wide variety of problems, from misunderstanding basic economic data to how to solve policy problems such as shifting activity.

The first problem this creates is when analysts compare cross-country data on debt to gross domestic product (GDP) in various formats, such as household debt to GDP. Due to the starkly different shares of income between households in China and other countries, Chinese households have significantly less income to repay debts than households in other countries. In fact, if we adjust household debt levels for household income rather than GDP, Chinese households are some of the most indebted in the world, even more than the United States and most Organization for Economic Cooperation and Development countries paying a significantly higher share of their income toward debt servicing due to interest rate differentials.

This simple, often overlooked adjustment has significant implications for how we conceptualize a move away from the investment infrastructure-driven growth model toward a consumption-driven growth model. While the 45 percent household share gives the superficial appearance that Chinese consumption can increase significantly, the reality is very different.

The Chinese consumer simply doesn’t have the financial capability to increase consumption share. Real estate sales are down with nominal sales of retail goods and services flat, meaning that after accounting for surging inflation, Chinese consumers are purchasing less than they did a year ago. Highly indebted—with a large percentage of their income being used to service debt—Chinese households simply don’t have the financial flexibility to ramp up spending.

While some may argue that high Chinese household savings rates will cushion the downturn, creating a path for a gradual transition to a consumption-led economy, this is also built upon a misconception.

Savings are typically thought of as liquid financial assets that can be used in times of distress, such as bank deposits or stock market holdings. However, we have simultaneously witnessed the Chinese household save at high rates and become highly indebted. How do we reconcile these seemingly confounding variables?

Chinese are saving and borrowing at high rates to facilitate real estate purchases still seen as backed by the state. So why is this important? It means that both variables are true, but the Chinese household depletes its liquid cash savings to purchase real estate. The savings still count as savings for the household but leave the household with minimal fallback in case of emergency. It’s misguided to believe a high savings rate will save the depleted, over-leveraged consumer seeking merely to service a high debt load.

So if households’ low income as a share of national income is the problem, is it possible to reallocate income away from investment toward households so they can increase total consumption? Shifting income in an economy, leaving aside the intractable politics of such a move even in China, isn’t simply a matter of snapping fingers to move money between accounts. Moving away from investment industries requires reducing employment and activity in highly indebted sectors, accounting for material amounts of bank assets, and employing millions of people.

It’s a major question whether companies from steel to real estate development could survive without bringing down the banking sector, even with the current trend levels of state support, direct or indirect, assuming the state even wanted to prioritize a shift away from an investment-reliant economy. Steel mills don’t just become high-tech industries, and those debts from real estate developers don’t just vanish when they demolish a building. Beijing finds itself in the unenviable position of not necessarily wanting to support these failing industries, but, conversely, risking cratering the entire economy if they don’t. This sucks up resources that may be used to nourish other industries, even if we assume that Beijing really wants to move away from investment-led growth.

Years ago, before it reached the critical nature of its economy, it was possible for Beijing to reduce its reliance on investment-led growth without destroying the financial sector. In 2022, it’s a highly dubious proposition that if Beijing didn’t support these failing industries, they could collapse without taking the rest of the economy into a crisis.

The fundamental problem is that all this debt absorbed by China—from corporations to households—has been used to purchase assets that simply don’t justify the prices based on the cash flow. Whether it’s real estate valued at 30 to 50 times income or high-speed rail lines that borrowed heavily to build a nationwide network with low ridership on most lines, the debt wasn’t used wisely to generate productive assets with a cash flow to repay those debts.

In reality, large amounts of debt used for investment were used for consumption. For example, with local governments selling land to developers, the revenue realized from purchases by consumers was spent on public goods and services. The savings consumed and debt incurred by consumers to purchase assets were effectively used to front-load public service provisions. The purchase of real estate assets at inflated prices only makes sense on the expectation that asset prices continue to rise near double digits for years into the future—an unlikely scenario at best.

With vast amounts of debt either allocated to unproductive uses or consumed, and industries needing public assistance teetering on edge, Beijing lacks the financial flexibility to cushion the blow of shifting resources away from unproductive industries toward more consumption. Large amounts of what we think of as savings and investments should actually be considered consumption. That high-speed rail line that doesn’t generate nearly enough revenue to meet its debt service obligation may bring social spillovers that make it a net positive—but that means the debt needs to be socialized and written down. Given the teetering financial system, Beijing can’t do this at a country level without vast amounts of new bank capital.

The unfortunate reality is that China needs to write down massive amounts of assets and raise enormous amounts of capital for its banks. It’s simply impossible to change the Chinese growth model to prioritize consumption absent a reality check on the finances. Lowering growth risks tipping these unproductive sectors into bankruptcy, triggering a large macro-crisis.

It’s a very accurate assessment to say that China needs to shift its growth and fundamental economic model. The cold, hard reality is, it can’t without triggering larger crises.