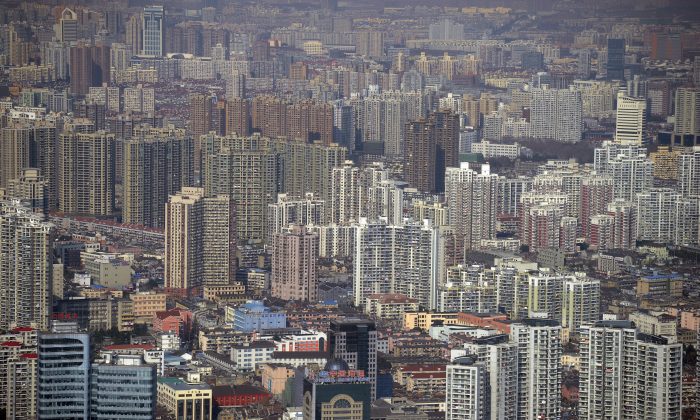 A view of the financial district of Pudong, in Shanghai, China, from the Jin Mao Tower, on Jan. 17, 2011. (Peter Parks/AFP/Getty Images)
China

Can China Escape the Skyscraper Curse?

Are China’s super tall new skyscrapers portents of doom, the inevitable omens of an economic bubble about to burst? China seems to think so.

Whether the economic downturns on which the Skyscraper Index, which links the construction of ultra-tall buildings with economic collapse, constructs its case are the result of a predictable economic cycle, some kind of modern day mummy’s curse, or nature punishing hubris, the Chinese regime appears to be nervous.

Only days after CNN said that China’s skyscraper construction boom might be “the harbingers of economic busts” and hints of an impending economic collapse, the Chinese regime administered a stern scolding in state media to cities engaged in skyscraper competitions.

Warning that although the Skyscraper Index is not considered a scientific concept, the state media concedes that the frenzy of skyscraper construction in China does send alarm bells ringing. There are 470 existing non-residential skyscrapers, 332 skyscrapers under construction and 516 more scheduled to be built in the country, with competition-sized buildings in Wuhan (with plans to make it the tallest in the country), Shenzhen’s 660 meter building, and the 700 meter Qingdao in Shandong, according to WantchinaTimes.

Cautioning cities to keep a cool head, and reminding them that an excessive number of skyscrapers could exacerbate the real estate bubble, state mouthpiece Global Times corrects the Chinese cities’ “shallow interpretation of urbanization,” while admitting that some correlation between skyscrapers and economic circles may in fact exist.

Authorities unexpectedly blocked the construction of the next world’s record breaking skyscraper, Sky City in Changsha, shortly after the impatient Broad Group started to break ground without official approval late in July.

When FT asked Sky City developer Zhang Yue last year if he expected to get the go ahead on the project, he told them, “We’ll definitely get approval. It’s just a question of timing,” but authorities ordered the work to stop when he pressed ahead without them.

Analysts already tense over China’s economic slowdown have been glancing anxiously at the Skyscraper Index and China’s real estate bubble for over a year, ever since international investment bank Barclays Capital singled out China and India in January 2012, warning that “Our Skyscraper Index continues to show an unhealthy correlation between the building of skyscrapers and impending financial crisis—New York 1930; Chicago 1974; Kuala Lumpur 1997 and Dubai 2010,” AFP reported.

Each of those places built or began building the tallest building in the world right before an economic collapse.

Barclays Capital concluded, “For if history proves to be right, this building boom in China and India could simply be a reflection of a misallocation of capital, which may result in an economic correction for two of Asia’s largest economies in the next five years.”

With a disquieting precision, the Skyscraper Index, “has a good 150-year correlation between the world’s tallest buildings and economic slowdowns and recessions,” said CIMB Group economist Andrew Lawrence, who invented the index.

“For China, there is no reason that correlation will change,” he said to CNN earlier this month.

China’s state media reassured their readers that there is no cause for worry by pointing out that the 1931 completion of the world’s tallest building, the Empire State Building, when the United States was on the rise (rather than actually in the depths of The Great Depression) did not result in the collapse of the country.

State media neglected to tell their Chinese readers that the plans for the Empire State Building were released just two months before the great stock market crash in 1929, when the United States entered the country’s Great Depression.