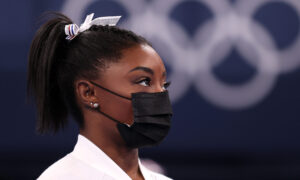 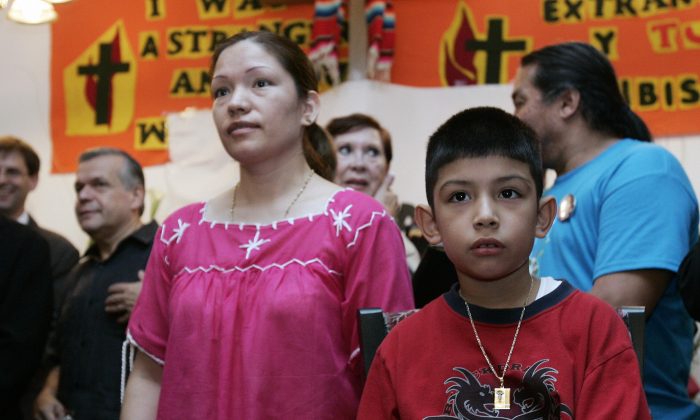 Immigrant rights activist Elvira Arellano (L) of Mexico stands with her U.S.-born son Saul at a press conference inside the Adalberto United Methodist Church on Aug. 15, 2007, in Chicago, Illinois, where she had taken refuge for a year because she faced deportation. She became the poster child for those who argue that illegal aliens with U.S.-born children should never face deportation. (JEFF HAYNES/AFP/Getty Images)
Viewpoints

Can Birthright Citizenship Be Stopped Without Constitutional Amendment?

President Donald Trump announced plans on Oct. 30 to issue an executive order that would end the practice of giving U.S. citizenship to children of illegal aliens.

By taking this bold action, the president is poised to make history by forcing the U.S. Supreme Court to issue its first clarification on whether U.S.-born children of illegal aliens are entitled to birthright citizenship. Following the president’s lead, Sen. Lindsey Graham (R-S.C.) expressed his support by stating his plans to file legislation addressing the matter.

Birthright citizenship comes from the 14th Amendment’s citizenship clause, which states, “All persons born or naturalized in the United States, and subject to the jurisdiction thereof, are citizens of the United States and of the State wherein they reside.” Although some scholars argue it would take a constitutional amendment to end the practice, others point to statutory language and the text of the 14th Amendment to argue that Congress has the authority to address the matter.

Contextually and historically, the 14th Amendment was never meant to be a loophole entitling individuals from other countries to automatic citizenship. Adopted in 1868, the amendment was a correction to an injustice against African slaves and their U.S-born children who found themselves stripped of citizenship after the 1857 Dred Scott v. Sandford decision. It ruled that African slaves and their descendants were not—and could never—become U.S. citizens.

Writing for the Tennessee Star, constitutional amendments expert Gregory Watson cites the 1952 Immigration and Nationality Act as a legal basis for clarifying the issue. Watson refers to “Section 202, Pub. L. No. 82-414,” which, in part, reads “(3) an alien born in the United States shall be considered as having been born in the country of which he is a citizen or subject.”

Watson’s reference to Public Law 82-414 and the arguments of lawyers and scholars who believe a proper congressional clarification of the “subject to the jurisdiction thereof” clause provide a legal basis for ending birthright citizenship. This issue is important, has real-life consequences, and needs to be clarified by the Supreme Court.

The Pew Research Center estimates that about 250,000 babies were born in the United States in 2016 to parents residing in the country illegally. An estimated 36,000 additional babies are born to parents from around the world who come legally as part of the birth tourism trade. It is perfectly legal for pregnant women to travel to the United States for medical reasons, including childbirth. Note, though, that children subsequently raised in their parents’ home country become status symbols who can sponsor other members of their families for citizenship once they reach age 18.

Millions of Americans first learned about birthright citizenship and mixed-status families when Elvira Arellano, a twice-deported Mexican mother with an American-born son, defied the second deportation orders by seeking sanctuary in Adalberto United Methodist Church in South Side Chicago. Between August 2006 and August 2007, Arellano held press conferences and garnered headlines before she was eventually arrested and deported after she left the church for a speaking engagement.

She returned to the United States in 2014 and asked for asylum. In 2017, she was granted another year of U.S. residency. How Arellano’s case is resolved will have political implications because she is the poster child for those who argue that illegal aliens with U.S.-born children should never face deportation.

Whether the president is successful or not at unilaterally ending the practice of birthright citizenship, he is certain to force a showdown over the matter. Public Law 82-414 and the legal analysis of professors Peter Schuck and Rogers Smith in their 1985 book “Citizens Without Consent: Illegal Aliens and the American Polity” suggest the issue can be resolved without a constitutional amendment.

Schuck and Smith wrote: “The Fourteenth Amendment’s Citizenship Clause makes birthright citizenship for the children of illegal and temporary visitor aliens a matter of congressional choice rather than constitutional prescription.”