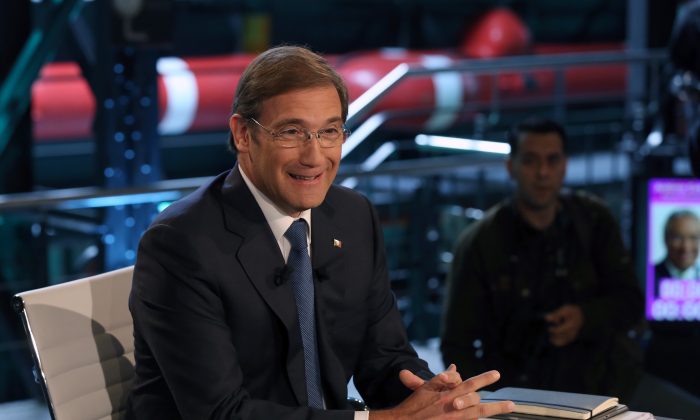 Can Austerity Win an Election? Portugal Offers an Insight

The country began the official campaign period for its Oct. 4 general election Sunday, and opinion polls in recent weeks have suggested the center-right coalition government is roughly level with the main opposition Socialist Party.

Over the past four years the government has adopted unpopular austerity policies as it complied with the terms of a 78 billion euro (then $102 billion) bailout Portugal received in 2011 during the eurozone financial crisis. With the frail economy showing signs of recovery, the government argues that Portugal cannot afford a return to borrow-and-spend policies.

The center-left Socialists, while promising to stick to eurozone spending rules, want to ease austerity and spur consumption that they say will make the economy grow faster.

The governing Social Democratic Party and Popular Party, and the Socialists, are together expected to collect more than 70 percent of the vote, as in previous ballots.

Moderate parties have traditionally held power in Portugal and even though austerity policies are at the heart of the election, Portugal has not witnessed the rise of any radical parties like Syriza in Greece, or Podemos in neighboring Spain.

The Algerian Elections and the Status Quo

Recent economic news has given heart to the government. After three years of recession, the economy grew 1.5 percent in the first half of the year compared with 2014. Also, the jobless rate, which hit a record 17.7 percent in 2013, has continued to slide, falling to 12.1 percent in July. That’s the lowest rate since 2010.

“If we stay on the path we’ve been following, we won’t need any more bailouts,” Prime Minister Pedro Passos Coelho said during a live radio debate last week.

More positive news for Passos Coelho came Friday when ratings agency Standard & Poor’s revised its long-term rating for Portugal upward one notch to BB+ from BB, having found the country’s progress was “in line with our expectations, putting net government debt to GDP (gross domestic product) on a declining path after 15 consecutive years of increases.”

The agency said it expected the policies to continue on the current path, “regardless of the outcome of Portugal’s upcoming general elections in October.”

The Socialist Party says it can give the economy a bigger push by reducing personal taxes and reversing government workers’ pay cuts, thereby encouraging people to spend more.

“Now’s the time to turn the page on austerity,” Socialist leader Antonio Costa said. “Our goal is to ease the tax burden.”

The Socialists dispute the unemployment statistics, saying short-term training programs and mass emigration in recent years mean the figures give a false picture.

Portugal’s 9.7 million eligible voters will elect lawmakers to a four-year term in the 230-seat Parliament in Lisbon.