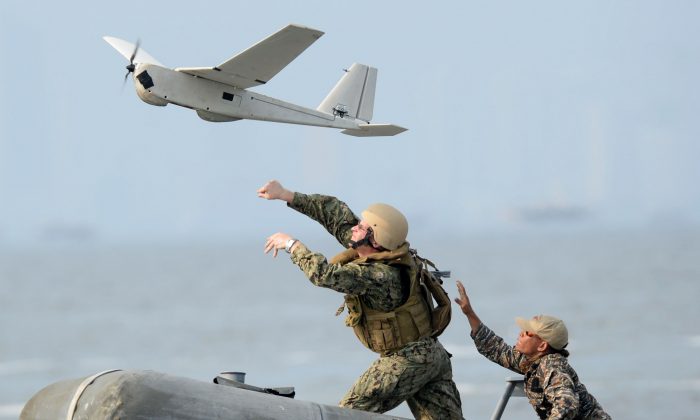 U.S. (L) and Philippine navy personnel launch an unmanned aerial vehicle (UAV) from a speed boat west of Manila as part of joint exercises on June 28, 2013. The annual exercises were held off the west coast of the Philippines' main island of Luzon, close to Scarborough Shoal, which China insists it owns. (Ted Aljibe/AFP/Getty Images)
Opinion

Can ASEAN Respond to the Chinese Challenge?

China and the 10-member Association of Southeast Asian Nations, ASEAN, resumed consultations on the South China Sea in Singapore Tuesday.

In theory, active work on a declaration and code of conduct for the South China Sea—the arena of conflicting territorial claims—should ease tensions, but the opposite may be true.

Although consultations on the DOC and COC are proceeding in parallel, China insists that priority should be given to implementing the DOC. ASEAN would prefer separate consultations on the DOC and COC, with the latter raised from working group to senior-official level. ASEAN also advocates an “early harvest” approach on the COC—as soon as agreement is reached on one issue it should be implemented immediately, not waiting for agreement on the entire COC. ASEAN also would like the COC to be legally binding.

In private, ASEAN diplomats state they would like the COC finalized before the end of 2015 when the ASEAN Political-Security Community comes into being.

ASEAN faces at least two problems in its pursuit of a COC with China. First, although the DOC enjoins the parties “to exercise self-restraint in the conduct of activities that would complicate or escalate disputes and affect peace and stability,” China has continually altered the status quo in its favor through unilateral actions.

For example, in November, China announced its prerogative to establish an Air Defense Identification Zone over the South China Sea. Also that month, Hainan provincial authorities announced revisions to fishing regulations covering nearly 60 percent of the South China Sea including the exclusive economic zones of several claimant states. Under the revised regulations, foreign boats are required to seek prior permission before fishing in this area. In January, China commenced regular patrols to enforce these regulations; authorities report arrests of foreign fishing boats on a weekly basis.

The second problem for ASEAN in attempting to secure an agreement on a binding COC with China is maintaining unity during negotiations. Beneath ASEAN’s veneer of diplomatic unity on South China Sea issues, individual members remain divided on how to pursue a binding COC.

For example, domestic political tensions in Phnom Penh could result in Cambodia once again playing the spoiler role on South China Sea issues at China’s behest. The Hun Sen government is beset by mass protests over its manipulation of national elections. China has shown signs of distancing itself from Hun Sen. Opposition leader Sam Rainsy, perhaps hoping to capitalize, has stated his belief that Chinese territorial claims in the South China Sea are valid. If Sam Rainsy should take office and endorse Chinese maritime claims, Cambodia would be the only ASEAN member country to do so.

The four ASEAN claimant states to the South China Sea hold differing views on the South China Sea. The Philippines broke ranks with ASEAN by unilaterally filing a claim with the United Nations asking for an Arbitral Tribunal to make a determination of its legal entitlements under the U.N. Convention on the Law of the Sea—without prior consultation with other ASEAN members. China privately lobbied other ASEAN members not to join the Philippines.

The Arbitral Tribunal has been set up. The Philippines must submit its full statement of claims by March 30. Vietnam and Malaysia weighed the pros and cons of joining the Philippines, though appear to have adopted a wait-and-see attitude.

Vietnam claims sovereignty over the Paracel Islands and would like this archipelago included in the COC’s geographic scope. Other members of ASEAN view the Paracels as a bilateral matter between Beijing and Hanoi. In contrast to the Philippines, Vietnam has managed to keep the South China Sea dispute from affecting its overall bilateral relations with China.

In 2013 and in January this year a People’s Liberation Army navy flotilla traveled to James Shoal, 80 kilometers off the coast of East Malaysia and the southernmost point of China’s nine-dash line claim to the South China Sea. Official Malaysian spokespersons incredulously denied knowledge of these events.

Malaysian officials are aware of illegal Chinese fishing activities and other assertions of Chinese sovereignty in the exclusive economic zone. In 2013, for example, Malaysian diplomats privately briefed academics from an ASEAN think tank and told them that aerial photos confirmed that PLAN flotilla near James Shoal.

This year, after Malaysian officials denied knowledge of the PLAN visit to James Shoal, the chief of the Malaysian armed forces confirmed the Chinese flotilla had been monitored as it “strayed into Malaysian waters. … As long as it was an innocent passage, that is okay with us.” Malaysian officials privately stated that the “see nothing, know nothing” stance is dictated by Prime Minister Najib Razak, who controls South China Sea policy and suppresses official statements critical of China. Yet a day after Malaysian the prime minister presented on the search for flight MH307 at a press conference, commentary in Xinhua, March 15, noted that the efforts were “either a dereliction of duty or reluctance to share information in a full and timely manner.”

The Philippines hosted the first ASEAN Claimants Working Group on Feb. 18 in an effort to forge consensus among the states most concerned. In a blow to ASEAN consensus, Brunei failed to show. A month earlier, Brunei also declined to participate in a side meeting with three other claimant states at the ASEAN Foreign Ministers Retreat in Burma. One positive aspect of that meeting, according to observers, was that Malaysia played a more engaged role than previously.

In the lead up to the renewed ASEAN-China consultations, the United States has played a more proactive role in pressing China to bring its maritime territorial claims into accord with international law. The core members of ASEAN appear to be more unified than previously in pressing China to agree to cease unilateral actions that undermine regional security.

Carlyle A. Thayer is emeritus professor, The University of New South Wales at the Australian Defense Force Academy, Canberra. © 2014 The Whitney and Betty MacMillan Center for International and Area Studies at Yale.