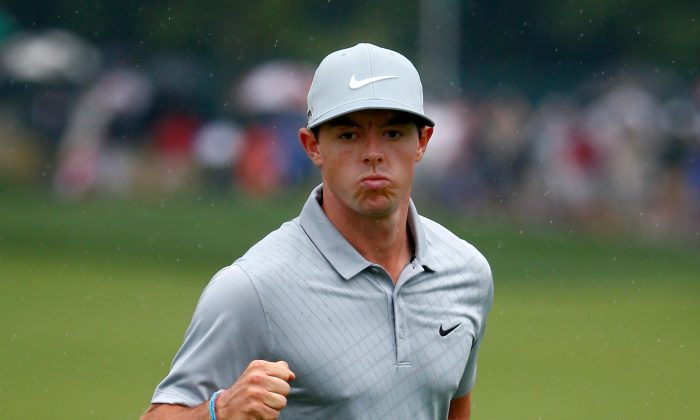 Rory McIlroy of Northern Ireland celebrates an eagle putt on the 18th green during the second round of the 96th PGA Championship at Valhalla Golf Club on August 8, 2014 in Louisville, Kentucky. (Sam Greenwood/Getty Images)
Golf

Can Anyone Slow Down Rory?

LOUISVILLE—The word momentum is often used in sports—and for good reason. When a talented team or individual is on a streak that is beyond what mere words can describe it’s something behold. Case in point: Rory McIlroy. Winning his third different major by age 25 has only been done by the likes of Jack Nicklaus and Tiger Woods—impressive indeed. But McIlroy didn’t just win The Open Championship at Royal Liverpool last month and decide to coast along.

His win last week at the Bridgestone Invitational was overpowering—of both Firestone South and the field.

Now Rory is doing likewise, thus far, with the final major of the year—the PGA Championship at Valhalla.

Consider what happened in the first round Thursday. McIlroy was cruising along at three-under for the front nine when he hit his second shot at the par-5 10th out-of-bounds and ended up double-bogeying the hole. Instead of the bleeding stopping there McIlroy also bogied the next hole—the par-3 11th. For many players, even the most talented it can be a difficult chore to put the bad holes in perspective and in one’s rear view mirror. McIlroy did that and more. Four straight birdies followed, finishing up with an additional one for a round of five-under-par 66—just one shot off the pace.

In today’s second round, McIlroy played a bit more conventional golf, highlighted by an eagle at the par-5 18th and two birdies in the final three holes to send a very loud and clear message to the field that someone is going to have to hunt him down for the final 36 holes.

Nonetheless, there’s still 36 holes to play at Valhalla. But like Tiger Woods, McIlroy doesn’t look back or decide to on cruise control when playing. He has fashioned a style that can be at best defined as controlled aggression. His play with the “Big Dog”—the driver—has been stunning for its effectiveness and wherewithal to do what others often fear will happen—just ask Tiger Woods about his non-obeying “Big Dog.”

Rickie Fowler has played the most consistent in all three previous majors in 2014 and stands at seven-under-par for the championship—only two behind. Just three shots behind is Phil Mickelson who is carrying on from his fine final round 62 at Firestone last week. Both of these challengers, as well as a few others—namely Jason Day who is one shot behind—will push McIlroy, no doubt.

McIlroy has displayed an inner calm even when things have gone otherwise for him. At The Open he ended all question about who was going to win The Claret Jug when he eagled two of the final holes—both par-5’s—during Saturday’s third round. What he did in the first round here at Vahalla is another example that when the going gets tough, Rory roars.

The final major of this year’s golf calendar should provide plenty of fireworks—much is certainly at stake with Ryder Cup positions in play for the USA squad. Like Tiger Woods used to do, it’s unlikely Rory will backpedal and allow others to climb the leaderboard because of critical errors he causes. In sum, those chasing him had best be ready to come out smoking and showing they’re up to the task. In the Woods era, no player—save for Bob May in the 2000 PGA here at Vahalla—stepped up and pushed Woods harder than anyone ever has. Much is at stake this weekend in Louisville, but until shown otherwise Rory McIlroy is playing for keeps and wants to add nothing less than a second Wannamaker Trophy to add to his growing collection of major championships.