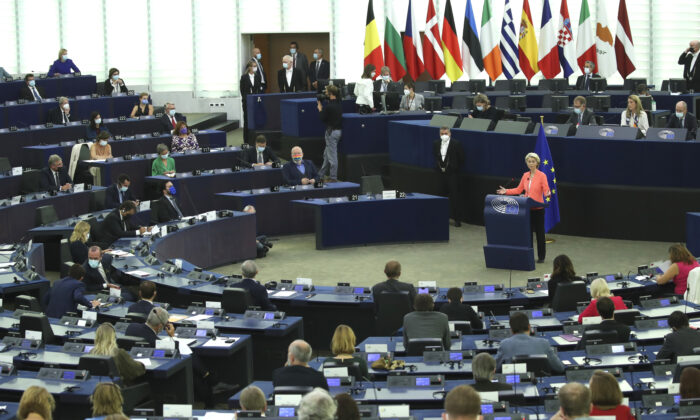 European Commission President Ursula von der Leyen delivers a State of the Union Address at the European Parliament in Strasbourg, France, on Sept. 15, 2021. (Yves Herman/Pool via AP)
Thinking About China

The European Union recently announced the launch of “Global Gateway,” a bold project designed to compete with China’s Belt and Road Initiative (BRI).

I use the word bold intentionally. After all, the effects of China’s BRI (also known as “One Belt, One Road”)—a global infrastructure expansion strategy adopted by the Chinese Communist Party (CCP) in 2013—can be felt in 140 different countries around the world. Considering that there are only 195 countries in the world, the CCP has made considerable ground in the space of just eight years. Can a weakening EU really compete with China, or is the “Global Gateway” just a load of globalist gibberish?

In the second week of September, during the annual State of the Union address, European Commission President Ursula von der Leyen declared the EU’s intentions to turn the Global Gateway “into a trusted brand around the world.” The EU, intent on building partnerships “with countries around the world,” will invest “in quality infrastructure, connecting goods, people, and services around the world,” she told those in attendance.

At no point during her address did von der Leyen shy away from the EU’s primary target—China. Although the CCP must be challenged and the BRI poses significant threats to many vulnerable countries, is the EU equipped to compete with Beijing? Call me a pessimist, but I have significant doubts. One of the reasons for this pessimism involves the EU’s history, which is littered with failures. The EU was created, first and foremost, to bring an end to the numerous, violent wars between neighboring countries. Since then, Europe has been relatively peaceful. This, for many, shows the success of the EU. However, as the academic Olivier Tonneau has noted, it’s simply a “myth that the unprecedented period of peace between European nations is due to the EU.” He’s right. In 1991, the Maastricht Treaty laid the foundation for the EU of today. Since then, the EU has billed itself as a democratic force—a direct representation of the people of Europe. As a European, and someone who was but a toddler when the Maastricht Treaty was signed into effect, I fully believe that the EU has rarely failed to fail its people. In Tonneau’s words, a number of “the EU’s current treaties were implemented against the will of its peoples.” These include the referenda in France (May 29, 2005), the Netherlands (June 1, 2005), and Ireland (June 12, 2008). Every one of these resulted in “no” votes; nevertheless, the elites in Brussels implemented “revised versions.” These treaties, according to the author, paved the way for future austerity policies imposed on the citizens of Europe, which stirred “popular discontent” across the continent. Again, he’s right.

What’s my point? Where am I going with this? The EU is busy billing itself as an anti-China alternative. However, by failing to respect the will of the people, it actually governs in an eerily similar way to those in Beijing.

But all is not lost. Perhaps the “Global Gateway” will be a turning point. Maybe, in the not so distant future, it will offer developing countries a superior alternative to China’s BRI. Right now, there has never been a better time to capitalize on China’s weaknesses. To paraphrase the German economist Rudger Dornbusch, crises take a much longer time to come than you think, but when they arrive, they happen much “faster than you would have thought.” At the time of writing, China is a country swimming in a sea of crises. Take Evergrande, for example, China’s second-largest property development. With liabilities of $305 billion, there are legitimate fears that the company’s woes could cripple the economy. To compound matters, China recently experienced a self-inflicted blackout. As its economy veered into darkness, so did millions of homes across the country. Because of this “power crunch,” Goldman Sachs recently cut China’s growth forecast to zero in the third quarter of this year.

Then, of course, there’s China’s vast BRI, the very thing the EU is attempting to counter.

According to a new study by AidData, a research and innovation lab located at the College of William & Mary in Williamsburg, Virginia, Chinese leader Xi Jinping’s “project of the century” is fast becoming the failure of the century. “A growing number of policymakers in low- and middle-income countries are mothballing high profile BRI projects because of overpricing, corruption and debt sustainability concerns,” the authors wrote.

A staggering 35 percent of the BRI infrastructure projects have “encountered major implementation problems—such as corruption scandals, labor violations, environmental hazards, and public protests,” according to the report. Interestingly, and somewhat oddly, the CCP’s infrastructure projects “outside of the BRI” have encountered far fewer implementation issues. Because of the Chinese regime’s recklessness and dishonesty, 42 low- and middle-income countries (LMICs) “now have levels of debt exposure to China in excess of 10% of GDP.” The EU’s new initiative could prove to be a roaring success, largely because China’s BRI offers customers false hope and unimaginable levels of debt.

Now, for the first time in three decades, the EU has the opportunity to become an undeniable force for good. Let’s hope, for once, that it actually delivers on its promises.