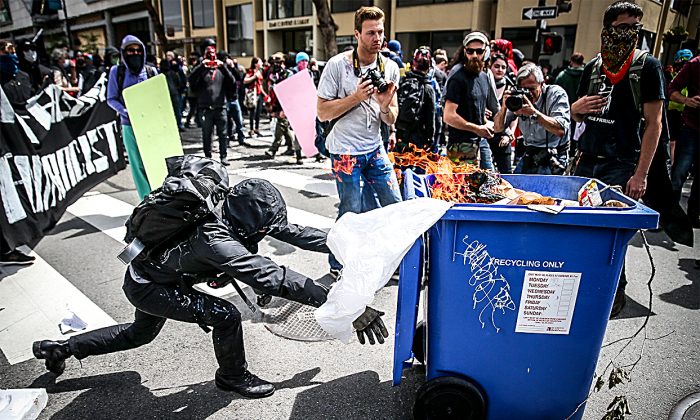 Campuses Turn Against Free Speech, Open the Door to Thuggery

Some speech is understood as violence, which justifies violence in return

The doctrines taught in our schools are now spilling out onto our streets, and political thuggery is becoming part of American life.

On April 15, in Berkeley’s Martin Luther King Jr. Civic Center Park, a free speech demonstration by supporters of President Trump quickly degenerated into a riot, as pro- and anti-Trump forces began fighting one another.

The fighting was not a surprise. Several of the Trump supporters had shown up at the event carrying homemade shields, wearing helmets of different kinds, and carrying sticks.

Arrayed against them were members of the group Antifa, which is short for anti-fascist. Dressed in black, often wearing ski masks or black bandanas over their faces, the Antifas have used what are called black bloc tactics at events across the country to shut down free speech.

A campus where a majority of students are fearful to speak openly because they know a minority will jump on them is no longer an intellectually free campus in any meaningful sense.
— Charles Murray, author

The Antifas had previously attacked at a March 4 Trump rally in Berkeley, which may explain the preparations the Trump supporters made for the April 15 event.

At the March 4 event, police confiscated metal pipes, bricks, baseball bats, and two-by-four blocks of wood from the crowd, according to The Washington Post.

The brawl in Berkeley would seem to be far removed from the sedate campuses of Wellesley, Middlebury, and Claremont University, expensive private schools where parents pay top dollar for their children to receive an Ivy League-quality education.

But at these schools, one sees theories that justify limiting free speech and open the door to violent action.

Recently, the Wellesley College newspaper ran an editorial defending the college against the opinion that it is becoming “an environment where free speech is not allowed or is a violated right.”

The editorial sets out the correct principles for understanding free speech: “Wellesley is certainly not a place for racism, sexism, homophobia, Islamophobia, transphobia, or any other type of discriminatory speech. Shutting down rhetoric that undermines the existence or rights of others is not a violation of free speech. … The spirit of free speech is to protect the suppressed, not to protect a free for all where anything is acceptable, no matter how hateful or damaging.”

The editorial stands on its head the traditional understanding of free speech. Supreme Court Justice Louis Brandeis in a 1927 decision wrote that in situations that do not involve imminent danger, “the remedy to be applied is more speech, not enforced silence.” The corrective to bad speech is good speech.

The Wellesley editorial, though, feels the danger of bad opinions is so great that those expressing them must suffer consequences: “If people are given the resources to learn and either continue to speak hate speech or refuse to adapt their opinions, then hostility may be warranted.”

What exactly “hostility” involves, the editorial does not say.

The Myth of Truth

A recent example of hostility on college campuses was the successful attempt by a mob at Claremont University’s Claremont McKenna College to prevent Heather Mac Donald, an expert on policing and a critic of the group Black Lives Matter, from giving a speech on April 6.

The president of Claremont’s Pomona College, where many of the members of the mob study, the next day issued a letter explaining that preventing an invited speaker from engaging with others was not acceptable.

A group of 20 students responded with a revealing open letter, which says, “Historically, white supremacy has venerated the idea of objectivity and wielded a dichotomy of ‘subjectivity vs. objectivity’ as a means of silencing oppressed peoples.”

Like the Wellesley editorial, this open letter understands free speech as being liable to being used as a tool of oppression.

The letter writers go on to explain that truth—apart from the truth of their own understanding—is a myth. This is the common opinion taught on today’s campuses, the fruit of over a century of Western philosophy criticizing the idea that truth is possible.

The letter states: “The idea that there is a single truth–’the Truth’–is a construct of the Euro-West that is deeply rooted in the Enlightenment. … This construction is a myth and white supremacy, imperialism, colonization, capitalism, and the United States of America are all of its progeny.”

Implicit in the letter is the view that, in the absence of any common truth, an individual can only act on the basis of his or her will, an irrational drive for something.

What is real for the letter writers, and provides a basis for action, is the dynamic of the oppressor and the oppressed. This dynamic is fundamental to Marxism, but oppression is here understood primarily in terms of identity—sex, race, gender, and sexual orientation—rather than class.

Stanley Kurtz, senior fellow at the Ethics and Public Policy Center, wrote in an article for the National Review: “A great many of the Sixties radicals rejected classical-liberal conceptions of freedom in favor of a neo-Marxist analysis. In this view, free speech and constitutional democracy are tools used by the ruling class to suppress dissent and protect an oppressive society.”

Those radicals used the tenure system to become “the most powerful plurality in the university as a whole” and are the teachers of students who are now skeptical of free speech.

Mac Donald told The Washington Times that the mob that prevented her from speaking on April 6 was “another outbreak of student totalitarianism.”

“They’re firmly convinced that a certain point of view is a form of violence,” Mac Donald said, “and they’re therefore entitled to use violence to shut it down.”

Charles Murray, the author of “The Bell Curve” and “Coming Apart,” experienced the violence of a mob determined to prevent him from speaking at Middlebury College on March 2.

He wrote: “The people in the audience who wanted to hear me speak were completely cowed. … A campus where a majority of students are fearful to speak openly because they know a minority will jump on them is no longer an intellectually free campus in any meaningful sense.”

The ideas about free speech that have gained currency on our campuses have provided a rationale for, and have opened the door to, the political thuggery of a group like the Antifas, the group that attacked the Trump rallies in Berkeley.

On college campuses, the Antifas seem to operate like a guerrilla army, emerging out of groups of students to attack and then becoming invisible by retreating back into the group, which closes behind them.

The Antifas are made up of anarchists and communists. If one visits their online forums, one finds messages illustrated with communist images and symbols, and discussions of how many Antifas are communists and how many are anarchists.

In any case, both anarchists and communists are in principle hostile to our constitutional order.

Unfettered free speech and reason are fundamental to that order. Near the beginning of “The Federalist Papers,” the book written by Alexander Hamilton, John Jay, and James Madison to convince their fellow citizens to ratify the Constitution, a question is asked, of “whether societies of men are really capable or not of establishing good government from reflection and choice, or whether they are forever destined to depend for their political constitutions on accident and force.”

Up until now, the American experiment had seemed to settle that question, but the Antifas and the doctrines seeking to limit speech threaten to reopen it. As events unfold, the answer will depend on whether Murray is right that the majority has been cowed, or whether the majority can find its voice.

Correction: A previous version of this article incorrectly identified the college at which Ms. Mac Donald attempted to speak. The Epoch Times regrets the error.