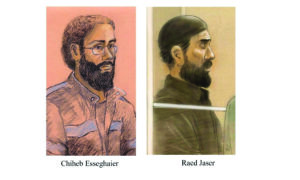 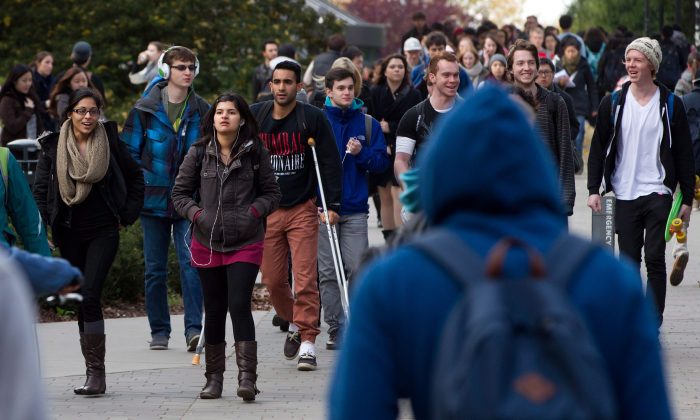 University of British Columbia students walk on campus, Oct. 30, 2013. Food bank use is up on campuses across Canada as tuition fees and living costs rise along with student debt. (The Canadian Press/Darryl Dyck)
Canada

Campus Food Bank Use Rising Along With Tuition, Costs

A new campus food bank at Saint Mary’s University in Halifax is part of a troubling trend, says the Canadian Federation of Students.

Similar services have sprung up on campuses across Canada as tuition fees and living costs have risen along with student debt, national chairperson Bilan Arte says.

“Student unions keep having to prioritize this issue because their members keep saying that they’re making these hard choices between tuition and their next meal. This is incredibly alarming for our organization.

“I think it really underscores for us the importance of talking about the inaccessibility of post-secondary education in Canada today.”

The federation, representing more than 500,000 members from 80 student unions, is calling on the federal and provincial governments to make higher learning more affordable.

Arte is among advocates who want to see the issue land on the federal election radar. She said the true extent of student poverty is largely unrecognized and under-reported.

“How many food banks opening on campus is it going to take before governments sort of realize that maybe there’s a problem?”

Financial aid officer Allen Wolfe of Saint Mary’s University said he helped set up the campus service after referring students to local food banks on a weekly basis. The plight of an international student who was going without meals convinced him to act.

“It wasn’t until a long interview with him that I realized he wasn’t eating,” Wolfe said in a telephone interview.

“He was starving, basically, but still maintaining perfect grades. That’s really what stuck with me this year and what pushed me forward to make this happen.”

Maximum student loan limits have not risen in the last two years as food, housing, and other prices have gone up.

Wolfe stressed that, like many campus food banks, the Saint Mary’s service relies on volunteers and is not funded by the university.

“There’s no budget line for this. It’s going to be regularly maintained by food drives.”

Maximum student loan limits have not risen in the last two years as food, housing, and other prices have gone up, he added.

Wolfe said he also sees many young people who haven’t learned how to properly budget for life on their own.

While campus-specific statistics are not available, Arte referred to a national study released last fall by Food Banks Canada. It found that community food banks across the country support about 841,000 people a month, up 25 percent since the economic slide of 2008.

“We know that campuses are microcosms of the larger society,” Arte said. “We have generally heard and have seen our members report an increase in the usage of their food banks on campus.”

A new poll just released by CIBC found that 51 percent of college and university students turned to their parents last year for help after running out of cash.

The online survey conducted Aug. 13-17 among 1,001 Canadian parents who are Angus Reid Forum panellists suggested 48 percent of students from families with incomes higher than $125,000 asked for more money, compared to 52 percent from families earning less than $75,000.