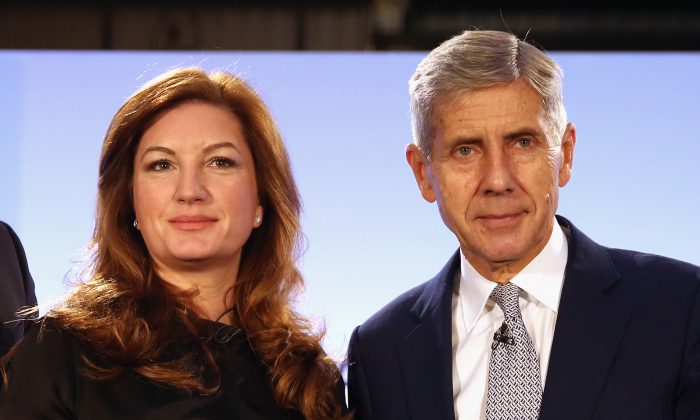 Baroness Karen Brady and Former Marks and Spencer boss and the current chairman of the 'Britain Stronger in Europe' campaign Lord Stuart Rose pose for a picture after a press conference at The Truman Brewery on October 12, 2015 in London, England. Stuart Rose was launching the 'Britain Stronger In Europe Campaign', setting out his vision to persuade voters to keep Britain in the EU. (Dan Kitwood/Getty Images)
UK

Supporters and opponents of Britain’s European Union membership squared off for battle ahead of a referendum due by 2017, with the campaign to stay in becoming the last to launch on Monday, Oct. 12.

“Britain Stronger in Europe” is being led by businessman Stuart Rose, who highlighted the economic and diplomatic benefits of Britain remaining in the 28-member bloc and warned of the dangers of leaving.

“Do we choose to be stronger in an economy that creates opportunity into the future and the power to shape events?” he said in a speech.

“Or do we choose to be weaker by taking a leap into the unknown, less able to influence global developments that may risk our economy and may compromise our safety?”

Rose, a Conservative lawmaker in Britain’s upper house of parliament and the former boss of department store Marks and Spencer, described the referendum as Britain’s most important vote in a generation.

The vote could be held as early as next year and could profoundly affect British politics and the country’s place as one of Europe’s economic hubs.

Britain’s membership of the EU has proven a divisive issue in the past, and has often led to damaging rows within the ruling Conservative Party.

The “In” campaign will include three former prime ministers, former Labour minister Peter Mandelson, and businesswoman and Conservative House of Lords member Karren Brady among other prominent figures.

The launch of “Britain Stronger in Europe” follows the rolling out of two campaigns for the country to leave the EU.
“Vote Leave”, including members of both the Conservative party and the main opposition Labour party, launched last week, while “Leave.EU” – led by the UK Independence Party (UKIP) – was unveiled in September.

UKIP leader Nigel Farage has played down reports of rifts within the camp advocating a so-called “Brexit”, saying the two campaigns are “complementary”.

He also dismissed the benefits of EU membership laid out by Rose.

“He argued that we are stronger in the world, have more influence and more clout. Has he forgotten that the United Kingdom no longer even has a seat on the World Trade Organisation and that Brussels now wants a single EU seat on the UN Security Council?”

“The EU has a star spangled banner. He’s welcome to it. I prefer the Union Jack.”

Prime Minister David Cameron, who leads the Conservative government, in 2013 promised to hold the vote amid pressure from UKIP and the euroskeptic wing of his own party.

Those campaigning to leave say Britain will be better able to control its borders, write its own laws and will be free of the economic crises that have roiled the EU in recent years.

But Cameron has vowed to renegotiate Britain’s membership before putting it to the vote, and is lobbying for more powers for London and the ability to opt out of closer political integration.

“What matters is that there is a proper and reasoned debate,” the prime minister’s spokeswoman said at a regular briefing on Monday.

“It will be an important choice facing our country and we need to consider it carefully.”

Legislation paving the way for the vote is being debated by the House of Lords, parliament’s upper chamber, having passed its first hurdle in June, although several other stages remain.

Polls indicate a narrow gap between those who want Britain to stay in the EU and those who want to leave.
A poll in September put the anti-EU camp ahead for the first time since November 2014.

According to the poll by Survation, 43 percent said they would vote to leave the EU, compared to 40 percent who would stay, with 17 undecided.