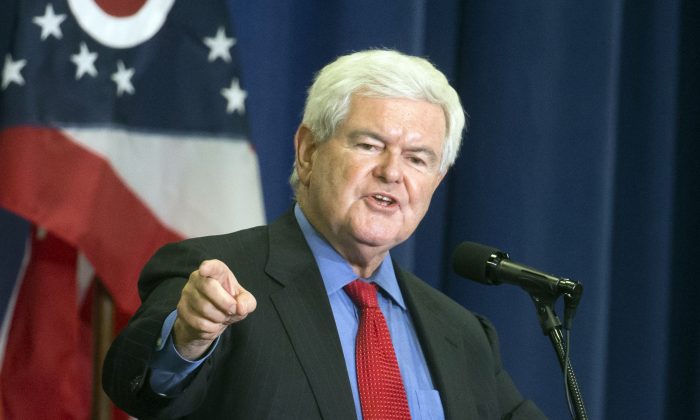 FILE - In this July 6, 2016, file photo, former House Speaker Newt Gingrich speaks before introducing Republican presidential candidate Donald Trump during a campaign rally in Cincinnati. Fox News says it is suspending its contributor agreement with Newt Gingrich "due to the intense media speculation" about him as a potential vice presidential candidate of Republican Donald Trump. He joined the network in 1999, and his role was suspended in 2011 when he ran for president in 2012. He returned to Fox in 2015. (AP Photo/John Minchillo, File)
US Features

Democrats enjoyed a nine-point advantage in January 2021, but the year ended with the GOP in a five-point lead, Jones said.

The 14-point swing in favor of Republicans sparked comparisons among media pundits with 1994, when Republicans tapped into widespread voter dissatisfaction with then-President Bill Clinton and won majorities in the Senate and House of Representatives for the first time in 40 years.

Axios’ Mike Allen, for example, noted that the party identification numbers in 1994 swung from a seven-point Democrat advantage in the first quarter to a three-point Republican edge in the fall. Republicans gained 54 seats in the House and eight in the Senate that year.

Democratic strategist Robin Biro, a regional director for President Barack Obama’s 2008 campaign, told The Epoch Times on Jan. 18 that a better comparison is with the 2016 election.

Citing data from Gallup’s Party Identification Tracker, Biro noted that “data showed that the last quarter of 2021 indicated 28 percent of persons polled identified as Republican, 42 percent as independent, and 28 percent as Democrat.

“At first, those numbers look great for Democrats, and most Democrats would think that we are well-positioned and shouldn’t have much to worry about. But then a statistical analysis of all data sets going back to 2004 yielded that the most similar period during that time to what we are seeing right now was the last quarter of 2015 (during Obama’s ‘lame duck’ term).”

When Trump was inaugurated, Biro said, “Democrats like me thought, ‘How did this possibly happen?’ Easy, the universe of independents was 41 percent then and is now sitting at 42 percent. … Biden, for all practical purposes, is already a ‘lame duck’ president, just one year into his presidency.

“He says and does things that resonate with Democrats, yielding a party ID similar to Obama’s last term, but with Democrats like myself feeling we are in a state of unending inertness. We are looking right now for what’s next, who can get us out of the gridlock. Bottom line, the numbers may look great for Democrats at first glance, but are in fact deeply concerning in context.”

But Jim Manley, former communications director for then-Senate Majority Leader Harry Reid (D-Nev.), says, “The president has hit a rough patch, and when his approval ratings start climbing, these numbers will start improving as well.”

“When you look back to 1994, the parallels are unmistakable. The similarities between Presidents Joe Biden and Bill Clinton are striking. Both presidents rolled out unpopular policies. Clinton’s increase in the gas tax was a defining moment that angered voters much like President Biden is defined by his failed push to mandate that businesses fire workers who fail to follow federal COVID-19 policies,” Darling said.

“A Democratic Party agenda focused on transgendered rights, global warming, and defunding the police while ignoring supply chain issues, the many challenges to children’s education, and inflation is politically repulsive to voters.”

Democratic strategist Kevin Chavous sees trouble ahead for his party in the 2022 elections, due to Biden’s low approval ratings, but he offers a cautionary note for Republicans.

“Republicans should not celebrate their landslide just yet. Their biggest gain in this Gallup poll is among people who simply ‘lean’ Republican. The percentage of people who identify as Democratic or Republican are actually tied at 28 percent. This indicates that Republicans have picked up some ‘soft’ support that could flip back depending on what happens over the next several months,” Chavous told The Epoch Times.

Americans for Tax Reform President Grover Norquist told The Epoch Times: “It is completely credible, given everything Democrats said they were going to do, that people would sour on them. Their one argument is ‘Trump,’ but Trump is not on the ballot; these are their problems.

“There has been a secular trend for more people to identify as Republicans or vote Republican and there is every reason to believe this is one of those moments, as it happened when Reagan was president and as it happened in 1994, where they just got stronger.”

Norquist was part of then-future Speaker of the House Newt Gingrich’s (R-Ga.) inner circle during the GOP’s 1994 “Contract with America” effort.

The key fact about the November elections, according to Family Research Council President Tony Perkins, is that 2022 is unlike previous election years.

“It’s different from what we’ve seen in the past. Like it or not, we’re in an age of base elections, and by that I mean we have a nation that is politically and ideologically divided,” Perkins said.

“I think the shift in party preference is telling, but it is only the tip of the iceberg, as the more important factor is, I think, it reflects the enthusiasm of the party’s core constituencies. They are the ones that influence those that really don’t pay a lot of attention and there are quite frankly very few leaners who are not tethered to a particular party.”

What the Gallup data also shows, Perkins said, is that “a lot of people thought the grass was going to be greener on the other side with Joe Biden, but now, after a year, they’ve discovered it’s mostly manure.”