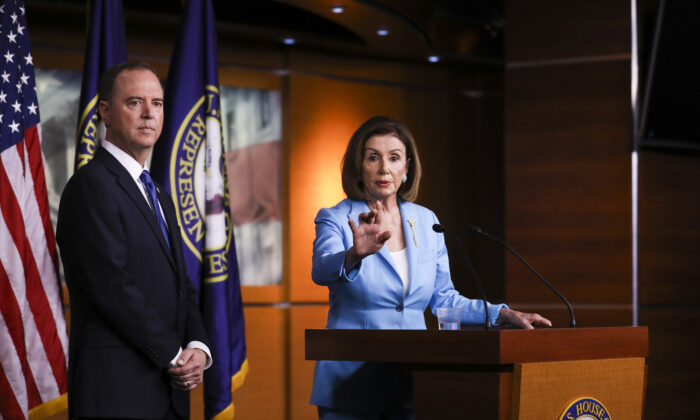 WASHINGTON—Democratic campaign professionals warned in interviews with The Epoch Times of multiple potential mistakes that could drive Speaker of the House Nancy Pelosi’s impeachment of President Donald Trump off the rails.

Their warnings were voiced in interviews earlier this week, but it appeared in the news conference on Oct. 2 that Pelosi and her key lieutenants were heeding cautionary advice very much like that shared with The Epoch Times.

The most obvious illustration of that new caution was Pelosi sharing the news conference lectern with House Select Committee on Intelligence Chairman Rep. Adam Schiff (D-Calif.) and deferring to him several times in responding to reporters’ questions.

“The Democratic leadership and Chairman Schiff need to be careful here,” said Jim Manley, former communications director for Senate Majority Leader Harry Reid (D-Nev.). “They still have a lot of educating of the public to do, despite the recent uptick in support for impeachment.”

He was referring to Pelosi’s previous strategy of using multiple House committees, including most prominently the intelligence, judiciary, and oversight panels, to energize the Democrats’ impeachment effort.

Judiciary chairman Jerry Nadler (D-N.Y.)—who had been most prominent in the impeachment drama—was notably not with Pelosi and Schiff at the lectern on Oct. 2.

Manley also noted that “there is a lot of pressure from some on the left to make this as broad and sweeping an investigation as possible. … The Speaker, correctly in my opinion, has narrowed the focus to a few easy-to-understand themes.”

Thus, in their responses to reporters’ questions on Oct. 2, Pelosi and Schiff repeatedly reiterated their core impeachment claim that Trump committed an impeachable offense by allegedly threatening in a July 25 phone call to suspend military aid to Ukraine if that nation’s officials didn’t investigate the actions of former Vice President Joe Biden and his son Hunter.

Biden is a leading Democratic candidate to oppose Trump in the 2020 presidential election. He is seen on a video made public in 2018 boasting of telling Ukraine officials in a 2016 meeting “you won’t be getting the billion dollars” if they didn’t fire a particular prosecutor.

That prosecutor was investigating an energy company that was paying Hunter Biden $50,000 in monthly consulting fees despite his lack of experience in the energy field.

Another Democratic consultant, Spencer Critchley, told The Epoch Times that Pelosi and her Democratic colleagues should “take a stand, stick to it, and be seen sticking to it” because “the smoking gun is right there in the transcript, in plain English, showing the president doing something anyone can see is just wrong.”

Just as Critchley recommended, Pelosi and Schiff repeatedly during the news conference focused on the call transcript, with Schiff at one point describing the president’s call as “an effort to coerce a foreign leader to create dirt that he can use against the political opponent.”

Schiff was responding to a question about whether a formal impeachment authorization vote will be held in the House. Pelosi claimed such a vote is not a constitutional requirement. The vote would also empower House Republicans to issue subpoenas.

Critchley further warned Democrats that “under no circumstances should they let any more witnesses humiliate them like Corey Lewandowski just did,” referring to the latter’s Sept. 17 testimony before Nadler’s committee when the former Trump campaign manager at times mocked the impeachment inquiry.

Just as Critchley suggested, Schiff warned Trump on Oct. 2 that “we’re not playing around here.” Schiff also announced a new subpoena to the White House, and he vowed that “stonewalling … will be considered further evidence of obstruction of justice.”

Another Democratic campaign professional, Max Burns, told The Epoch Times that “it will be key for Democrats to uncover who in the White House proposed reclassifying the call, and to uncover the full contents of all calls moved to the code-word database.”

The White House subpoenas Schiff announced on Oct. 2 may well be focused on the code-word protected database where the call transcript was stored.

Correction: A previous version of this article incorrectly stated the year of Joe Biden’s Ukraine meeting. The correct year is 2016.