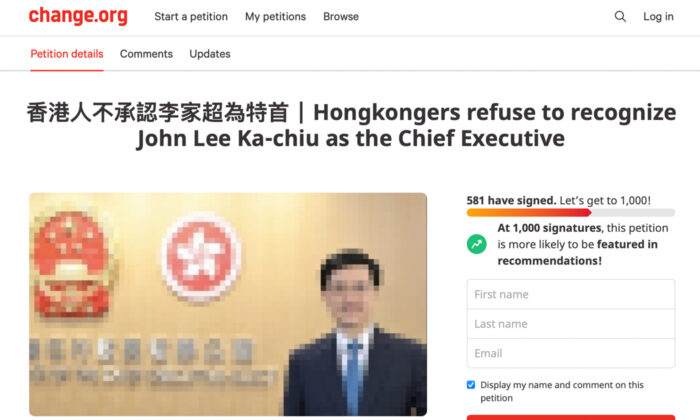 Overseas Hong Kong people's groups and former Hong Kong lawmakers launched a joint signature campaign online on June 13, 2022, claiming that the chief executive designate, John Lee Ka Chiu, does not have the people’s mandate and is only a puppet appointed by Beijing.(screenshot from internet)
Hong Kong

A number of overseas Hong Kong people’s groups and former Hong Kong lawmakers launched a joint signature campaign online, claiming that the chief executive designate, John Lee Ka Chiu, does not have the people’s mandate and is only a puppet appointed by Beijing and that he is not recognised as the Hong Kong Chief Executive (CE).

They also do not recognise the dictatorship of the Chinese Communist Party (CCP). Up till the evening on June 15, 2022 Hong Kong time, there had been about four hundred people participating by signing in. The sponsoring group lamented that under the shadow of the “Hong Kong National Security Law,” connection with any organisation in Hong Kong had been curtailed and there are no channels for promoting their ideas. But they insist that no matter how insignificant their actions may be, they insist on doing so regardless.

The joint signature campaign was held from June 13, 2022 on change.org. The list of sponsors continues to grow and to be updated. As of the evening on June 15, Hong Kong time, there are six overseas Hong Kong groups and sixteen individuals. Groups like, Hongkongers in Britain (英國港僑協會), Scottish Hongkongers (蘇格蘭香港人), Re-Water, Hong Kong Committee in Norway, Cardiff Hongkonger Group, are represented.

The joint statement, written in both English and Chinese, is titled, “Hong Kong People do not recognise Lee Ka Chiu as the Chief Executive (CE) of Hong Kong.” It pointed out that once he is sworn in by the CCP to become the CE on July 1, “Hong Kong will be plunging into a police state that suppresses Hongkongers with violence and draconian laws.” He is a puppet chief executive appointed by Beijing under the guise of an “improved electoral system,” where 1,461 election committee members (out of 1500) cast their “for” votes. This seems an extremely  high ‘yes’ vote of 99 percent, yet if counting the number of eligible voters in Hong Kong this represents a meagre 0.0002 percent.

The joint statement further pointed out that Lee, a former police officer, not only did not have the mandate of the people, but also encouraged his subordinates to harm Hongkongers brutally. Under his reign over 10,000 people had been arrested during the anti-extradition movement, in which 2,974 were indicted, with 1,815 people having completed their trials, with a conviction rate of 67 percent. There were also cases where more than one hundred people have been imprisoned for more than a year without trial.

The statement also cited Article 45 of the Basic Law, which states that the Hong Kong’s chief executive will eventually be elected by universal suffrage, but this, “just like the Sino-British Joint Declaration, the CCP claims is only a historical document, and just turns a deaf ear to it.”

Don’t Forget to Remember What We Want

The initiating group hope to express the anger of Hong Kong people and remind them to never forget their original intention.

The spokesperson for “Re-Water,” one of the groups that has been launched by overseas Hong Kong people, said, “I hope to gather strength again to express the anger of Hong Kong people, and to tell the world that Hong Kong people will never forget their original aspirations and insist on fighting for freedom and democracy.”

“Re-Water” said that while overseas Hong Kong people are in a relatively safe place, they hope that on the day Lee takes office, they should tell him that “You are actually not something that Hong Kong people recognise when you come to power,” in that sense he hopes Hongkongers should make their voice heard by signing up. However, under the shadow of the “Hong Kong National Security Law,” people must be concerned about the possible risks and understand that such an act in Hong Kong is dangerous. Therefore, they can choose not to display their names on the joint website when signing.

The organisation believes that if enough people participate in this signature campaign, when Lee is appointed as the chief executive, it may anger and embarrass the CCP, who will then understand that Hong Kong people,”do not tolerate whatever they do.”

Do As Much As You Can

It is understood that under the National Security Law, a lot has changed. Anyway, the motto remains “Just do what we can do!”

“Re-Water” lamented that this is “essentially very different” from similar previous campaigns in Hong Kong. In the past, everyone only cared about whether they agreed with the points in the statement. It was relatively easy to find a sponsor and push for a joint signature. But now they must consider whether they should worry also about the effect on the people around them after signing. Especially true is that they have no contact with any organisation in Hong Kong, which means there is one fewer channel to push locally.

Another indication of the difference between this one with previous activities is; after it was started, “Re-Water” was still unable to share it on social platforms in Hong Kong as it was worried that people in Hong Kong would be at risk of arrest. In fact, those who most want to participate, I believe, are the people in Hong Kong. But because they were worried about the danger, they did not pass it to them to sign, which shows that today’s joint signature is fundamentally different from the past.

When asked about the expectations and effectiveness of the joint signing, “Re-Water” responded that even the big countries could not prevent Putin from invading Ukraine. Compared with that, “What can the people of Hong Kong do to beat the giant CCP. They have no way to do anything that is guaranteed to have a positive result. What is your goal? What can you do to the other side. But now if you do nothing, that will be in the CCP’s favour. You use, ‘the power of the powerless’ to express what you think should be right. At present, Hong Kong cannot even do it together. So, no matter how trivial it is, do your best to do whatever you can.”

Another former Kwai Tsing district councillor, Kwok Tsz Kin, who initiated the joint signature programme, said that “This time the joint signature was initiated by a number of former elected members. Together they hope to point out that although the ‘Hong Kong communist government’ has conducted an election of the chief executive in Hong Kong, it is different from previous ones that had nominations by citizens. Then the representatives of the Legislative Council and the District Councils were elected by one person, one vote. Even though Lee Ka Chiu got 90 percent of the votes, nobody  should be misled and must express their reservations about the legitimacy of this election and that of the resulting chief executive designate.”