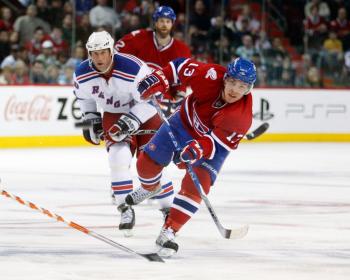 By Dane Crocker
Print
The New York Rangers failed to hang on to two two-goal leads in losing to the Montreal Canadiens 5–4 on Saturday night in Montreal.

The Rangers bounced off a season opening loss to win seven straight games; however, they looked mediocre in two losses heading into Montreal.

They met a Canadiens team that has been experiencing an opposite swing in momentum. Starting their year off poorly, the Canadiens have since been showing signs of turning things around.

In a bit of a surprise move, the Canadiens started their No. 2 goalie Jaroslav Halak, keeping Carey Price on the bench for the third straight game.

Saturday night also featured the Canadiens Scott Gomez and Paul Mara playing their first game against their former team. The same could be said for New York native Chris Higgins, who used to play for Montreal.

Gomez managed to sting his old team early, helping to set up a Mike Cammalleri goal on a three-on-two rush early in the first period. Gomez passed the puck to Brian Gionta, who got knocked down as he drove to the net, but still managed, from his stomach, to get the puck across the crease to Cammalleri. Camalleri shot it past Lundqvist into a wide open net.

In the second period, on the tail end of a Rangers' power play, Brandon Dubinsky coughed up the puck, which led to a two-man breakaway for Montreal, which scored making it 3–2 Rangers. On the play Dubinsky also slid into Lundqvist, pushind his leg into the post. Lundqvist was injured in the play, but stayed in the game.

The Rangers restored their two-goal lead off of a Marian Gaborik breakaway. He was sent in by Enver Lisin and slid the puck under Halak.

The Canadiens then came back to tie the game by the end of the period, with goals from Marc-Andre Bergeron and Cammalleri, his second.

The third period was up-and-down, producing several scoring chances by both teams, but no goals.

It wasn’t until overtime that a puck again hit the back of the net.

In what started as a harmless looking rush, Cammalleri picked up the puck inside his own blue line. He picked his way carefully through center ice, creating a gap in the Rangers' defense. He then accelerated into the Rangers' zone and cut into the slot, ripping a wrist shot over Lundqvist’s glove hand and into the top corner.

“He just beat me, fair and square,” said Lundqvist, who stopped 26 shots in the 5–4 loss. “When you give a player like that time and space, it’s tough.”

It was Cammalleri’s first hat trick with Montreal.

“It’s a special night,” he said. “It’s early in my career with Montreal and it was a Saturday night—I won’t underplay that.”