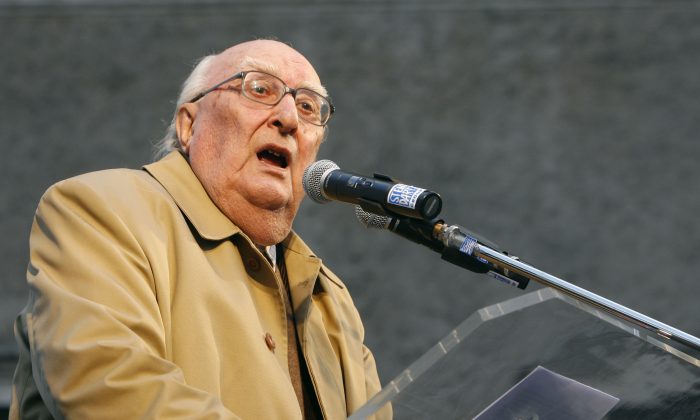 Italian author Andrea Camilleri makes his point during a demonstration against the Vatican's influence on the ongoing right-to-die debate, in Rome on Feb. 21, 2009. (Alessandra Tarantino/File Photo via AP)
Entertainment News

ROME—Author Andrea Camilleri, creator of the best-selling Commissario Montalbano series about a likable, though oft-brooding small-town Sicilian police chief who mixed humanity with pragmatism to solve crimes, died in a Rome hospital Wednesday. He was 93.

Italy’s RAI state TV, which produced wildly popular TV versions of his detective stories, interrupted its programming to announce his death and comment on his works.

Rome’s hospital system also announced the death, a month after the long-ailing Camilleri was hospitalized with heart problems and complications from a broken hip.

Camilleri’s books—most set in his native Sicily—sold some 25 million copies in Italy, where literary best-sellers are usually measured by the tens of thousands.

He had legions of readers overseas, too, thanks to the enduring popularity of his character, police chief Salvo Montalbano.

Italian state TV versions of the series were so popular that even repeats consistently snagged the highest audience ratings. The shows were also exported to Latin America, Australia and across Europe.

The Italian actor who played Montalbano in every episode, Luca Zingaretti, wrote on Instagram: “Farewell Maestro and friend.”

Referring to how his character would brusquely answer his phone, Zingaretti added that “every time I will say, even alone, in my head, ‘Montalbano sono’ (it’s Montalbano), wherever you went, you will smile, maybe smoking a cigarette and winking at me in a sign of understanding, just like the last time we saw each other,” in Sicily.

Camilleri’s position at the top of the book sales charts in Italy—he often had several books high in the rankings in the same week—was even more remarkable because the author sprinkled many of his works with words that many Italians aren’t familiar with. He affectionately borrowed from the dialect of his Sicilian youth, which Camilleri saw as better lending itself to expressing characters’ emotions.

Camilleri employed a brilliant ear for dialogue, drawing on his many years as a theater, radio and TV director and scriptwriter before his literary career took off when he was approaching old age.

Indeed, TV adaptations of the Montalbano books used generous chunks of dialogue straight out of the printed pages, so smooth was the transition from book to screen.

“After 30 years in the theater as a director, dialogue for me becomes fundamental in the structure of the novel,” Camilleri told The Associated Press in an interview in his Rome apartment in 2009.

The shows hooked millions of viewers with picture-postcard views of Baroque Sicilian towns. Tourists vied for turns to eat in the seaside trattoria where scenes of Montalbano’s dining were filmed. Between filming seasons, they traipsed through the beach town of Punta Secca to photograph the seaside house with inviting terrace where Montalbano “lived” and took dips in the same waters where the character swam to clear his head when sleuthing got heavy.

“I don’t believe there has ever been another Italian author with so many books translated into English” in just a few years, Harvard University Romance languages professor Francesco Erspamer said. Camilleri’s works were translated into some 30 languages, including Chinese.

While the Montalbano police stories shot him to fame, Camilleri was versatile in his output. Among his works are a fictionalized biography of Nobel laureate Luigi Pirandello, who was born not far from Camilleri’s hometown, and a dark novel about a sexually abused Sicilian boy’s childhood during Fascism.

He produced his 100th book in 2016, when he was 90. The plot of “L’altro capo del filo” (The other end of the thread), a Montalbano story, deals with the drama of thousands of migrants reaching Sicilian shores after rescue at sea. By the time he wrote it, poor eyesight, gradually fading due to glaucoma, had forced Camilleri to dictate his novels to his faithful assistant, instead of creating them on his typewriter, where he used to work every day from before dawn for three hours.

One of his final works, “Esercizi di memoria,” (memory exercises), was published in 2017 and consists of 23 stories, essentially recollections from his life and a tribute to it, which he dictated over the course of 23 days in summer 2016.

“Every so often, I put a hand in a pocket and caressed a colored stone, the tangible sign that one time the grace to catch a glimpse of beauty was granted to me,” Camilleri wrote, reflecting on his blindness.

“If you can keep your brain functioning, old age doesn’t exist. On the contrary, it’s a richness,” the author told La Stampa.

Montalbano worked in the fictional town of Vigata, inspired by the port town where Camilleri grew up, Porto Empedocle. The town was also the birthplace to two other Italian literary giants, Luigi Pirandello and Leonardo Sciascia.

His first novel languished for 10 years, largely because the dialect sprinkled into the characters’ conversations, scared off potential publishers, according to Camilleri. By the time his first novel was published, in 1978, Camilleri was 53.

Montalbano solves crimes by pondering the psychological weaknesses of the suspect. He intuitively understands human weaknesses, because he himself has so many.

Women—voluptuous, sexy characters Montalbano interviews during crime investigation—tempt him, and he wrestles with his remorse for the faithful girlfriend he often forgets to call at the other end of Italy. Phone calls from other police to alert him to a newly discovered body interrupt him just as Montalbano relishes digging into the latest exquisite dish cooked up by his housekeeper.

Plots of the detective series were inspired by odd crime stories Camilleri stumbled on while scouring local newspapers.

In the AP interview, Camilleri, chain-smoking as always, in his apartment near RAI’s office, said he resisted giving Sicily’s most famous bad guys—the Mafia—a prominent role because he didn’t want to somehow “idealize” Cosa Nostra.

But he did write a book about convicted Mafia chieftain Bernardo Provenzano, who was captured in 2006 at a Sicilian farmhouse after 40 years on the lam. Palermo prosecutors gave Camilleri all the typewritten notes the fugitive Provenzano used to communicate with his henchmen. Camilleri used the proceeds from the book, “You Don’t Know” to help set up a foundation for children of police officers slain by Cosa Nostra.

Camilleri didn’t aim for Italy’s highbrow literary circles, where culture pages of newspapers are filled with esoteric essays. “If I write a novel,” Camilleri said, “I hope to have the biggest number of readers possible and don’t presume to write novels for an elite.”